The cryptocurrency market is bleeding on a wide scale, led by Bitcoin’s price drop to the support at $11,100. Data by CoinMarketCap highlights a significant drop in the total market capitalization from $389 billion on Wednesday to $372 billion at the time of writing. An increase in the trading volume from $80 billion to $106 billion also reflects the intense selloff.

BTC/USD is trading at $11,305 at the time of writing. The largest cryptocurrency has corrected lower by 0.82% on the day. Following the drop to $11,155, a reversal ensued pulling Bitcoin above $11,400. Bulls could not continue with the upward action as the seller congestion at $11,500 remained intact.

Ethereum is also bleeding after diving from the recent high at $489 to the support established at $420. Attempts have been made to resume the uptrend but selling activities at $450 are putting pressure onto the crypto. Ether is trading at $434 at the time of writing amid a growing bearish grip and high volatility. The path of least resistance is towards the support at $420.

Ripple has lost almost 2% of its value on the day. There was an impressive price action earlier in the week which catapulted the crypto above $0.30. Unfortunately, XRP failed to attract enough volume to sustain gains to the next key level at $0.3250. The bearish wave across the market carried XRP along with it, leading to losses that tested the main support at $0.26. For now, XRP is trading at $0.0.2706 while nurturing a bullish momentum towards $0.30.

Chart Of The Day: BTC/USD hourly

Ripple as expected at the beginning every month transferred 1 billion XRP tokens worth approximately $270 million from the company’s escrow wallet. The funds have been sent to three separate wallets (all belonging to Ripple). The colossal transaction was captured by Whale Alert, a bot that is used to highlighted huge amounts of cryptocurrency transactions. This money is mainly used by Ripple to run the operations of the company. Another transaction amounting to 133,152,655 was made by Ripple to its former CTO Jed McCaleb.

On the other hand, there has been a report of whales transferring huge amounts of Bitcoin and Ethereum in the last 24 hours. A transfer totaling $510 million in BTC and ETH took place amid the losses described above. 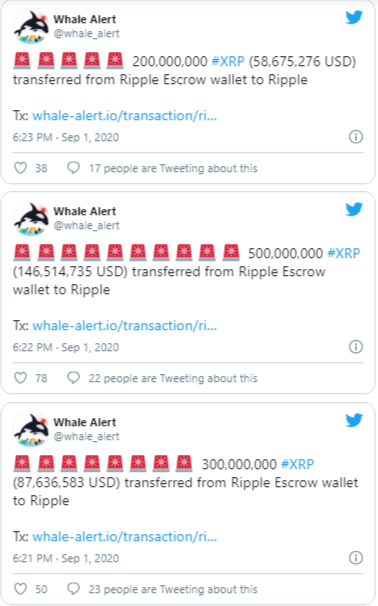 Although Ethereum has rallied significantly this year, the launch of ETH 2.0 upgrade remains unlikely. Despite the mishaps and delays the protocol’s upgrade has been facing in development, Vitalik Buterin, the co-founder of Ethereum remains confident that the launch will take place as scheduled.

The launch of Yearn.finance’s yETH vault has raised concerns regarding the danger of ETH 2.0 suffering a 51% attack. On the first day of its launch, yETH vault amassed over 137,000 ETH. It is believed that if the growth continues, yETH could hold over 67% of the entire Ethereum supply. Highlighting the 51% attack issue, Eric Wall, the chief intelligence office at Arcane Assets said:

ITT: We come up with fun ways yETH vault strategists can take advantage of the fact that yETH is probably going to control more than enough stake to 67%-attack ETH 2.0 PoS.

Vitalik Buterin in response to the above concern said that the propagator of such an attack “could attack *once* and then they either get slashed or soft-forked away and inactivity-leaked, and they lose their coins so can’t attack again.”

Twitter accounts belonging to prominent individuals have become a soft target for hackers. Not long ago Barack Obama alongside other influential individuals’ accounts was hacked. The hackers lured unsuspecting individuals to send Bitcoin to wallet addresses that were provided.

The Prime Minister of India, Narendra Modi is the latest victim of a hacking attack similar to the one above. His Twitter account was hacked by people operating under the alias ‘John Wick.’ Followers of the prime minister were told to “generously donate to PM National Relief Fund for COVID-19.” Two wallet addresses were provided; a BTC wallet address and an ETH wallet address. Blockchain data shows that no funds had been sent to the address before they were pulled down.

Here is what you need to know on Thursday, September 3, 2020. Markets: The cryptocurrency market is bleeding on a wide scale, led by Bitcoin's price drop to the support at $11,100. Data by CoinMarketCap highlights a significant drop in the total market capitalization from $389 billion on Wednesday to $372 billion at the time of writing. An increase in the trading volume from $80 billion to $106 billion also reflects the intense selloff. BTC/USD is trading at $11,305 at the time of writing. The largest cryptocurrency has corrected lower by 0.82% on the day. Following the drop to $11,155,…