Depending on your assumptions, an aggregate 1% institutional allocation to Bitcoin can easily bring Bitcoin’s market cap above $1 trillion.

This is why enthusiasts get so excited about the prospect of institutional inflows. 1% is a lot when everyone does it. 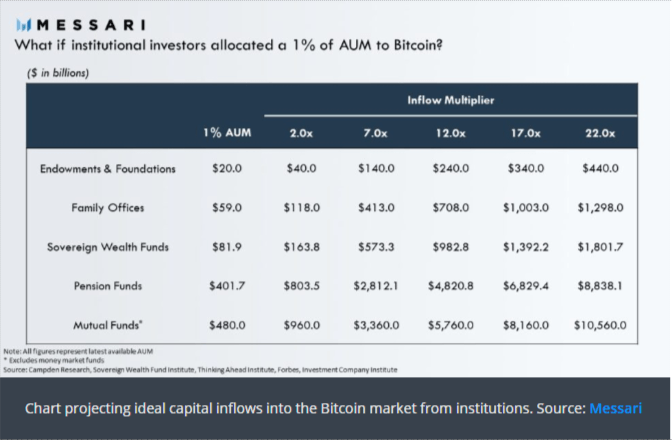 While Messari discussed the hypothetical factor that could take Bitcoin to $50,000, Bitcoin in the current market has dropped 1.21% on the day. Earlier this week the crypto surged to test $9,800 but failed to sustain the gains. In the meantime, BTC/USD is trading at $9,512 after correcting from the intraday low at $9,476.

Ethereum, the largest altcoin reversed the gains to $250 as quickly as it had gotten there on Wednesday. This was the second time Ethereum tested the same level this week. As discussed in the price analysis earlier, a double top pattern came into the picture, sending Ether back to $240. At the time of writing, the price is teetering at $243 amid a strong bullish momentum and high volatility. This means bulls are not ready to give put but are choosing to keep their eyes on the target at $250.

The veteran commodity trader Peter Brandt is not in good terms with the XRP community but anyway he hasn’t been a fan of the token for the longest time. In another tweet on June 24 and directed to the believers in XRP, Brandt revisited his past comments, referring to the cryptoasset as “a manipulated scam (IMO).

Ripple Labs has from the beginning owned the lion’s share of XRP total supply, something that does not seat well with Brandt. In fact, he says that eventually, XRP’s value will plunge to zero. At the time of writing, XRP is trading at $0.1866 after losing 1.18% of its value on the day. XRP stepped above $0.19 but hit a wall at $0.1902, culminating in the losses on the day.

EUR/USD tumbles to session lows near 1.1270 on US tariffs

New York-based Messari says that Bitcoin could hit $50,000 if institutional investors allocated 1% of portfolios to BTC. Ethereum free-falls from $250 back to $240 after a short-lived rally. Peter Brandt, a renowned commodity trader calls XRP “a manipulated scam” once again. The blockchain research and analysis firm Messari says Bitcoin has the potential to hit $50,000 as long as institutional investors decide to dedicate just 1% of their net funds to the digital asset. Messari released the “illustrative” analysis on Tuesday that discussed the scenario where all institutional investors made Bitcoin part of their portfolios. Note that in this…