The cryptocurrency market is mixed red and green. There was increased volatility toward the end of the trading session on Thursday. However, most digital assets encountered increased selling pressure during the Asian session on Friday. As we head into the European session, there are mixed signals for cryptocurrencies.

For instance, Bitcoin is slightly in the red after retreating from intraday highs at $9,848. Moreover, the price is dancing at $9,783 although it opened the session of the day at $9,790. Meanwhile, the existing trend is bullish amid a growing bullish momentum. On the flip side, volatility appears to be shrinking, further diminishing the chances of hitting $10,000 before the weekend session.

The fourth-largest crypto XRP, on the other hand, is bullish nor bearish at the time of writing. The price is balancing at the opening value of $0.2042. However, the trend is likely to lean to the bearish side in the short term. Support at $0.20 is still intact and able to keep the bearish pressure at bay and avert losses toward the next support at $0.19.

Chart of the day: BTC/USD daily

According to a report by Bloomberg, Tether (USDT), the largest stablecoin in the cryptocurrency industry is likely to continue with the impressive growth to an extent of toppling Ethereum from the second spot. Tether already displaced Ripple from the third position by market capitalization. It has a market cap of $9.2 billion compared to Ripple’s $9.0 billion. Ethereum, on the other hand, has a market cap of $27 billion. It would be a difficult and long task for Tether to take on Ethereum, however, if demand for the stablecoin continues, its market cap could improve significantly over time. 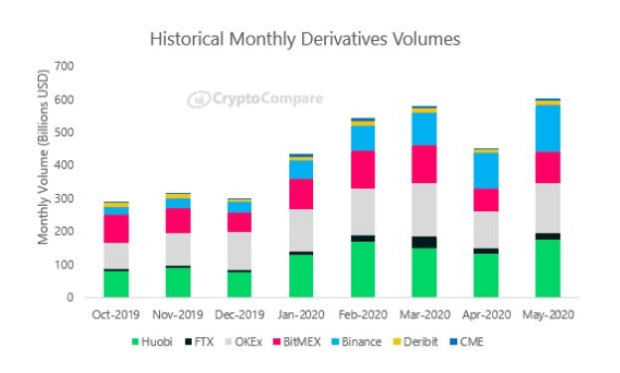 Data by aggregator platform, CryptoCompare shows that cryptocurrency derivatives monthly volume rose by one-third in May, hitting a new all-time high of $602 billion. The previous record of $600 billion was posted in March. Derivatives’ growth in the industry has been impressive as they currently take up to 32% of the market, an increase from 27% in April. Binance exchange and Huobi controlled approximately 80% of May’s derivative volume. Derivatives by CME group saw a 59% growth in May to $7.2 billion which still appears like a drop in the ocean compared to the $17 billion in volume for the market leader, Huobi.

This upgrade demonstrates the robust development underway on Ethereum Classic, as it is the third hard fork in the last year; and reflects the strong community consensus among ETC stakeholders.

The Office of the Comptroller of the Currency – in charge of regulating banks in the United States is said to be seeking the public’s opinion on digital activities among national banks and federal savings associations. They also include activities related to cryptos and digital assets. A statement by the OCC reckons that cryptocurrency is:

“Part of the agency’s effort to support the evolution of the federal banking system and its ability to meet the needs of the consumers, businesses, and communities it serves.” The organization added that “[c]omments received on this ANPR may inform the development of specific policy proposals or future rulemakings.”

Get the 5 most predictable currency pairs
Previous ArticleECB’s Panetta: Economic recovery in 2021-22 won’t make up for the lost ground in 2020.
Next Article US Dollar Index in 3-month lows near 96.40 ahead of NFP