The topic of Dogecoin seems to have resurfaced among celebrities, triggering a frenzy among investors and pushing the DOGE price higher.

Billionaire entrepreneur Mark Cuban announced that the NBA’s Mavericks’ sales have increased by 550% over the past month.

We have now sold more than 122k Doge in merchandise! We will never sell 1 single Doge ever. So keep buying.

Mark Cuban announced in early March that his team, the Dallas Mavericks, would accept Dogecoin as a form of payment.

The resurgence of celebrities’ involvement with Dogecoin could once again trigger a surge similar to early January rallies and send DOGE price flying.

Dogecoin price action appears to be contained within a potential ascending parallel channel. This setup is obtained when the series of higher highs and higher lows are connected using trend lines. So far, DOGE has formed two swing lows and is aiming for the second swing high.

At the time of writing, Dogecoin price was trading around the middle line of the ascending parallel channel. A decisive close above this barrier could send the meme coin flying toward the 141.4% and 161.8% Fibonacci extension levels at $0.124 and $0.199, respectively.

If the bullish momentum persists, DOGE could tap the ascending parallel channel’s upper trend line at $0.245. This move would indicate a 118% surge from the current price levels. 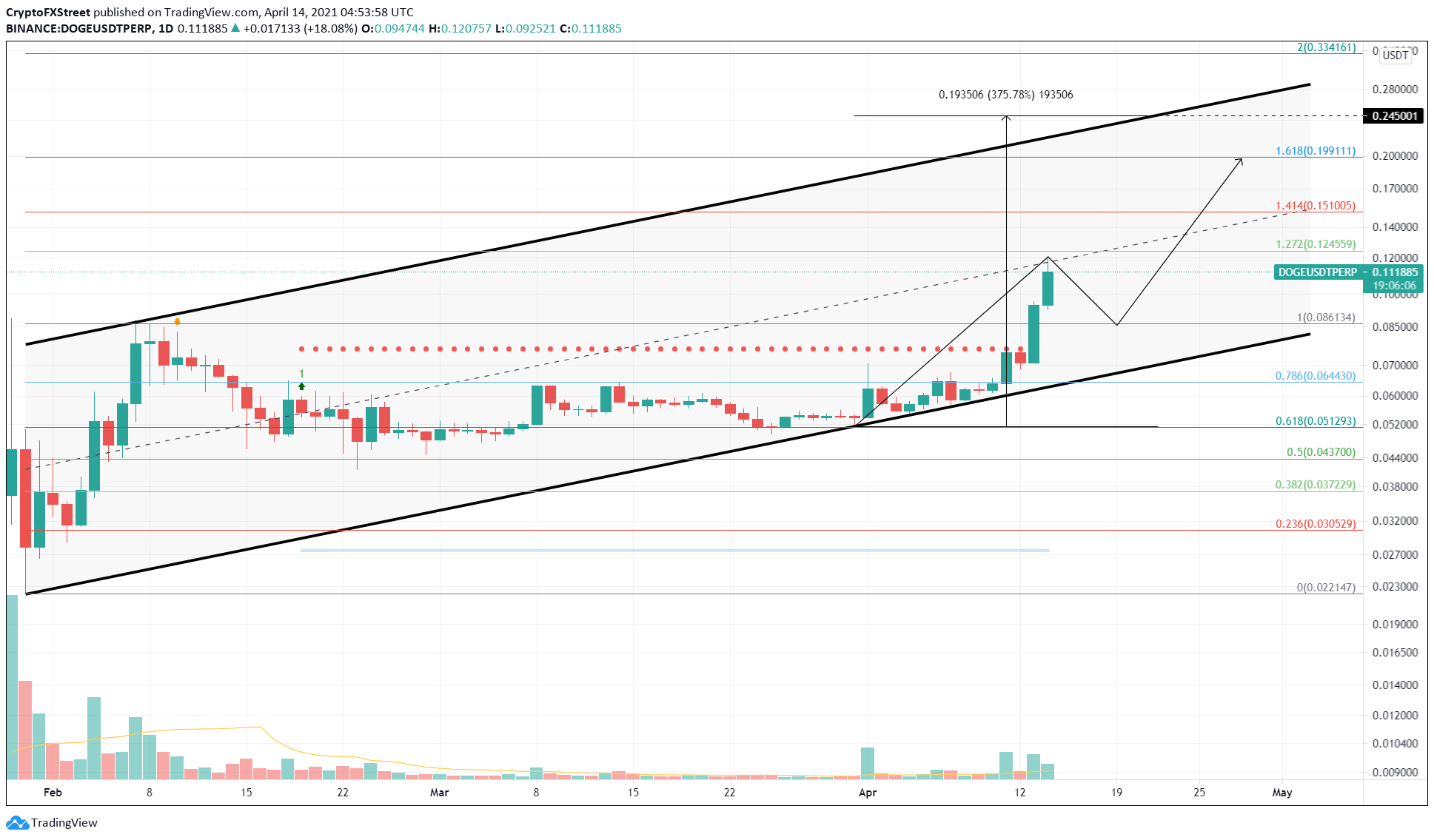 On the flip side, if investors begin to book profits, it would hamper the upswing. Regardless, if Dogecoin price fails to produce a decisive close above the 127.2% Fibonacci extension level at $0.124, which coincides with the ascending parallel channel’s middle line, a retracement seems likely.

Dogecoin receives fresh support from Mark Cuban and Guy Fieri. Dogecoin price surges 70% in less than 48 hours, hitting the middle line of an ascending parallel channel. A continuation of this bullish momentum could push DOGE up by 118% toward $0.245. The topic of Dogecoin seems to have resurfaced among celebrities, triggering a frenzy among investors and pushing the DOGE price higher. Mark Cuban announces massive Dogecoin sales Billionaire entrepreneur Mark Cuban announced that the NBA's Mavericks' sales have increased by 550% over the past month. Cuban's tweet read: We have now sold more than 122k Doge in merchandise!…