Home » Dogecoin’s 600% rally could jumpstart the next altseason

Dogecoin’s 600% rally could jumpstart the next altseason

Dogecoin has shocked many with its gigantic movement in price over the last 24 hours. Despite being ridiculed as a joke, DOGE has a far-reaching social media presence that cuts across all ages, perhaps due to the unserious tone it brings to the cryptocurrency industry.

The incredible rally to $0.0885 has stolen the spotlight from Bitcoin and top altcoins like Ethereum. It is believed that Dogecoin’s surprise rallies tend to signal the beginning of the much-talked altseason. Some analysts say that all the previous bull markets in altcoins have in away begun following an unexpected move in DOGE’s price, but is this true?

Dogecoin’s journey to acceptance in the cryptocurrency space has been a rollercoaster since its inception. The coin is almost a replica of Bitcoin but with humor. It tends to appeal to not inherently crypto enthusiasts, which explains the tremendous following on social media platforms like Twitter and Reddit.

According to ‘NebraskanGooner,’ a prominent trader and analyst, Dogecoin’s impact on other altcoins can be explained. In his opinion, Dogecoin attracts many people, including random participants who join the boat for fear of missing out (FOMO).

However, by the time they get to the boat, the Dogecoin ship is likely to have left and is somewhere in the deep seas. For this reason, these people look around for any other token to pump and dump. Often, they land on cryptocurrencies with mid-low market capitalizations.

Following the recent breakout, Dogecoin’s tweeter volumes hit 100,000. Among these, 50,000 are said to be unique tweets that are not bot-generated. The data can be confirmed by Santiment, a platform for on-chain analysis.

The pump in social media mentions began on January 28, increasing by nearly 2,000% in just 24 hours. Dogecoin-related tweets also surpassed those of Bitcoin in the 24 hours. This was the first time an altcoin has been tweeted more than the largest cryptocurrency.

The trading activity also went ballistic, rising by more than 3,000% to $25.7 million. According to CoinMarketCap, DOGE’s market cap is up 407% to settle at $8.9 billion. Dogecoin has made it to the top ten cryptoasset’s list, claiming the ninth spot. 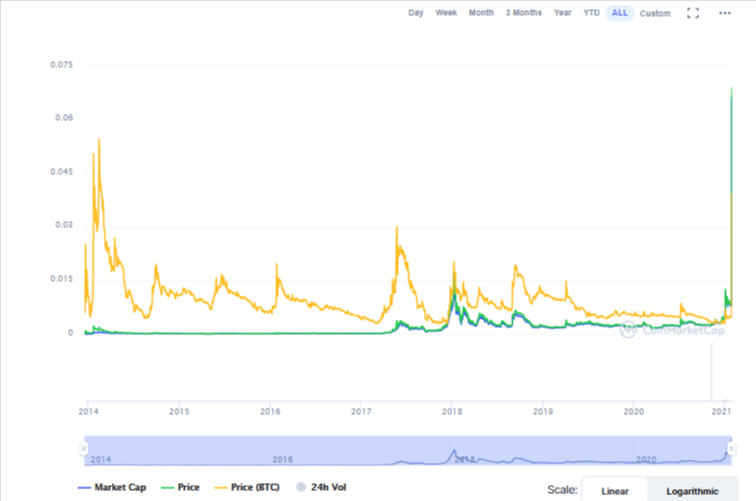 How altcoins reacted to the Dogecoin rally

Some selected altcoins have performed incredibly well since the spike in the value of DOGE. Stellar (XLM), for instance, broke out to post gains of over 30%. Ethereum was stable above $1,200 but stepped above $1,300 and closed in on $1,400 amid the DOGE rally.

Simultaneously, Ripple (XRP), an asset that has been in consolidation for a while, swung up over 10% to exchange hands above $0.29. Other altcoins performing tremendously over the last 24 hours are FTX Token (15%) and Terra (42%).

DOGE is trading at $0.056 at the time of writing. The crypto has already lost 40% from the recent high, suggesting a perfect pump and dump scenario. If formidable support is not established soon, these losses may extend below $0.05.

Buyer congestion is likely at $0.04 and could prevent Dogecoin from falling further down, mostly if support at $0.05 fails to hold. Besides, the investors who missed the pump could enter at this position and perhaps renew the uptrend for gains eyeing $0.1.

Dogecoin's sudden gigantic jumps in price trigger the altcoins' FOMO. DOGE-related tweets surpass Bitcoin's for the first time in history. A 40% correction from the recent highs highlights a perfect pump and dump scenario. Dogecoin has shocked many with its gigantic movement in price over the last 24 hours. Despite being ridiculed as a joke, DOGE has a far-reaching social media presence that cuts across all ages, perhaps due to the unserious tone it brings to the cryptocurrency industry. The incredible rally to $0.0885 has stolen the spotlight from Bitcoin and top altcoins like Ethereum. It is believed that Dogecoin's…