Elrond price is losing steam as it gets squeezed between the 200 four-hour moving average and the supply barrier at $126. Although the breakout could happen in either direction, a bearish outcome seems likely.

Elrond price action between February 9 and 22 shows the presence of strong sellers. Every price spike was met with increasingly aggressive sellers, which resulted in a series of lower highs bouncing off the horizontal support level at $126.

A descending triangle forms by drawing a trendline that connects these swing highs and the flat support. This technical formation is a bearish pattern and signals a reversal in price trend. The 41% target for this setup is determined by measuring the distance between the highest point of the descending triangle and the support line and adding to the breakout point at $126.

This puts Elrond price target at $73.

The breakout from the descending triangle pattern took place on February 23, when a four-hour candlestick closed below the horizontal support. This close triggered a sell-off that pushed EGLD as low as $98. However, interim bullish momentum pushed the price higher.

At press time, Elrond price is trading above the support provided by the 200 four-hour moving average (MA) at $111. Therefore, a four-hour candlestick close below this demand barrier would signal the continuation of the downtrend. In this case, EGLD will drop 30% towards its intended target of $73.

Supporting this bearish scenario is the resistance posed by the 50 and 100 four-hour MA and the SuperTrend’s sell signal present above the price. 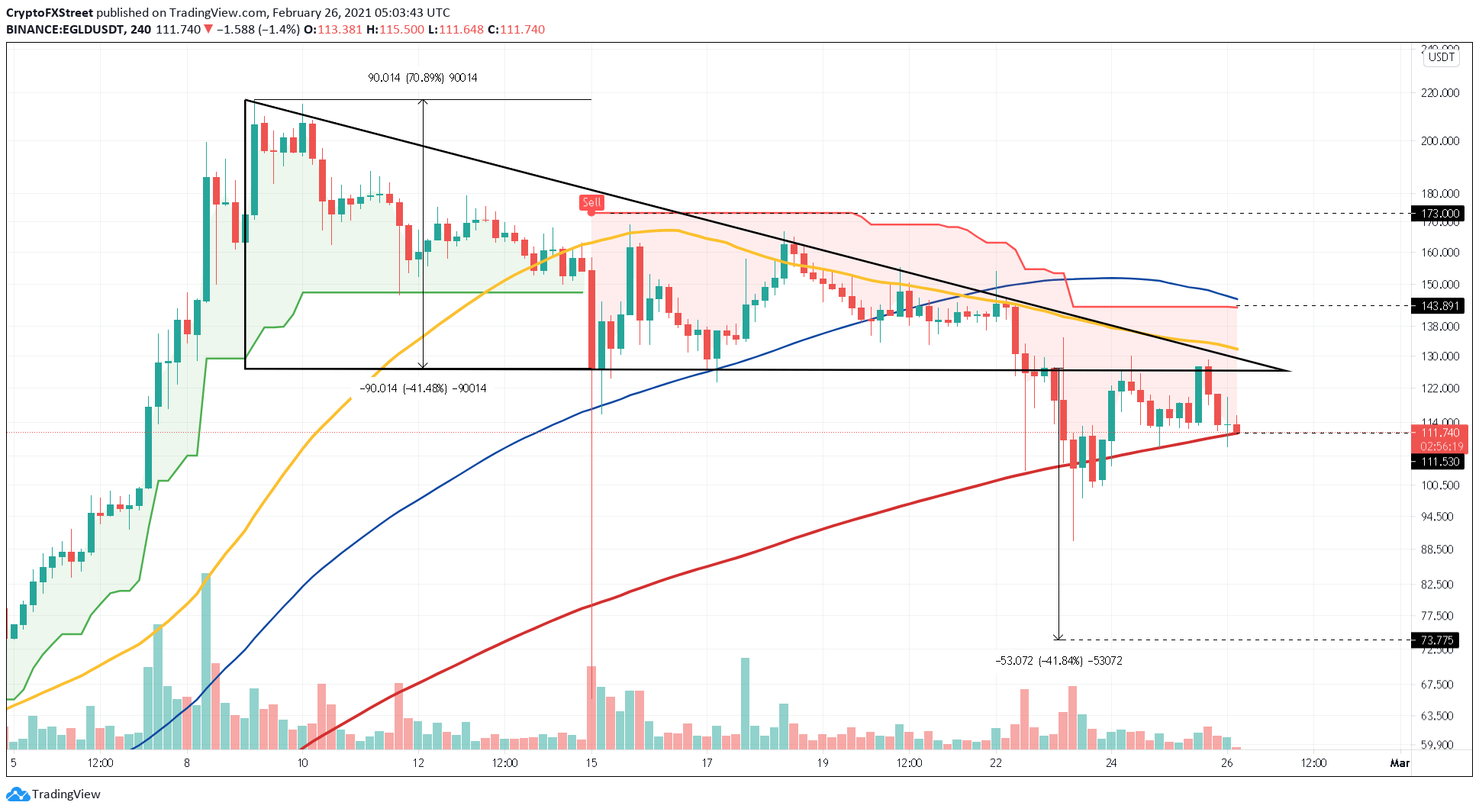 On the flip side, investors should note that a 4-hour candlestick close above $143, will invalidate the bearish outlook and confirm the start of a new uptrend. If this were to happen, Elrond price could surge 20% to hit $173.

Elrond price hints at a 40% sell-off as it broke out of a descending triangle pattern on February 23. A temporary spike in bullish momentum has caused an upswing to the triangle’s base around $126. A rejection below the 200 four-hour MA will signal the continuation of the downtrend to $73. Elrond price is losing steam as it gets squeezed between the 200 four-hour moving average and the supply barrier at $126. Although the breakout could happen in either direction, a bearish outcome seems likely. Elrond price delays the inevitable breakout Elrond price action between February 9 and 22 shows…