Elrond blockchain’s recent addition of Carpathian Stake to its network could prove helpful to its users and might even help give the EGLD price a nudge to ascend higher.

The Elrond blockchain and its developers have been in the vanguard for far too long, announcing major partnerships and developments. As of March 21, the team announced a new staking provider, “Carpathian Stake.”

From a popular mobile payments app to their “hypergrowth” campaign, Elrond has grown, and so has EGLD token’s price. However, this recent announcement puts a new spin on the staking game.

Usually, staking has a list of requirements and hefty upfront token deposits that deter market participants from having skin in this game. However, with Carpathian Stake, this is about to change.

Carpathian Stake is able to offer their customers full node ownership in a non-custodial manner while abstracting away any kind of technical complexity.

Additionally, the blog added that eGold holders have an opportunity to own “one or more Validator nodes without having to manage the underlying infrastructure.”

Elrond price could set up a new swing high

Elrond price has been producing higher highs and higher lows since February 22. Its recent 25% crash between March 10 and 15 formed the second lower low. Drawing a trend line along these swing points results in an ascending parallel channel formation.

This pattern has a bearish bias if the setup’s lower trendline is breached. However, until Elrond price slices through the lower boundary, investors can expect another leg to the upside. If this were to happen, ELGD needs to break past the immediate supply barrier at $145, coinciding with the 78.6% Fibonacci retracement level.

This move will establish a higher high and might provide the sidelined investors a reason to enter the market. In this case, EGLD could climb 15% to tap the recent high at $166 or surge another 18% to hit the 127.2% Fibonacci retracement level at $197.

Supporting this bullish outlook is the “buy signal” generated from the SuperTrend indicator on March 20. 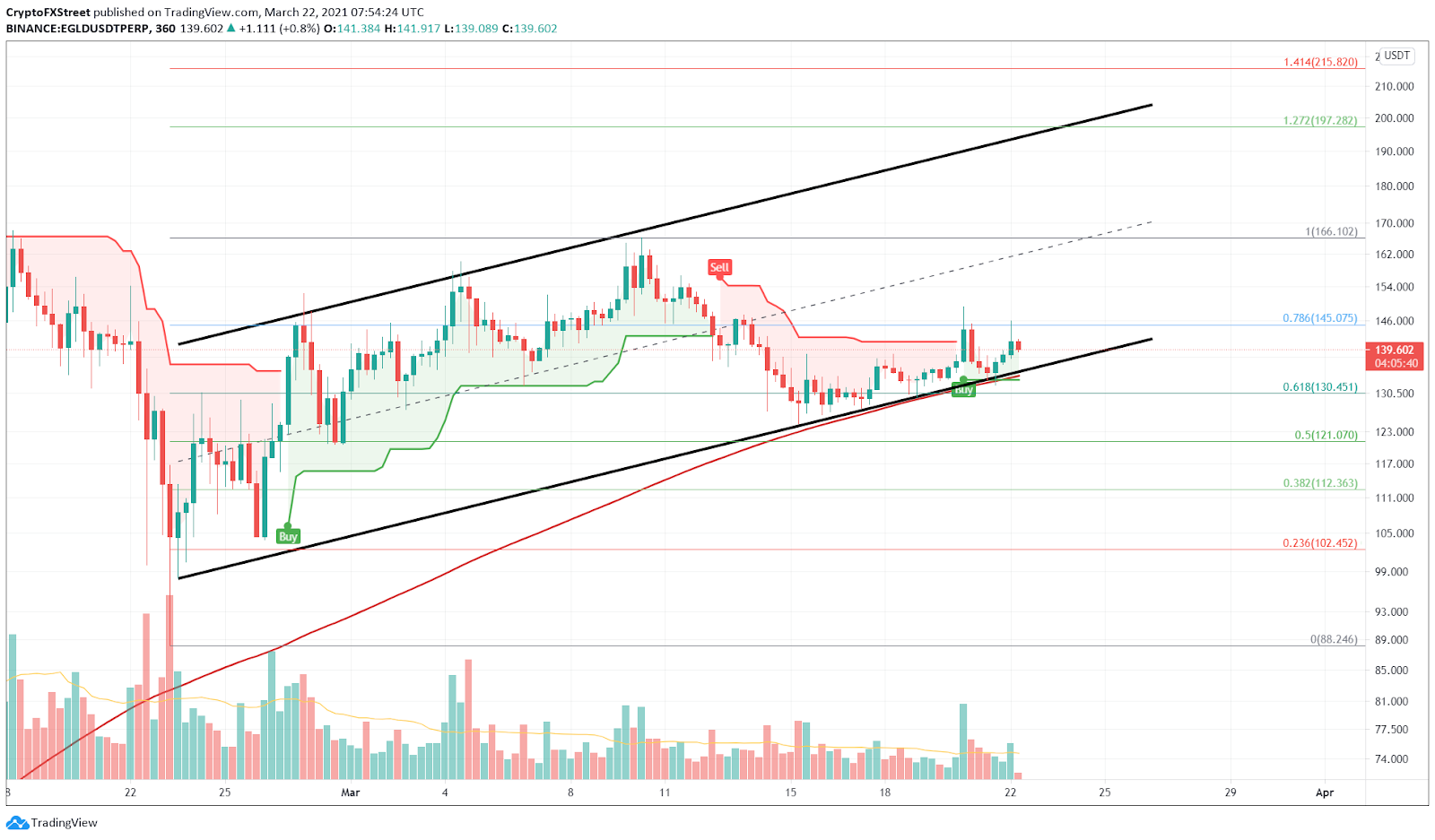 Regardless, the upswing in Elrond price action is solely dependent on a bounce from the lower trend line of the ascending parallel channel around $130. This level is critical since it is a confluence of the 61.8% Fibonacci retracement level, the 200 6-hour Simple Moving Average (SMA), and the base of the technical formation.

Only a massive spike in bearish pressure will be able to slice through it. In such a case, the EGLD price could slide 7% to the immediate demand barrier at $121. Following a breakdown of this level, the cryptocurrency could drop another 7% to $112.

EUR/JPY to plunge towards the medium-term uptrend at 128.37/30 – Credit Suisse

Elrond announced recently that Carpathian Stake is joining the network as a staking provider. eGold holders have an opportunity to own more than one validator node on the Elrond blockchain without worrying about the infrastructure. A bounce from the ascending parallel channel's lower trendline indicates that EGLD price could climb 40%. Elrond blockchain's recent addition of Carpathian Stake to its network could prove helpful to its users and might even help give the EGLD price a nudge to ascend higher. Staking without infrastructure The Elrond blockchain and its developers have been in the vanguard for far too long, announcing major…