Elrond could turn heads with its most recent update and catalyze the bulls to complete EGLD price’s last leg up.

In a recent update, Elrond announced the launch of Elrond Standard Digital Token (EDST) and Non-Fungible Tokens (NFT). This move will help overcome the need to deploy smart contracts for tokens and eliminate the maintenance costs associated with it.

The announcement stated that this upgrade is available on the devnet but will soon be launched on the mainnet. Regardless, the blog illustrates that the tokens launched on the Elrond blockchain will not require its smart contracts, which dramatically reduces the storage footprint and cost.

Another important implication is that a token transfer transaction does not need to be processed by the Virtual Machine. Instead, token transfers are done via a regular transaction, by adding the token ID and amount to be transferred into the data field. This increases the transfer speed and reduces the gas requirements down to just the regular TX cost + storage fee for the additional bytes of data in the data field.

EDSTs with “additional metadata” is what constitutes an Elrond NFT and SFT per the announcement. Moreover, this implementation enables high speeds and low costs for Elrond NFTs and SFTs minting, managing and transferring transactions.

Additionally, this update gels together all the DeFi 2.0 updates seen in the last couple of weeks on the Elrond blockchain. Hence, this is fundamentally bullish for the EGLD price.

Elrond price prepares for the last leg up

Elrond price broke out of a bullish pennant on April 2, triggering a massive upswing. This setup constitutes a sudden spike in EGLD’s market value, known as a flag pole, followed by a consolidation in a pennant.

A decisive close above the pennant’s upper trend line at $147.98 forecasts an 84% upswing to $272.86, determined by adding the flag pole’s height to the breakout point. 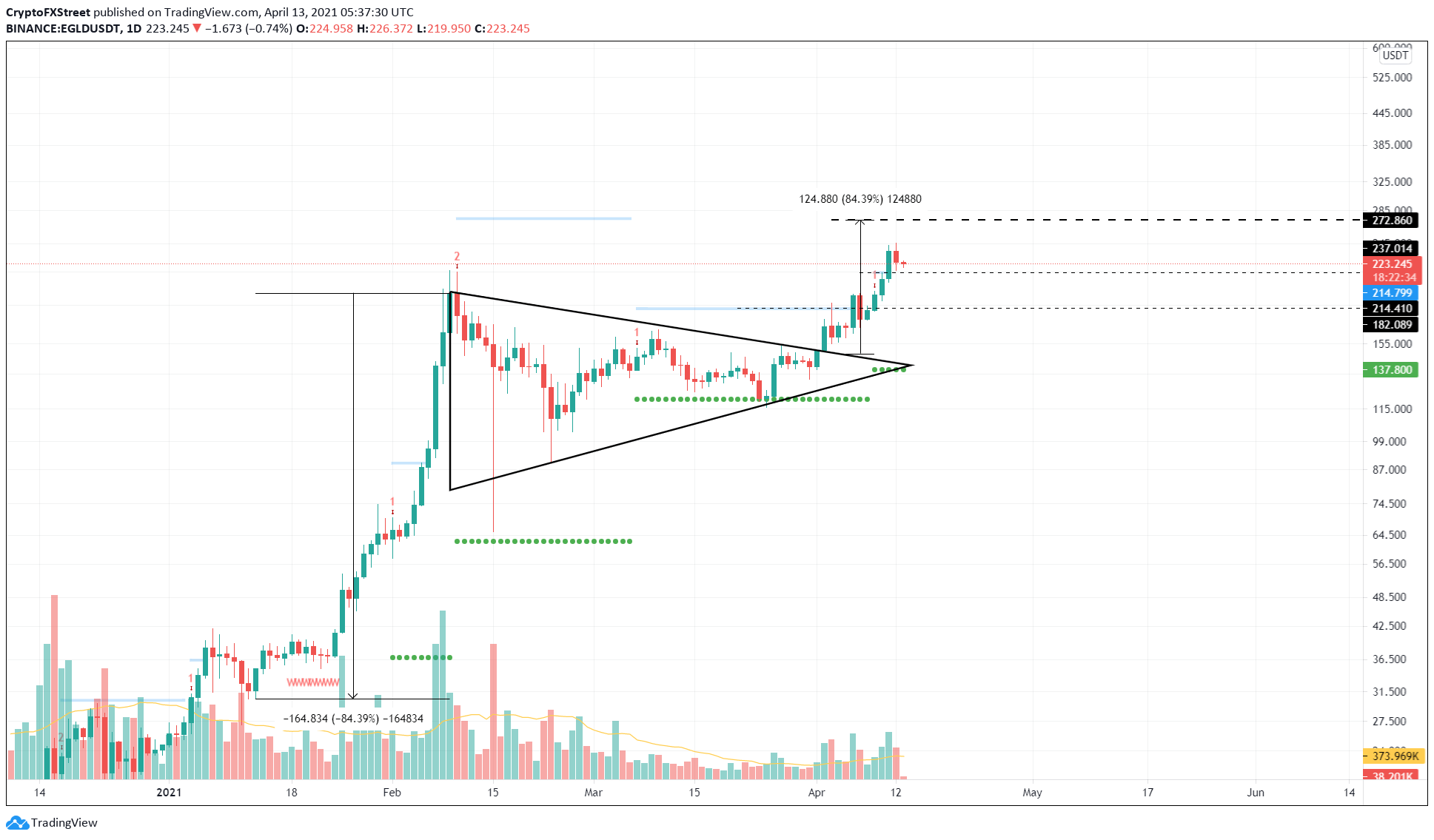 On the flip side, if the bulls fail to keep the price above the $214.41 support level, a 24% correction to the Momentum Reversal Indicator’s (MRI) State Trend Support at $138.61 can be expected.

Such a pullback will effectively put an end to the upswing and ensure a sideways move. If the buyers fail to rescue the price, EGLD could retrace 13% to the subsequent State Trend Support at $119.45.

GBP/USD remains below 1.3750 after UK GDP misses estimates with 0.4% in February

Elrond plans to integrate the EDST protocol into the mainnet via a major upgrade. The new standard increases efficiency vastly by reducing the need for smart contract creation and costs associated with it. EGLD price takes a breather before hitting its intended target at $272.86. Elrond could turn heads with its most recent update and catalyze the bulls to complete EGLD price's last leg up. Smart contracts not needed In a recent update, Elrond announced the launch of Elrond Standard Digital Token (EDST) and Non-Fungible Tokens (NFT). This move will help overcome the need to deploy smart contracts for tokens…