ETH/USD has been one of the best-performing coins out of the top-10 on Thursday. The second-largest digital asset price has gained nearly 4% since the beginning of the day and 4.5% since this time on Wednesday. At the time of writing, ETH/USD is hovering around $380. The coin is moving within a short-term bullish trend amid high volatility.

Ethereum’s price hit the bottom at $310 on September 5 and has been recovering slowly ever since. However, the critical barrier of $400 is still unbroken, which means the bulls are still hesitant at this stage. Let’s have a closer look at on-chain metrics and technical data to see if ETH has a chance to turn $400 into support once again and speed up the recovery.

ETH whales look at the bright side of things

Large holders, also known as whales, usually lay flat somewhere at a depth of the market. However, once they start moving, the market may go wild. According to the data provided by the analytical service Santiment, the number of users with over 100k ETH has been growing steadily since September 11. In less than a week, their population increased from 157 to 160, meaning that big investors increased their exposure to ETH. 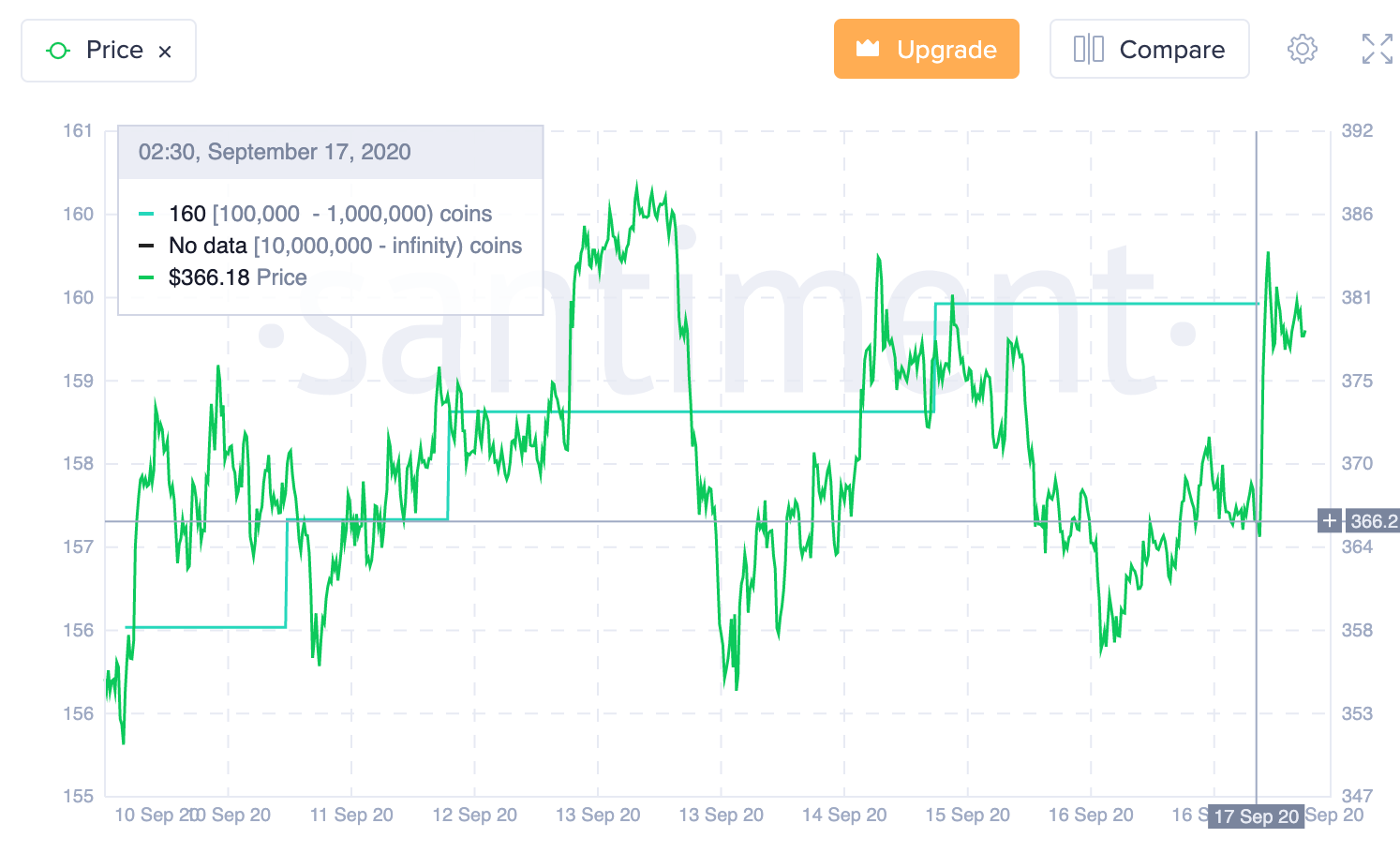 The growing number of new addresses confirms increased buying interest. The metric bottomed at 76.3k on September 14 and increased to 106.8k by September 16. Being a leading indicator for the price movements, it may signal that the upside momentum may gain traction as new network participants will start moving coins to their newly created wallets. However, we will need to make sure that the pick-up is more than a one-time thing as the ETH network is still in a shrinking mode in the long run.

Now let’s have a closer look at the charts to see if the technical picture supports the on-chain metrics’ bullish signals. 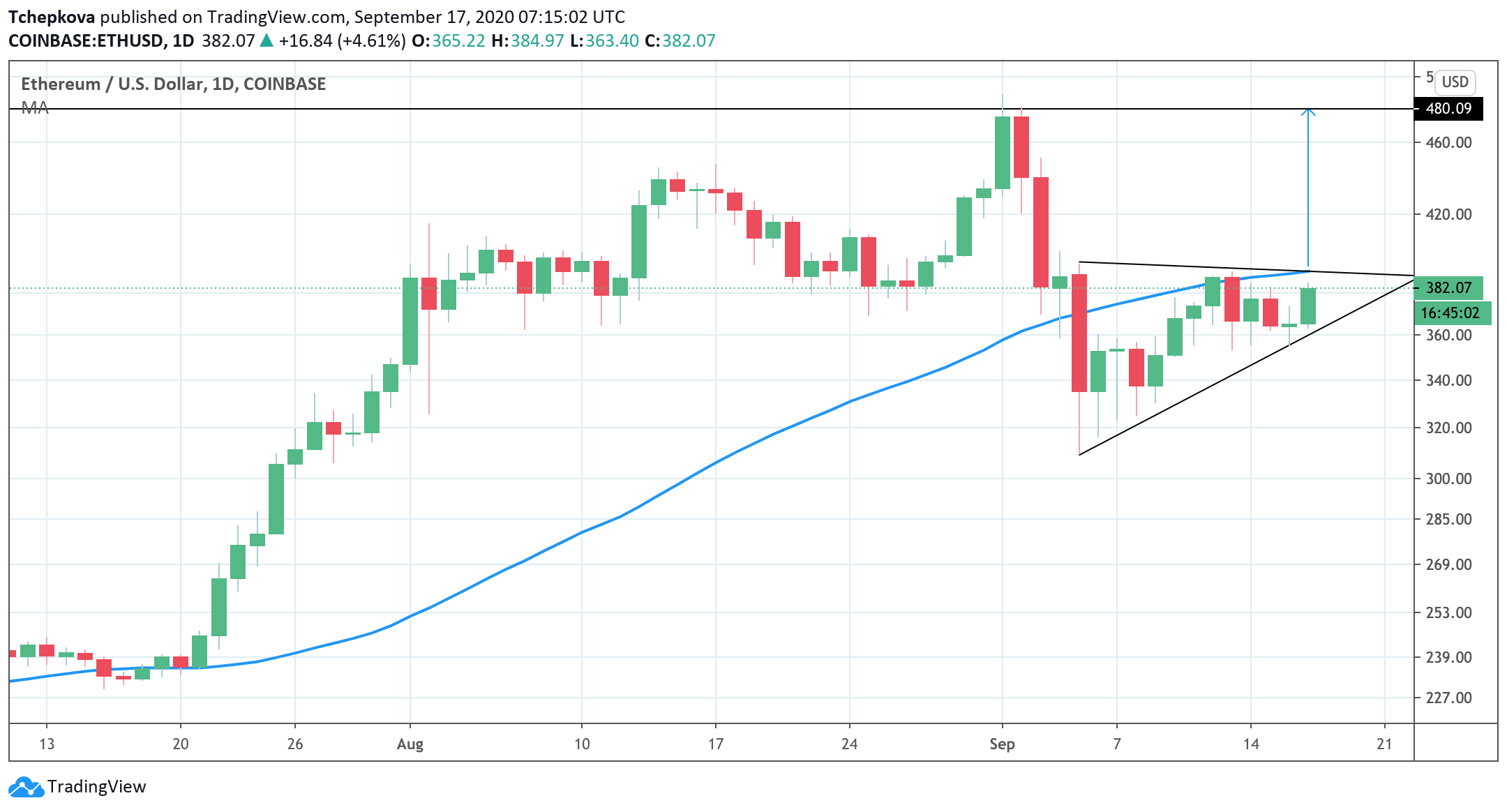 On a daily chart, ETH/USD is moving inside the triangle pattern. The price reversed from its lower line at $360 and recovered to the intraday high of $384.97 on Thursday. The upper boundary of the triangle at $390 serves as a local resistance that separates ETH from an extended recovery towards $460 and 488.95, the highest level of 2020. Notably, this area is reinforced by the daily SMA50, making it a tough nut to crack for the bulls.

ETH positioning data confirm a strong resistance on approach to $400 as nearly 1 million addresses, with 2.49 million coins, have their breakeven point from $382 to $393. However, once this barrier turns into resistance, ETH will regain $425 posthaste as there are no severe roadblocks on the way to the North. Furthermore, ETH has reliable support on approach to $360 (657 addresses with over 11 million coins), which coincides with the lower line of the triangle pattern mentioned above.

Bitcoin’s In and Out of the Money data

Uniswap comes to the rescue

As the FXstreet previously reported, a popular DeFi-protocol Uniswap announced the proprietary token UNI launch and secured its listing on Binance. Apart from that, the liquidity mining for the new token starts in two days, targeting four ETH pools: ETH/USDT, ETH/USDC, ETH/DAI, and ETH/WBTC. This development may lead to an increased interest in Ethereum’s token, as noted by many industry experts, including the famous economist and trader Alex Krüger.

To conclude, on-chain and fundamental data signals that ETH may be ready for a spectacular growth with the initial targets at $460 and $88.95 (the highest level of 2020). However, we will need to see a sustainable move above $380 to confirm the bullish scenario. Otherwise, the price may retest $360 before another recovery attempt.

ECB’s Rehn: There is a risk that inflation will continue to remain too low

ETH on-chain and fundamental metrics imply that the coin is ready for a sharp recovery. The bullish scenario requires confirmation from the technical developments. ETH/USD has been one of the best-performing coins out of the top-10 on Thursday. The second-largest digital asset price has gained nearly 4% since the beginning of the day and 4.5% since this time on Wednesday. At the time of writing, ETH/USD is hovering around $380. The coin is moving within a short-term bullish trend amid high volatility. Ethereum's price hit the bottom at $310 on September 5 and has been recovering slowly ever since. However,…