Latest
You are at:Home»Crypto News»Ethereum price analysis: This support is what Ethereum needs to retrace towards $300

Ethereum has come under heavy selling pressure in the past couple of months. The token is highly correlated with Bitcoin (BTC) but the effect of the negative pressure on Ethereum is greater. Ethereum declines over the weekend traded new 2018 lows, besides, the recovery that is currently ongoing lacks a catalyst and a momentum to battle with hurdles towards the long-term critical resistance at $300.

The network recently revealed the Ethereum 2.0 roadmap. The new protocol was first mentioned in a blog post by Darren Langley, a senior developer at Rocket Pool. The highlight of the Ethereum 2.0 is that integration of the Proof-of0Stake (PoW) and the Sharding technology coupled with eWASM. The release of Ethereum 2.0 will once again elevate the platform to the highest levels of technology and digital infrastructure. In addition to that, it will have the ability to develop cutting-edge economic systems and become a global collaboration hub.

In the meantime, Ethereum has declined below $200 again after the recovery from the year lows lost momentum at $208. ETH/USD is also trading within a contracting triangle pending a breakout. It is important that the buyers push the price above $200in to clear path towards $300. The initial resistance is at the 50SMA while the 100SMA coincides with the 61.8% Fib level to prevent movement towards $200. On the flip side, a break below the triangle support could call for continued breakdown towards $180 and $150. The buyers need a support above $200 for them to focus on higher levels. 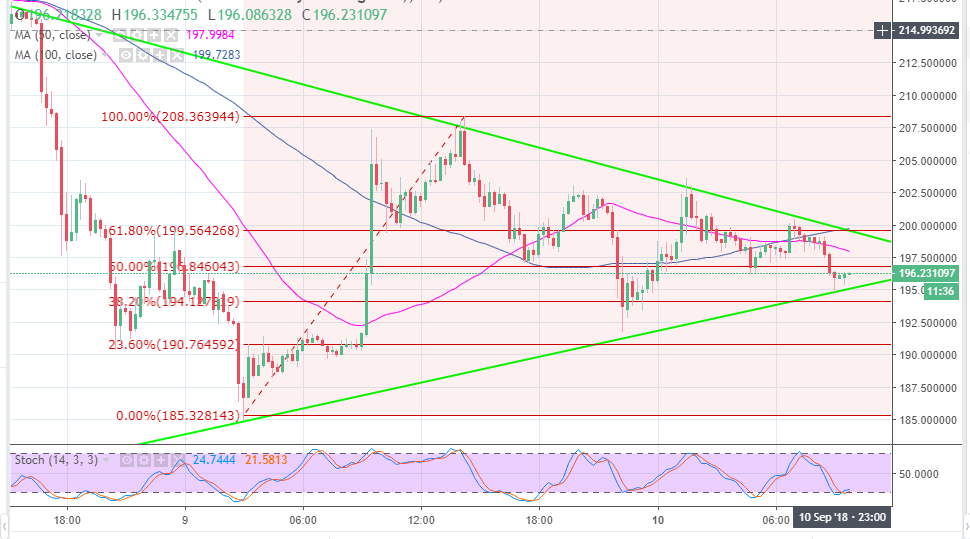 Get the 5 most predictable currency pairs
Previous ArticleGBP/USD seen within a broad range so far – UOB
Next Article EOS price analysis: EOS/USD wiggles around $5.00, moving in sync with other cryptocurrencies