Home » Ethereum Price Prediction: ETH rebound to $360 in the offing

Ethereum Price Prediction: ETH rebound to $360 in the offing

Ethereum has been on an unstoppable breakdown following yet another rejection from levels around $390. While several support zones, including $380, $360 and $340 failed to hold during the downtrend, the smart contracts giant token has embraced support at $310. This is the second time Ether is trading lows of $310 in September. A shallow recovery has already ensued, with the cryptoasset exchanging hands at $324.

As established, Ethereum sustained a downtrend after trading a monthly high of $489, apart from the failed attempts to break above $400. Volatility within the crypto is also set to surge as the biggest expiry for ETH options comes on Friday. The options expiring in September have an open interest of over $460 million as reported. It is the biggest expiry for Ether options in the history of the digital asset. Many analysts and crypto enthusiasts expect the price to roll upwards amid the volatility. 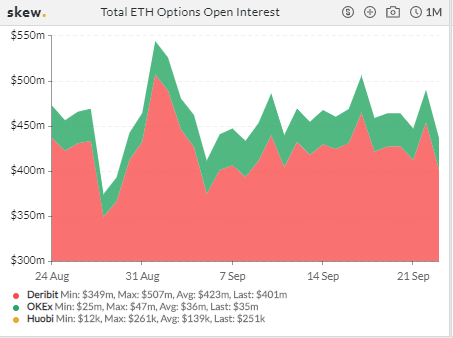 A double bottom-pattern seems to be forming in the 4-hour range. However, its impact can only be determined if it is confirmed. The Relative Strength Index (RSI) struggles to come out of the oversold region, bringing to light the resistance between $324 and $330. If the RSI sustains its motion above the oversold and trends towards the midline, we can expect Ethereum to continue with the momentum while targeting the next hurdle at $340. More resistance is envisaged at $360 and the confluence at $364, created by the 50 Simple Moving Average and the 100SMA.

IntoTheBlock’s IOMAP model suggests the only significant resistance runs from $363 to $374. About 668,000 addresses previously bought 10.42 million ETH in this supply area. Ethereum could relaunch the mission to trade above $400 if this zone is flipped into support.

On the flip side, Ethereum still lacks strong support, hence the need to proceed with caution. The IOMAP highlights $296 – $306 as the most robust demand zone. Here, around 765,000 addresses previously purchased 1.81 million ETH. Trading under this support could open the Pandora box, forcing ETH/USD onto the key levels around $280 and $250.

The bullish case is also supported by an increase in the number of whales holding Ethereum. According to Santiment, a leading provider of on-chain data, wallets holding between 100,000 and 1 million ETH have been on the rise since September 21, from 159 to 163 on September 24. This figure may appear small, but when these coins’ volume is considered, then its effect on the price can be fathomed. Therefore, the increase in buying pressure from the whales is likely to continue supporting the momentum to $360.

Most indicators suggest that Ethereum is on the way to a rebound. However, it worth mentioning that the Moving Average Convergence Divergence (MACD) is still in the negative territory even in the hourly range. In other words, selling pressure is present and cannot be ignored.

Besides, the bullish scenario to $360 would be invalidated if Ethereum does not close above the 50 SMA ($337) in the same 1-hour range. Moreover, if initial support at $320 caves in Ethereum may retest $310 support again. Losses could also extend to $300 and $280, respectively.

Ethereum bulls are working tooth and nail to fully regain control over the price following the dip to $310. On-chain analysis suggests that ETH/USD has a smooth path to $360. Ethereum has been on an unstoppable breakdown following yet another rejection from levels around $390. While several support zones, including $380, $360 and $340 failed to hold during the downtrend, the smart contracts giant token has embraced support at $310. This is the second time Ether is trading lows of $310 in September. A shallow recovery has already ensued, with the cryptoasset exchanging hands at $324. Ethereum options expiry drawing closer…