Cover protocol, an Ethereum DeFi insurance project has halted support and development after core developers pulled out of the project.

The Sunday September 05 announcement that was made by ‘DeFi Ted’ the project’s core contributor indicated that Cover protocol which is a DeFi insurance Coin minted on Ethereum would no longer receive support and development after the sudden abandonment by the core team. Ted called on COVER holders to “withdraw any funds from both protocols asap, as we can no longer maintain the UI.” He also said:

“The decision to do this did not come easy and is a final decision the remaining team made after reviewing the path forward, after the core developers suddenly left the projects. After discussing with the remaining team and finalizing plans moving forward it made sense that the remaining treasury funds be evenly dispersed to token holders.”

DeFi Ted said that he was disappointed that core development team was leaving “especially given the time we had spent together building out the protocols and following the vision they had.”

Ironically, the development team had a vision of covering investors from losses emanating from projects that end in tragically, and COVER just did. The Cover Protocol allowed users to stake COVER coin to put it up as collateral, and receive smart contract tokens that would execute claims to insure the holder against losses from hacks, exploits, and rug pulls in Ethereum DeFi projects gone awry.

COVER had a market cap of around $21 million at the time the announcement was made. Within hours, the COVER price fell over 16%. The 24-hour trading volumes rose from below $4 million to nearly $20 million as COVER holders scrambled to exit.

This also affected the Ethereum price, which after rising to areas above $4,000 on Friday, struggled over the weekend and has continued the downtrend as the traders reacted to the news.

Ethereum Price To Re-Test The All-Time High Above $4300

The Ethereum price prediction is bullish as technical indicators on the daily chart. A look at the ETH price action a while back shows that the smart contracts giant’s token had a good start to the weekend, with its price recovering from Thursday’s low at $3,702 to rise by over 8% to set a four-month high at $4,022 on Friday. However, Ethereum bulls could not sustain the momentum and saw the price fall back on Saturday, dropping 1.79% to close the day around$3,778. The price recovered on Sunday, but started the week bearish on Monday. Currently, Ethereum is having its second straight bearish session with the price still struggling to get past $4,000 and trading around $3,219 on most crypto trading platforms.

ETH/USD price bulls need to defend the immediate support around the $3,700 level. A daily closure above this level will bolster bulls to push the price towards the $4,000. A decisive break out above the $4,000 level will validate a bullish breakout towards the ATH above $4,300 representing a 16% rise from the current price.

This bullish narrative is validated by the position of the Moving Average Convergence Divergence (MACD) in the positive region way above the zero line. Also the movement of the MACD line above the signal line is an indication that Ethereum remain bullish in the short-term.

Also note that the upsloping moving averages and the positive Parabolic SAR as it moves below the price adds credence to this bullish narrative. Note that as long as the Parabolic SAR continues to move below the price, the Ethereum will remain bullish. The current correction could be temporary as Ethereum could bounce off the $3,700 support wall and re-start the run upwards.

Note that if the Ethereum price favours the bulls and the support at $3,700 gives in, Solana may drop towards the $3,500 psychological level. Any further drop downwards would see ETH/USD slide towards the $3,200 major support wall or the 50-day Simple Moving Average (SMA) at $3,000.

Where to Buy ETH

If you want to trade Ethereum, you can do so on crypto exchanges such as eToro. This is an FCA regulated platform with over 20 million user globally. eToro charges low trading fees and commissions.

Looking to buy or trade Ethereum now? Invest at eToro! 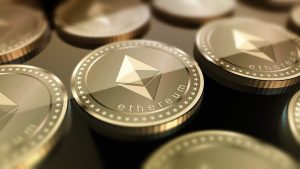 Ethereum price has rallied 17% over the last seven days to reach a three-month high above $4,000. ETH price prediction is bullish but the $3,700 support is crucial to validating this bullish bias. The current correction might be minor before bulls regroup themselves before pushing the price higher. Ethereum price has risen by approximately 17% from around $3,219 on August 31 to the current price at $3,813. This rally saw ETH price rise a four-month high on Friday September 03 around $4,022. Its market value has crossed the $400 billion mark to $ $447,419,415,219 at the time of writing increasing…