The EUR/GBP cross struggled to capitalize on its intraday positive move, instead met with some fresh supply near a resistance marked by over one-week-old descending trend-line. The cross has now dropped back to an important horizontal support near the key 0.9000 psychological mark.

The mentioned horizontal support and the trend-line resistance constitutes the formation of a descending triangle on short-term charts. A convincing breakthrough the triangle support will be seen as a fresh trigger for bearish traders and pave the way for further near-term weakness.

Meanwhile, technical indicators on the daily chart remained in the bearish territory and have again started gaining negative momentum on hourly charts. The set-up favours bearish traders and supports prospects for an eventual breakdown through the descending triangle.

The next relevant target on the downside is pegged near the 0.8970-65 horizontal zone ahead of the 0.8925-20 region and the 0.8900 round-figure mark. The bearish trajectory could further get extended towards the next major support near 0.8875-65 region.

On the flip side, any meaningful recovery attempt might continue to confront some fresh supply and remain capped near the trend-line resistance, around the 0.9055-60 region. That said, a sustained move beyond will negate the bearish outlook and prompt some short-term move.

The EUR/GBP cross might then accelerate the recovery move back to the 0.9100 level. Some follow-through buying has the potential to lift the cross further towards the 0.9155-60 intermediate resistance before bulls eventually aim to reclaim the 0.9200 mark. 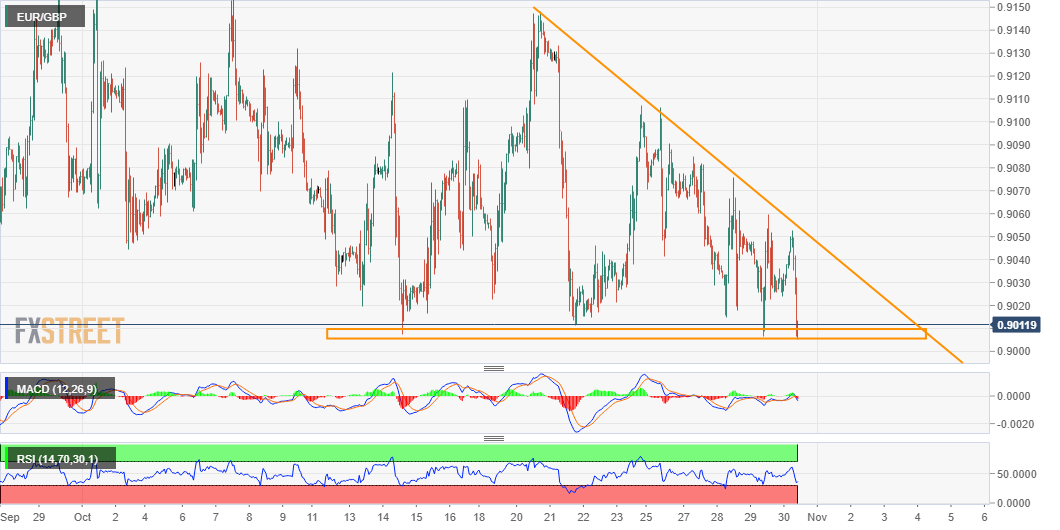