The EUR/GBP cross faced rejection near the 0.8700 round-figure mark and witnessed a dramatic intraday turnaround on Thursday. The subsequent selling dragged the cross to fresh multi-month lows, around the 0.8670 region during the first half of the European session and was sponsored by a sudden pickup in demand for the British pound.

From a technical perspective, the EUR/GBP cross has been trending lower over the past two months or so along a downward sloping channel. The set-up points to a well-established short-term downtrend and supports prospects for further losses. That said, slightly oversold conditions on short-term charts warrant some caution for bearish traders.

Hence, it will be prudent to wait for some near-term consolidation before positioning for any further near-term depreciating move. Nevertheless, the EUR/GBP cross remains vulnerable to prolong the ongoing downward trajectory. Hence, some follow-through weakness towards the trend-channel support, around the 0.8645 region, looks a distinct possibility.

On the flip side, the intraday swing highs, around the 0.8700 round-figure mark now seems to act as an immediate strong barrier. Any subsequent move might be seen as a selling opportunity near the 0.8740-45 region, which coincides with the top boundary of the mentioned trend-channel and keep a lid on any further gains for the EUR/GBP cross.

Only a sustained strength beyond the said resistance will negate the near-term bearish bias and prompt some aggressive short-covering move. The momentum should then assist the EUR/GBP cross to aim back to reclaim the 0.8800 round-figure mark. 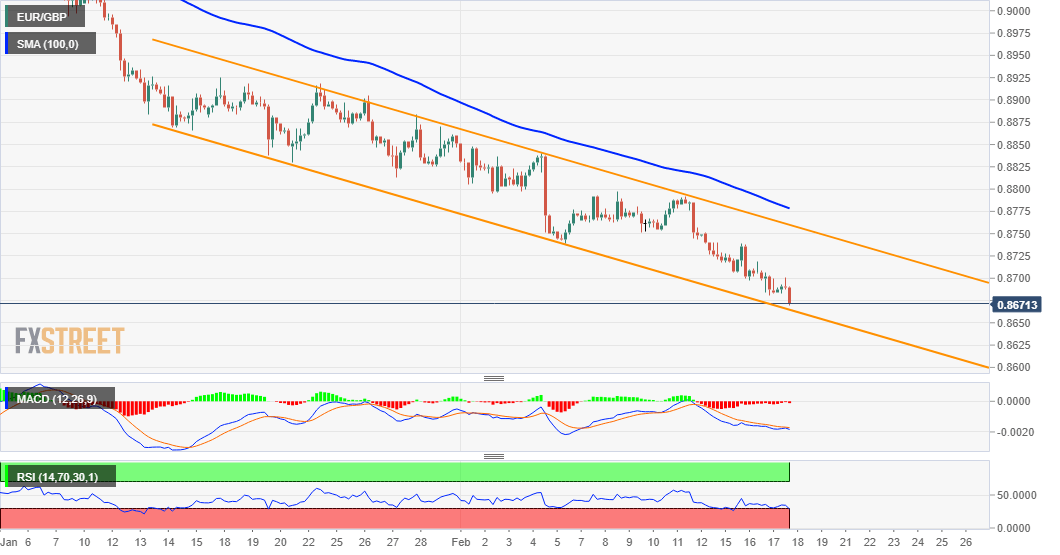 Get the 5 most predictable currency pairs
Previous ArticleGBP/USD: Cable comeback? Dollar storm has its limits, especially against sterling
Next Article WTI corrects from 13-week tops, holds above $61 amid Texas deep freeze