EUR/USD is holding onto its gains around 1.1550. The pair finally broke out of range on Wednesday, driven by the dovish Fed statements.

Atlanta Fed President Raphael Bostic opened the door to rate cuts, a first for an FOMC member. He said that interest rates could go in “either direction” and triggered the initial rally. Saint Louis Fed President James Bullard, one of the most dovish members, warned the Fed could push the economy into recession if it hikes rates again. Boston Fed President Eric Rosengren expressed optimism but stressed that he may be wrong and that the Fed needs to listen to markets.

The FOMC Meeting Minutes from the December meeting topped it off. While they officially document an event from three weeks ago, the minutes did reflect the new dovish thinking from the world’s most powerful central bank. The echoed Chair Jerome Powell’s recent words about a need for “patience” and gave another boost to the greenback.

Powell will have his say, later on, speaking in Washington during the US session. Bullard, Evans and Vice Chair Richard Clarida will also have their say and will likely repeat the message.

In other US news, another meeting between President Donald Trump and Congressional Democrats Nancy Pelosi and Chuck Schumer ended without an agreement. The government remains shut down, and it may have an impact on the economy if it continues.

Talks between the US and China have concluded with both sides reporting progress, although the road remains long to a trade deal. Reports that Trump wants a deal have supported markets.

On the other hand, weak Chinese inflation reported overnights dampens the sentiment. The sharp slowdown in the Producer Price Index (PPI) from 2.7% to 0.9% raises concerns that the downturn is more severe than earlier thought.

In Europe, French industrial output fell by 1.3% in November, far worse than expected. The weak data from the continent’s second-largest economy joins the parallel report from the largest. The plunge of 1.9% in German production still echoes in markets.

The European Central Bank publishes its meeting minutes from the December meeting. Back then, President Mario Draghi balanced between optimism on ongoing growth and caution amid signs of a slowdown. The ECB Momentary Policy Meeting Accounts usually repeat the same messages, but any more profound concerns may weigh on the common currency. 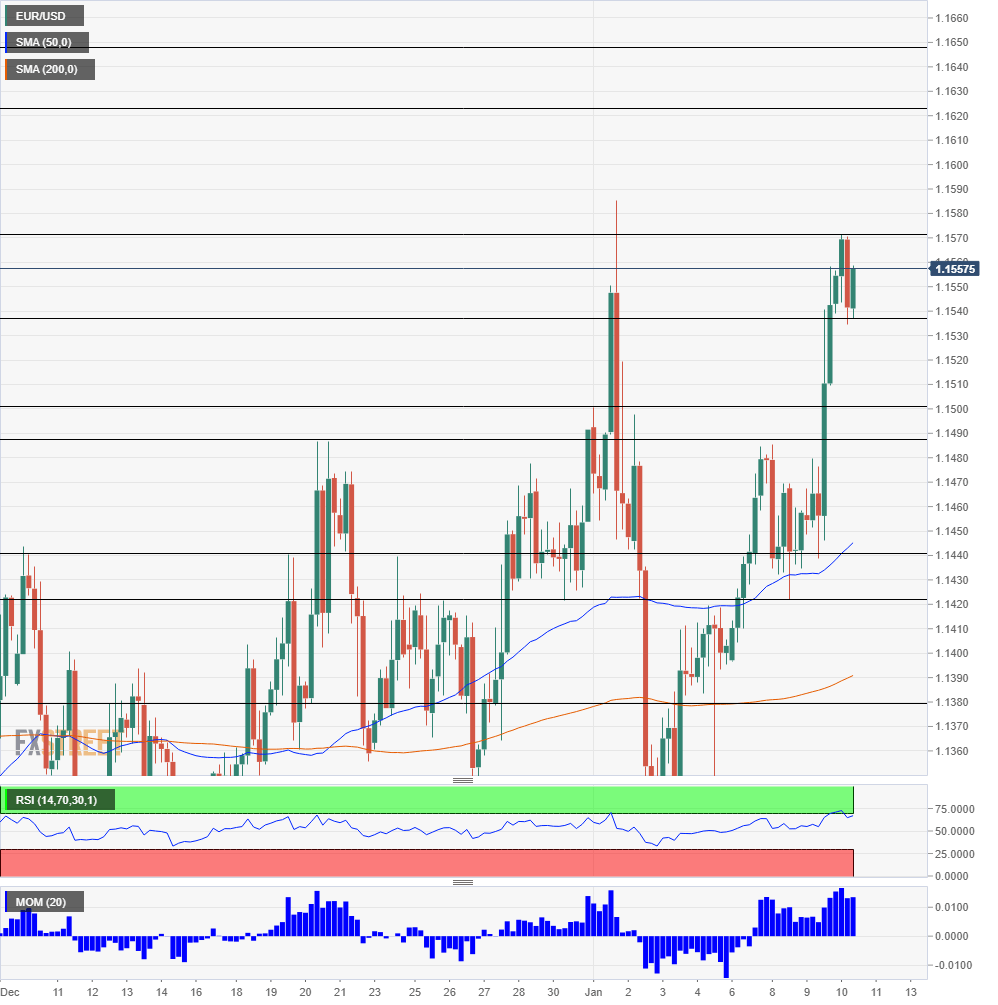 The Relative Strength Index (RSI) on the four-hour chart had already entered overbought territory but exited it swiftly. The current level, below 70, indicates further gains are possible. Momentum remains upbeat, and the critical Simple Moving Averages are far below.

1.1535 was the low point after the rally and serves as immediate support. 1.1500 was the high point in November and switches to support. 1.1485 was a recent peak before the surge and 1.1440 worked in both directions.

More: EUR/USD levels to watch after the Bostic Breakout

Get the 5 most predictable currency pairs
Previous ArticleFOMC: Caution in mind – Rabobank
Next Article WTI drops over 1.5% to $ 51.50 amid swelling US supply