A deal can wait until after November 2020 – that is precisely the opposite of what financial markets wanted to hear from US President Donald Trump. The safe-haven US dollar has been able to recover previous falls, holding EUR/USD below 1.11.

Investors had already been pricing in an imminent accord between the US and China. If not, an agreement to remove previous tariffs – at least an interim one to prevent further escalation. However, Trump’s comments that are holding back on any deal until after the November 2020 presidential elections – and reports that the December 15 duties remain intact weighed on markets.

Moreover, the US House of Representatives passed a bill that sanctions Chinese officials involved in severe human rights violations in Xinjiang. The bipartisan legislation, which was passed almost unanimously, has angered China. Hu Xijin, editor of the Global Times – considered a mouthpiece of the regime – has called it a “paper tiger.”

However, Beijing promised retaliation and added ominously that the Xinjiang bill will affect cooperation in “important areas.”

The world’s largest economies recently had a similar clash around Hong Kong. So far, both issues seem to be separate from the trade – but negotiations have been unfruitful. Trump previously said that talks are in their “final throes,” and White House adviser Kellyanne Conway said the deal is “being written.”

The latest developments are discouraging, weighing on stocks and boosting the dollar.

Before Tuesday’s developments, the greenback was on the back foot. ISM’s Manufacturing Purchasing Managers’ Index (PMI( disappointed with a drop to 48.1 points in November – reflecting a deeper contraction in the sector. ISM publishes its Non-Manufacturing PMI on Wednesday, which is expected to exceed the 50-point threshold, thus reflecting expansion.

Both forward-looking indicators also serve as hints toward Friday’s Non-Farm Payrolls. Another more direct clue toward the jobs report is ADP’s employment change figure for the private sector. America’s largest payroll provider is set to report acceleration in job creation.

See ADP Employment Preview: For better or worse, all roads lead to China.

In the old continent, Markit’s final services PMIs for November are forecast to confirm moderate expansion. Similar to the US, the industry is under pressure, while consumers are propping up the economy.

Overall, further trade developments and US data are set to determine the next euro/dollar moves. 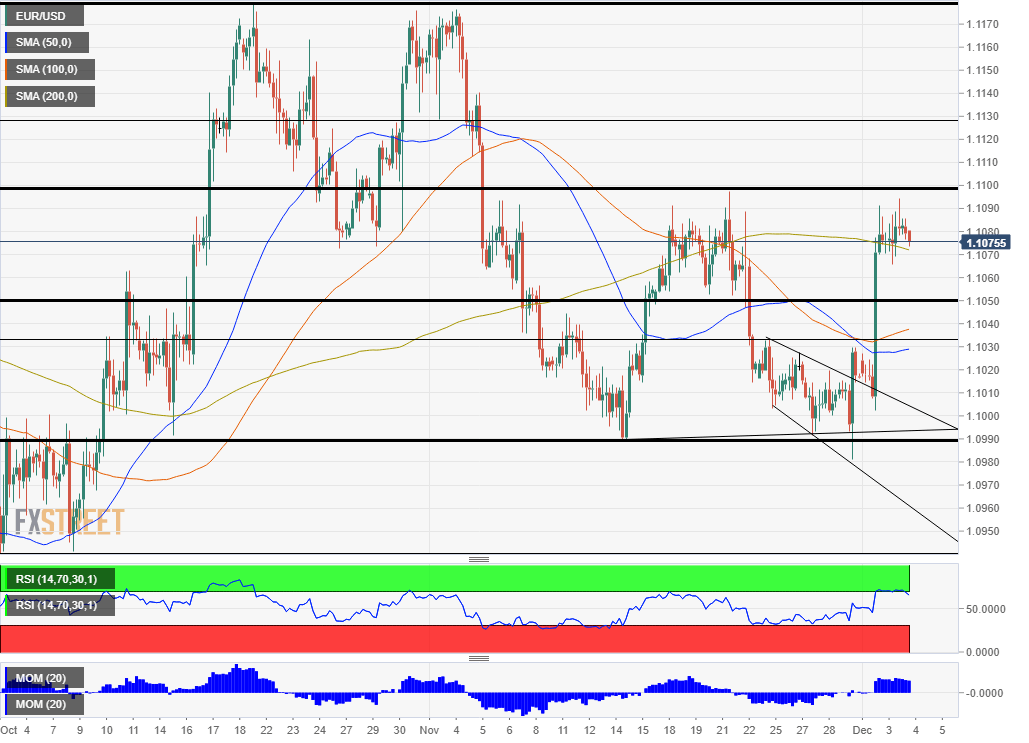 The world’s most-popular currency has nearly hit 1.11 – a peak from late November – thus creating a double-top. This round level is looming above. EUR/USD seems well-positioned to break higher. It has surpassed the 200 Simple Moving Average, and the Relative Strength Index has dropped below 70 – thus exiting overbought conditions.

Bulls are leading over the bears.

Above 1.11, the next level to watch is 1.1130, which has provided support early in November. It is followed by 1.1180 – another double-top, holding the currency pair down in October and November.

Looking down, support awaits at 1.1050, which held EUR/USD up in late November. Next, 1.1035 capped it before the recent surge. November’s low at 1.0980 is another significant level.

Get the 5 most predictable currency pairs
Previous ArticleRipple price prediction XRP/USD desperately needs to recover above $0.22 – Confluence Detector
Next Article ECB to soon announce the start of the strategic review – ING