Latest
You are at:Home»Forex News»EUR/USD edging towards new 2019 lows on ongoing trade wars

It is two steps backward, one step forward for EUR/USD that settles on lower ground in moves that somewhat resemble the ongoing commercial dispute between the US and China.

The world’s largest economies have not scheduled new high-level trade talks between them. Some analysts see the spat dragging the world into a recession in 2020. The current battleground remains Huawei, the Chinese telecommunications giant that has been blacklisted by the Trump administration. Google, one of America’s most-prominent tech firms, announced it would not support Huawei in upgrades to Google’s Android operating system.

Huawei is set on developing its own OS in what is already dubbed as a “tech cold war.” The one step forward is that the White House approved a temporary, 90-day general license for the Chinese firm and 68 additional entities. Huawei is suspected of having links to the Chinese army.

The absence of a more significant improvement weighs on markets, especially tech stocks, and boosts the safe-haven US dollar. Fed Chair Jerome Powell said it is too early to assess the impact of the current spat while markets see growing chances of a rate cut.

At the same time, the euro has issues of its own. Germany’s central bank, the Bundesbank, noted that the largest economy in the old continent is still not out of the woods despite returning to growth in the first quarter of the year.

Elections for the European Parliament begin on Thursday, and eurosceptic parties may enjoy considerable gains, shaping future policy and even impacting the presidency of the European Central Bank. In France, the second-largest country, President Emmanuel Macron’s centrist party is neck and neck in the polls with Marine Le Pen’s National Rally. Macron needs to win to have a mandate for promoting further European integration.

Looking forward, euro-zone consumer confidence and US existing home sales are of interest, but the trade war will likely driver markets more than anything else. 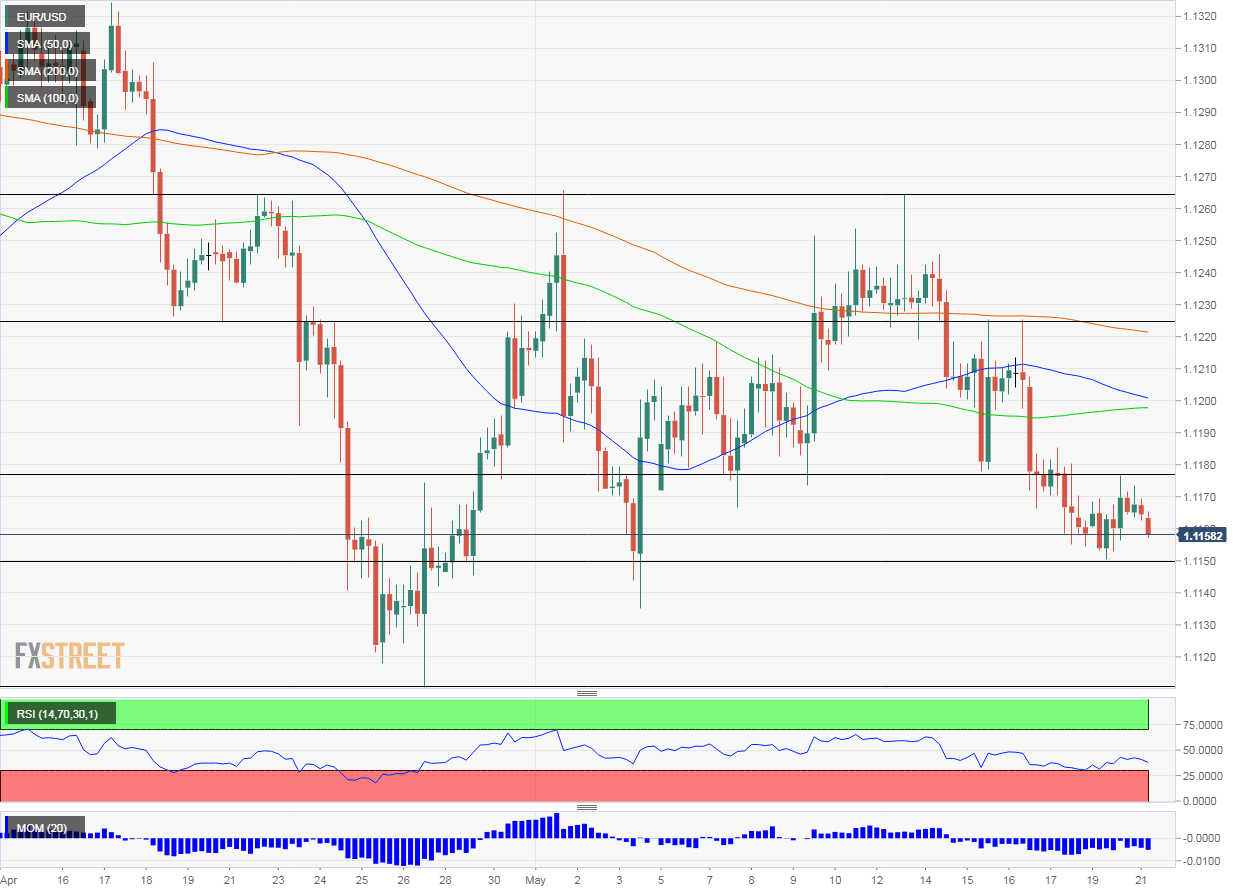 EUR/USD continues suffering from downward momentum on the four-hour chart, and also trades below the 50, 100, and 200 Simple Moving Averages. Moreover, the Relative Strength Index is above 30, not indicating oversold conditions. Overall, the outlook is bearish.

Looking up, 1.1175 was the high point on Monday. The next significant cap is at 1.1225, which held down the pair twice last week. The next level is 1.1265, that served as resistance three times in May.