EUR/USD is consolidating on a busy events week ahead throughout the world, including the European Central Bank interest rate decision.

The US dollar has been the focus for a number of sessions and today, the DXY reached a one-month high as risk aversion swept the floor of the bears.

However, the move was capped and further downside could be on the cards according to technical analysis and a 38.2% Fibonacci expectation:

Joe Biden will be inaugurated as the next US president on Wednesday and the implications for the US dollar have evidently been baked into positioning.

In fact, the aggregate dollar net positioning has fallen from -16% to -19% of open interest.

This is edging below the multi-year lows of -18% seen last September.

A significant unwind of such an oversold market will likely see the greenback correct further in the spot market.

Moreover, Biden’s plan for a $1.9 trillion stimulus package has fuelled a rise in US Treasury yields which would arguably reverse the value of the dollar higher.

This will also be closely watched by emerging markets and especially China. The nation’s economic rebound has fuelled a bid in riskier asset classes, sending the dollar lower over the past few months.

Currency wars will be a theme back on to the market’s agenda and Janet Yellen’s confirmation hearing as US Treasury Secretary will be a focus.

She may well be asked what she thinks about the US dollar. Expectations are that she will lean on the cautious side and not say too much, but overall favour a strong dollar policy.

Meanwhile, European policymakers will take centre stage this week where we will also see meetings of both the ECB and EU leaders.

While little is expected of the ECB after December’s easing measures, markets will nonetheless be tuned in to what President Lagarde has to say about the exchange rate in relation to an already subdued inflation rate.

On Wednesday, markets will be keen to see what comes of the EU summit.

The coronavirus spread is concerning and co-ordination of the vaccination roll-out will be paramount for the risk-on sentiment.

The implementation of the EU Recovery Fund has been a key topic baked into the euro as nations unite in their plight to fight off the disease.

In other politics, the CDU leadership contest in Germany and ongoing Italian political uncertainty remain risks on the back burner.

Lastly, there is an underbelly of support for the euro from a structural basis whereby the European Commission is seeking means on improving the international role of the euro and replacing the petrodollar.

This fundamental backdrop, while distant to spot-fx for the meantime, will likely have strong support from those countries trying to find ways to extricate themselves from dollar dominance.

As anticipated in this week’s ”The Chart of the Week”,  the euro is correcting:

Source: The Chart of the Week: EUR/USD enters the bear’s lair

As can be seen, the euro is indeed correcting the strength in the greenback. 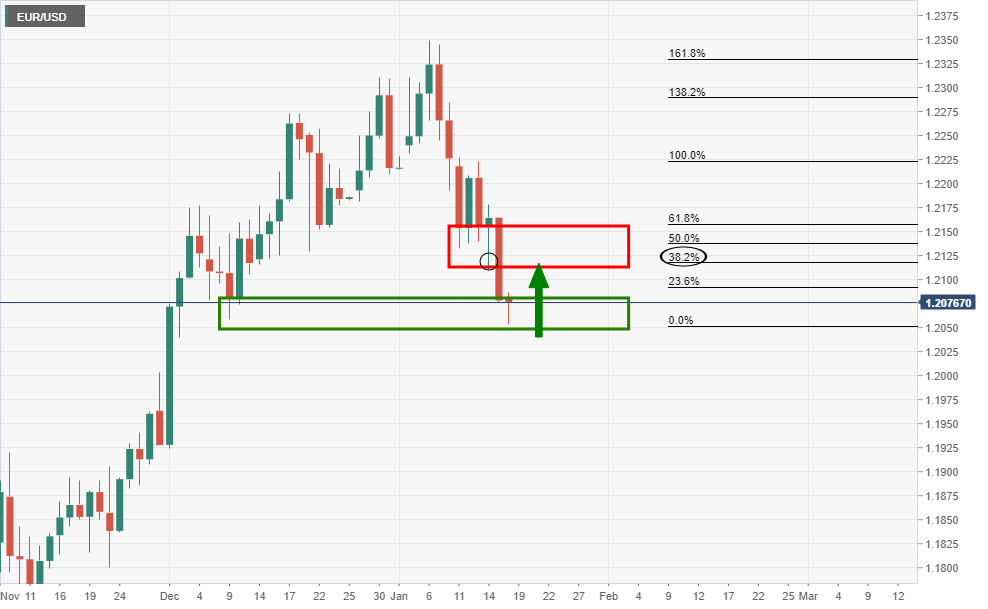 Evidently, there is room for the US dollar to give back significant ground within its monthly correction, but the overall picture remains bullish towards at least a 38.2% Fibonacci retracement which would cap advances in the euro. 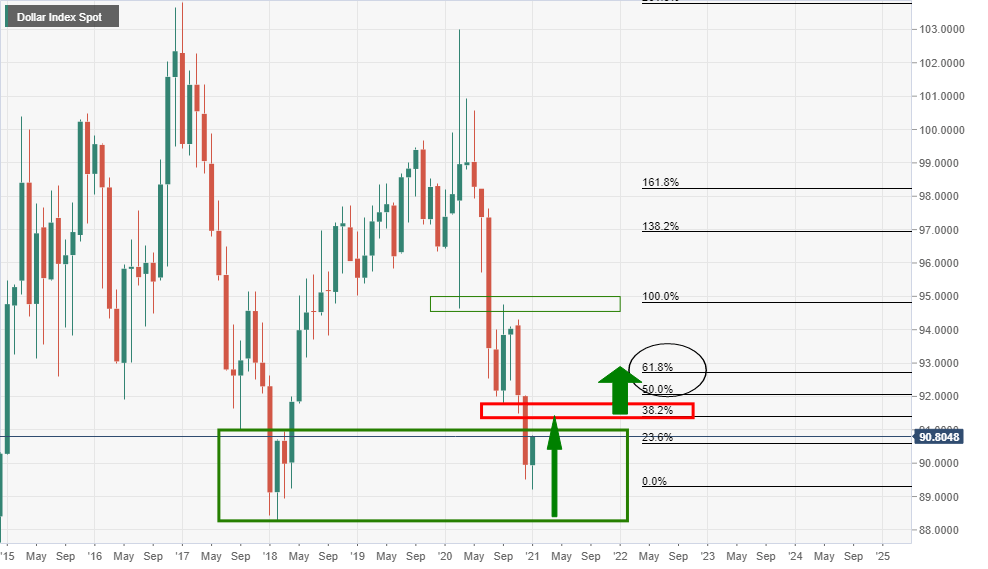 EUR/USD bulls stepping back to the table s US dollar corrects.  Busy week ahead for European and US politics, including the ECB. EUR/USD is consolidating on a busy events week ahead throughout the world, including the European Central Bank interest rate decision.  At the time of writing, EUR/USD is trading at 1.2074 having travelled between a range of 1.2053 and 1.2086 so far on the day.  The US dollar has been the focus for a number of sessions and today, the DXY reached a one-month high as risk aversion swept the floor of the bears. However, the move was capped…