Latest
You are at:Home»Forex News»EUR/USD enjoys the Fed’s dovishness to rise in the channel

EUR/USD kicks off the last day of the first full week of January on a positive note. The pair trades above 1.1500, emerging from a correction after the recent gains. The Fed is behind most of the fresh upward move.

Fed Chair Jerome Powell spoke on Thursday in Washington and said that there is no specified amount of rate hikes. He reiterated the message of patience. He echoed his own words from one week ago, supporting stocks and weighing on the USD.

Vice Chair Richard Clarida said that the economy can tolerate inflation above 2%, thus echoing the message of patience. Saint Louis Fed President James Bullard, arguably the most dovish member of the Fed, went as far as criticizing the decision to raise rates in December. He is a voter this year.

Markets are also optimistic about the prospects of a trade deal with China, prospects boosted by a tweet from President Donald Trump.

Trump remains adamant about funding for a border wall with Mexico and is getting closer to declaring a national emergency on the topic. His desire for wall-funding keeps the government shutdown. Markets have not reacted so far, but 800,000 government workers are set to miss their paychecks today, a move that could already impact the economy.

In the old continent, concerns are growing about the slowdown after France also reported a plunge in its industrial output. The European Central Bank is set to downgrade its growth forecasts, acknowledging reality.

Later today, the US releases the inflation report for December with both headline and core inflation expected to stay at 2.2% YoY.

All in all, the optimistic mood prevails and supports EUR/USD. But is this enough to push the pair to the next level? 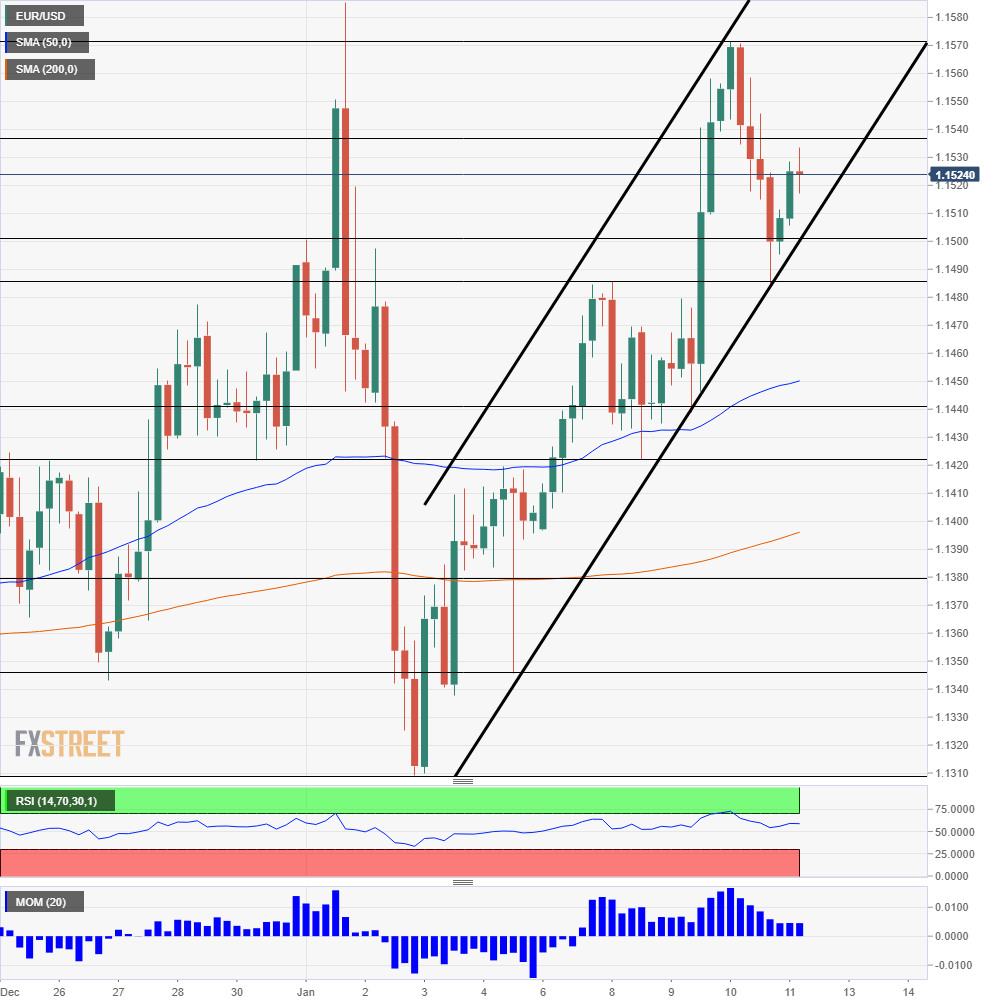 EUR/USD is trading in an uptrend channel as shown by the thick black lines on the chart. It managed to hold onto the line in its most recent fall and resumed its rises.

Momentum remains to the upside and the pair also trades above the 50 and 200 Simple Moving Averages on the daily chart.

The round number of 1.1500 provided immediate support. It was the peak in November. 1.1485 capped it last week and also during December. 1.1440 provided support before the breakout. 1.1420 was a swing low last early in the week.

More: EUR/USD failure to rally may be telling, easier to fall than rising – Confluence Detector