Latest
You are at:Home»Forex News»EUR/USD falls on German data ahead of the NFP

Tight trading ranges are typical ahead of the all-important US Non-Farm Payrolls – but EUR/USD traders were unable to hold their fire amid profound German weakness. Factory orders in the euro zone’s locomotive dropped by 2.2% month on month in May, and plunged by 8.6% on a yearly basis.

The figures increase the chances of significant monetary stimulus from the European Central Bank. Olli Rehn, a member of the ECB, has said on Thursday that “now is the time to act” – contradicting reports that suggested the bank will wait until September.

Euro-zone bonds have been falling in anticipation of rate cuts and perhaps a new bond-buying by the Frankfurt-based institution. Moreover, the nomination of Christine Lagarde, Managing Director of the International Monetary Fund, to lead the ECB from November has also enhanced speculation of more accommodative monetary policy. Lagarde has been supporting current ECB President Mario Draghi’s efforts.

Before the German data came out, EUR/USD traded in a tight range. American traders enjoyed the Independence Day holiday on Thursday and enjoyed fireworks – leaving markets fast asleep. And now it is time to wake up – US Non-Farm Payrolls are set to shake markets.

Official surveys conducted ahead of the jobs report suggest an increase of 160K positions in June. However, leading indicators have been pointing to the downside. Both the ADP Non-Farm Payrolls and the ISM Non-Manufacturing PMI fell below expectations. Bloomberg’s “whisper number” – based on a crowd-sourced survey – points to an increase of only 120K. Average hourly earnings are set to rise by 0.3% month on month and 3.2% on a yearly basis, a tad better than in May.

The Federal Reserve is watching the publication closely ahead of its rate decision next month. The world’s most powerful central bank is set to cut interest rates for the first time since the financial crisis. However, it is unclear if the Fed will only reduce rates once or embark on an easing cycle that may end with four cuts.

EUR/USD is vulnerable ahead of the publication due to the recent downbeat figures. 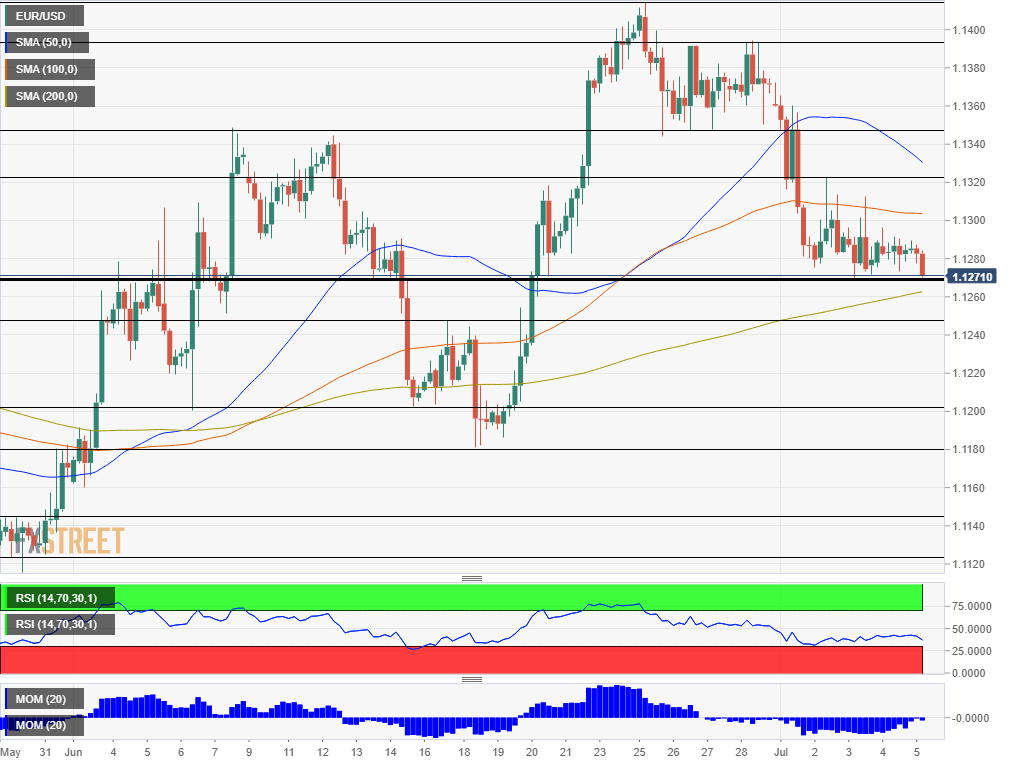 EUR/USD is facing critical support at 1.1270, the line that has been keeping it float in the past few days. In addition, it almost perfectly coincides with the 200 Simple Moving Average on the four-hour chart. The Relative Strength Index is also pointing to the downside.