Latest
You are at:Home»Forex News»EUR/USD fearful of a Draghi drag

EUR/USD is trading around 1.1400, around the levels it saw late on Friday. The US Dollar sold off at the end of a turbulent week. There were three principal downward drivers for the dollar, with the most prominent one being a report about a dovish twist by the Fed.

The Wall Street Journal reported that the world’s most powerful central bank was mulling an early end to its balance sheet reduction scheme. With potentially more dollars to run around, the greenback lost some ground. The Fed decision is the central event of a busy week. In the previous meeting, Fed Chair Jerome Powell said that the program would continue on “autopilot,” but the tables have turned since then.

Another downer of the dollar was the government shutdown. The 35-day long debacle came to an end late on Friday, albeit a temporary one. President Donald Trump announced a three-week reopening of the government without getting any funding for his desired border wall. The move provides some relief to the economy but data points that were initially scheduled for this week, such as GDP, will probably not be placed back on the calendar.

Back in the old continent, the common currency saw quite a bit of volatility from the European Central Bank’s decision on Thursday. President Mario Draghi conveyed a balanced message. He repeated his stance that risks are moving to the downside, citing protectionism, the Chinese slowdown, and also industry-specific issues, mostly the German car industry’s struggles. However, he also said that the labor market is becoming tighter and that wages are on the rise.

All in all, any decision to change its guidance will come only in March, when the Frankfurt-based institution publishes new forecasts. His balanced message eventually sent EUR/USD higher.

Draghi will appear in front of the European Parliament later today and will likely repeat the same messages. Any new insights or any hints about the timing of a rate hike will be closely watched by markets.

With growing evidence of slower growth, Draghi may be slightly more dovish, especially if he is pressed by lawmakers.

Another thing to watch out for is trade negotiations between China and the US. China’s Prime Minister Liu He will hold official talks with US Trade Representative Robert Lighthizer later this week. Preparatory discussions are held in the background. Optimistic headlines may push EUR/USD higher while adverse ones may send it lower on a risk-averse mood. 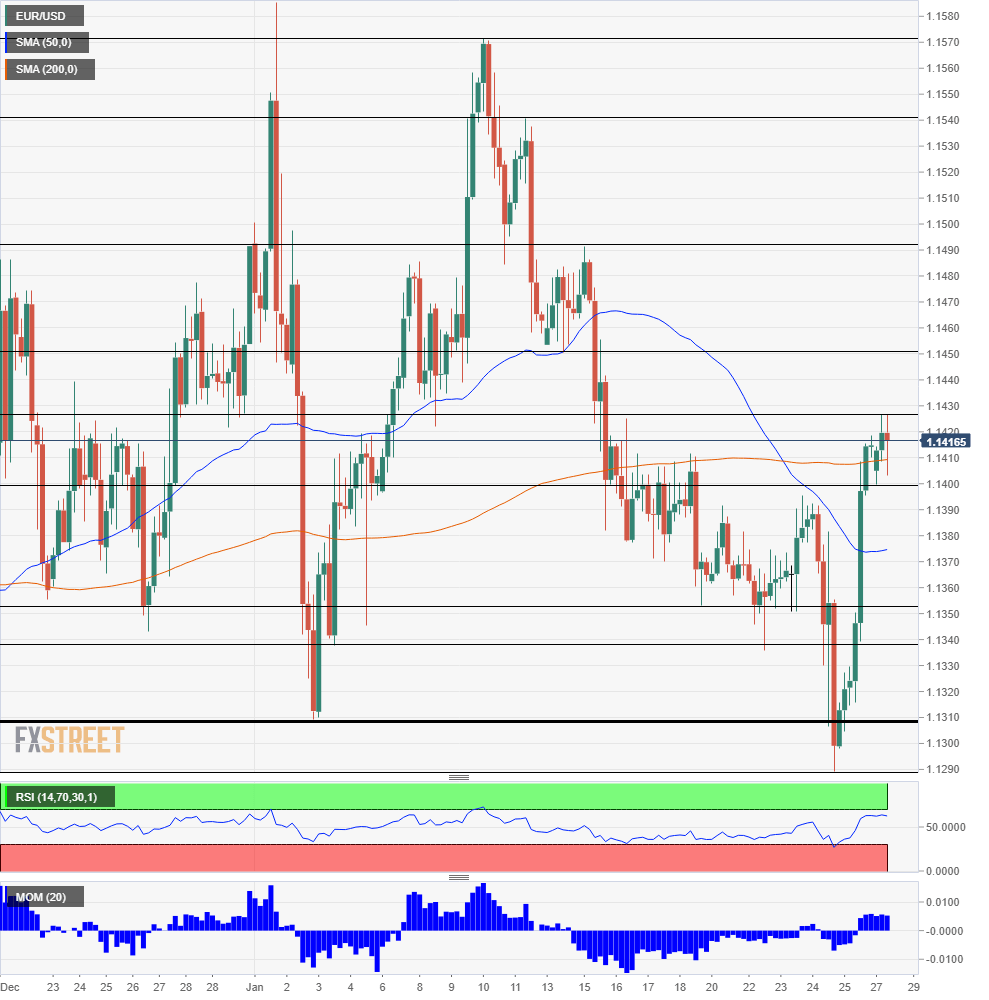 EUR/USD bulls have the upper hand. The pair is trading above the 50 Simple Moving Averages on the four-hour chart and just around the 200 one. Also, Momentum is positive, and the Relative Strength Index does not point to overbought conditions.

More: EUR/USD path of least resistance is up ahead of Draghi – Confluence Detector