Latest
You are at:Home»Forex News»EUR/USD has five reasons to fall

EUR/USD does not like to move that much but now it has not had another option. A perfect storm has sent the world’s most-powerful currency pair to 1.1333, the lowest in four weeks.

The factors pulling the currency down are

1) Trade war not going away

The US and China are not getting closer to each other. China’s president Xi Jinping promised a “long march” in the trade war, conveying a message of resilience and patience. His visit to a rare earth company earlier this week is seen as a thinly veiled threat to limit exports of these materials, used in mobile phones and other industries. China sits on most of the world’s reserves of these elements.

The US is not budging either. Treasury Secretary Steven Mnuchin, usually the optimist in the administration, did not lay out a potential date for further trade talks and said the US could move forward with further tariffs.

And perhaps most importantly for markets, several commercial banks such as Goldman Sachs and JP Morgan are now foreseeing a prolonged trade dispute that could impact growth. Like Mnuchin, they have dropped their optimism.

The Federal Reserve’s meeting minutes repeated the central bank’s patient approach to interest rates. Their document did not contain hints that the Fedis willing to cut rates, contrary to what bond markets are reflecting.

The Fed’s stance boosted the USD.

Preliminary purchasing managers’ indices for May have shown no substantial improvement. The most significant figure, Germany’s manufacturing PMI, ticked down from 44.4 to 44.3 points, representing ongoing contraction in what is considered the continent’s powerhouse.

A separate survey by IFO, Germany’s No. 1 Think-Tank, was also disappointing. Its business climate component dropped from 99.2 to 97.2, worse than expected.

With Europe’s locomotive slowing down, the common currency has room to fall.

Elections to the European Parliament begin today and the results will be published on Sunday. While its legislative powers are limited, the vote serves as an opportunity for Europeans to express their opinion. And many of them are not content.

The latest polls have shown that populist parties are set for gains across the old continent, weakening the position of mainstream leaders such as German Chancellor Angela Merkel and French President Emmanuel Macron.

5) UK politics drag the euro down too

UK PM Theresa May has managed to survive another attempt to oust her but lost a key minister, Andrea Leadsom. More ministers are set to step down and show May the door. Fresh discontent has erupted over her new deal for Brexit, which included the options of a second referendum and a customs union.

A hardline leader such as Boris Johnson is on course to replace her. The pound has been on a free-fall and the euro is also being dragged down as a hard Brexit also has adverse implications on several euro-zone economies.

All in all, everything is going against EUR/USD. Will we see new lows for the year? The European Central Bank’s meeting minutes are due later and will likely repeat the message that risks are moving to the downside. However, political developments are more likely to rock markets. 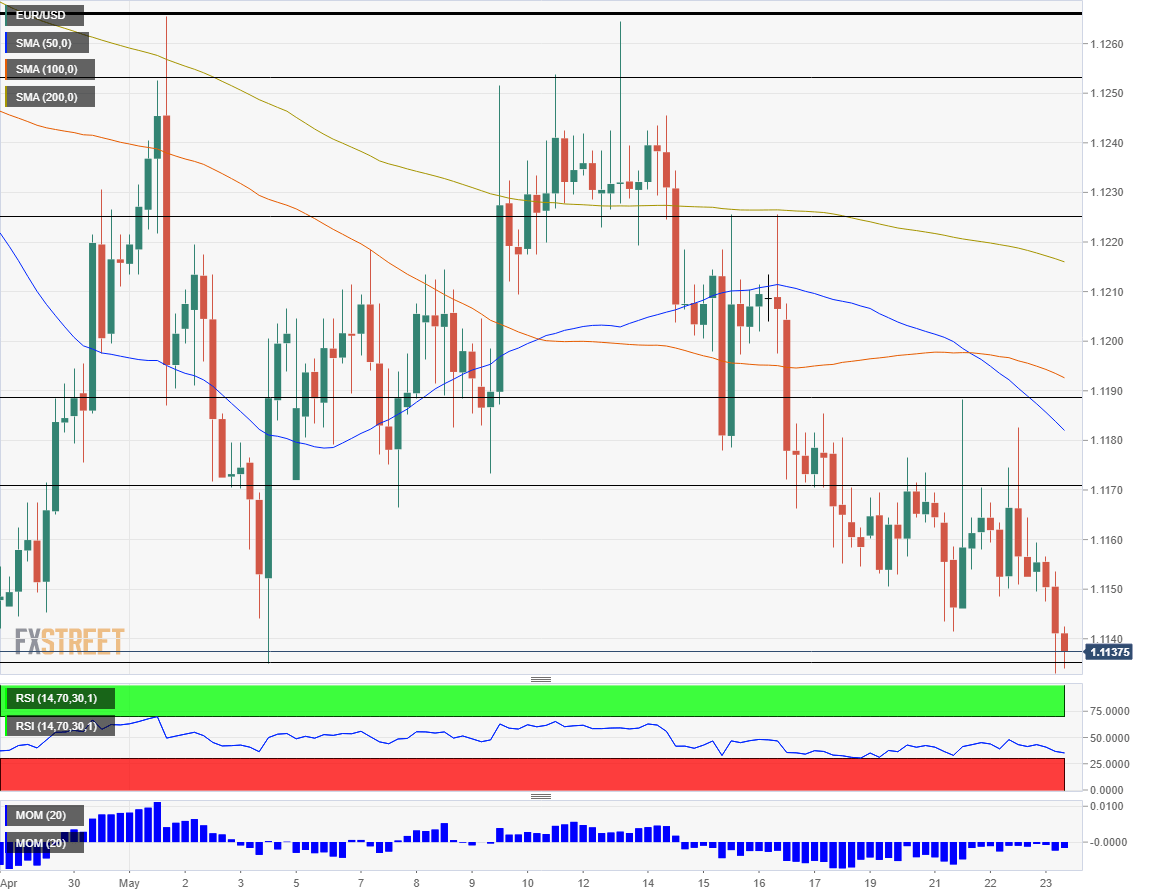 EUR/USD is trading below the 50, 100, and 200 Simple Moving Averages on the four-hour chart, momentum is negative, and the Relative Strength Index is leaning lower yet without entering oversold conditions. In one word: bearish.

Get the 5 most predictable currency pairs
Previous ArticleEthereum price analysis: sellers push ETH/USD towards $230
Next Article GBP/USD is suffering with May