Latest
You are at:Home»Forex News»EUR/USD is not recovering easily amid downside pressures

EUR/USD stabilizes above 1.3000 after dipping below the round number late on Thursday in a volatile session. However, the move up from the lows is a “dead cat bounce” and does not look like a real recovery.

The European Central Bank left its policies unchanged as expected, and President Mario Draghi conveyed a balanced message. On the one hand, the ECB acknowledged the downturn and provided a long list of issues, mostly external. On the other hand, the Frankfurt-based institution is encouraged by a tighter labor market and rising wages.

The big question for the central bank is a question of confidence. If the long list of one-off factors makes way, the economic situation could improve. However, the long-lasting slowdown can affect morale and turn into a deeper rout. Policymakers gave themselves more time to assess the situation, waiting until their March meeting, when new forecasts are due.

EUR/USD initially dropped, then rose with Draghi’s balanced message, and fell after the press conference. The drop can be attributed to reports that the German government is set to slash growth forecasts to only 1% in 2019. The continent’s largest economy has flirted with a recession.

The German IFO Business Climate for January is projected to drop from 101 reported in December.

Euro/dollar also dropped due to a bout of US Dollar strength. US Commerce Secretary Wilbur Ross said that China and the US are “miles away” in trade talks. His words did not help sentiment. Also, the Senate failed to approve motions that would reopen the government. The shutdown is taking its toll on the economy as 800,000 workers are set to miss another paycheck.

The shutdown also takes its toll on economic publications. Durable Goods Orders that were due today are off.

The light calendar leaves markets to move on sentiment related to the prospects of the European economies, the shutdown, US-Chinese talks and also Brexit.

Hopes for a softer Brexit were joined by reports that the Democratic Unionist Party (DUP) on which the government relies is warming up towards supporting May’s deal. The ticking clock and the fear of no Brexit at all are likely behind their potential change of tack.

All in all, the prospects of a no-deal, hard Brexit, boost the pound throughout the week and the euro may enjoy these developments. Several euro-zone economies are also set to suffer in case of a disruptive British exit from the EU. 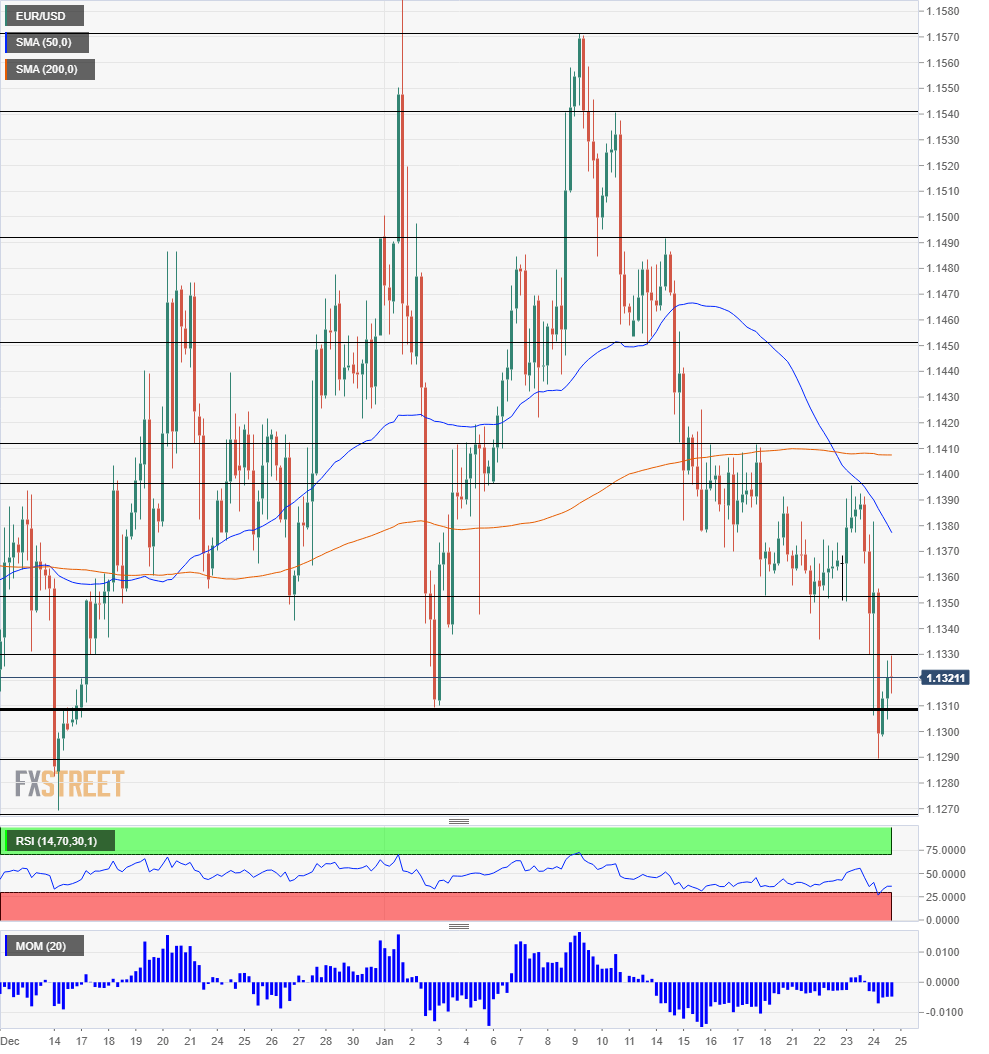 EUR/USD remains on the back foot despite the bounce. Momentum is to the downside, and the Relative Strength Index (RSI) is above 30, not in oversold territory.

Get the 5 most predictable currency pairs
Previous ArticleECB: Risks “moved to the downside” – Westpac
Next Article ECB’s Villeroy: We remain committed to keeping interest rates low