EUR/USD keeps navigating the lower end of the recent range near 1.1240 following last week’s rejection from tops beyond 1.1300 the figure.

Following last week’s multi-day highs above the 1.1300 handle, the pair has sparked a correction lower on the back of a renewed momentum favouring the buck and poor prints in the euro calendar.

In fact, April’s advanced manufacturing PMIs in Euroland published last Thursday have once again disappointed investors and poured cold water over any hope of a pick up in the region.

Combined with this, yield spread differentials between US bonds and German Bunds have resumed the upside and moved closer to 255 pts in the wake of recent strong prints in the US docket, all adding extra legs to the down move in spot.

With most European markets closed due to Easter Monday, the next risk event in the area will be the release of the German IFO survey on Wednesday. Across the pond, the performance of the housing sector during March will be in the limelight in the first half of the week, with the publication of Existing Home Sales later today and New Home Sales on Tuesday.

What to look for around EUR

The broad-based risk-appetite trends are posed to rule the sentiment surrounding the European currency for the time being, while the onoging US-China trade dispute and potential deal expected to remain in centre stage in the next weeks. Recent weak results from key fundamentals in the region plus a now unlikely rebound in the activity in the second half of the year have added to the ongoing concerns that the slowdown in the region could last longer that expected and the ECB is therefore likely to remain ‘neutral/dovish’ for the foreseeable future (say until mid-2020?). On the political front, headwinds are expected to emerge in light of the upcoming EU parliamentary elections in late May, as the populist option in the form of the far-right and the far-left movements appears to keep swelling among voting countries. 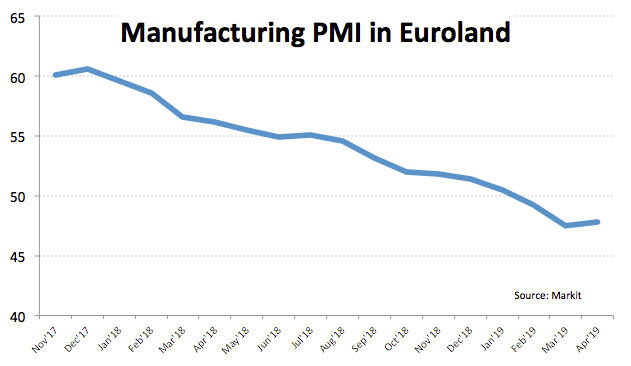 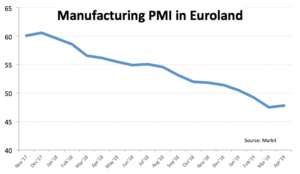 The pair remains stuck within a tight range near 1.1240. The greenback stays sidelined below recent tops. Markets in Europe are closed due to Easter Monday. EUR/USD keeps navigating the lower end of the recent range near 1.1240 following last week's rejection from tops beyond 1.1300 the figure. EUR/USD hurt by data, looks to USD Following last week's multi-day highs above the 1.1300 handle, the pair has sparked a correction lower on the back of a renewed momentum favouring the buck and poor prints in the euro calendar. In fact, April's advanced manufacturing PMIs in Euroland published last Thursday have…