Latest
You are at:Home»Forex News»EUR/USD losing momentum – at risk of turning down

What happens when the data contradicts the central banker’s word? Confusion and choppy price action. US Core Consumer Price Index has accelerated to 2.1% in June – above 2.0% expected. The news came around one day after Jerome Powell, Chair of the Federal Reserve, said that inflation is subdued and that it may persist – a change from his previous dismissal of weak price development as transitory. The news strengthened the US dollar and halted EUR/USD’s advance.

Nevertheless, the world’s most powerful central has all but committed to cutting interest rates on July 31st – its upcoming and highly anticipated meeting. In his second day on Capitol Hill, Powell stressed that investment is significantly slowing down due to uncertainty about trade.

President Donald Trump has expressed his frustration that China has decreased its purchases of US agricultural goods – reportedly breaking a promise made by his counterpart Xi Jinping. The president’s tweets have shown that the road to an agreement between the world’s largest economies is long. Markets have retreated on the intensifying tensions and marginally weighed on the euro.

Back in the old continent, the European Central Bank has repeated the need to act. ECB member François Villeroy de Galhau has been the latest to say that the Frankfurt-based institution should act to support the euro area.

Concerns about German Chancellor Angela Merkel’s health have risen. The long-serving leader – seen as a beacon of stability – has asked to change protocol and sit down during when the national anthems were played in reception to Danish PM Mette Frederiksen. The request came after a third trembling incident. The euro has shrugged off these concerns but if Merkel abruptly steps down, the euro may suffer. 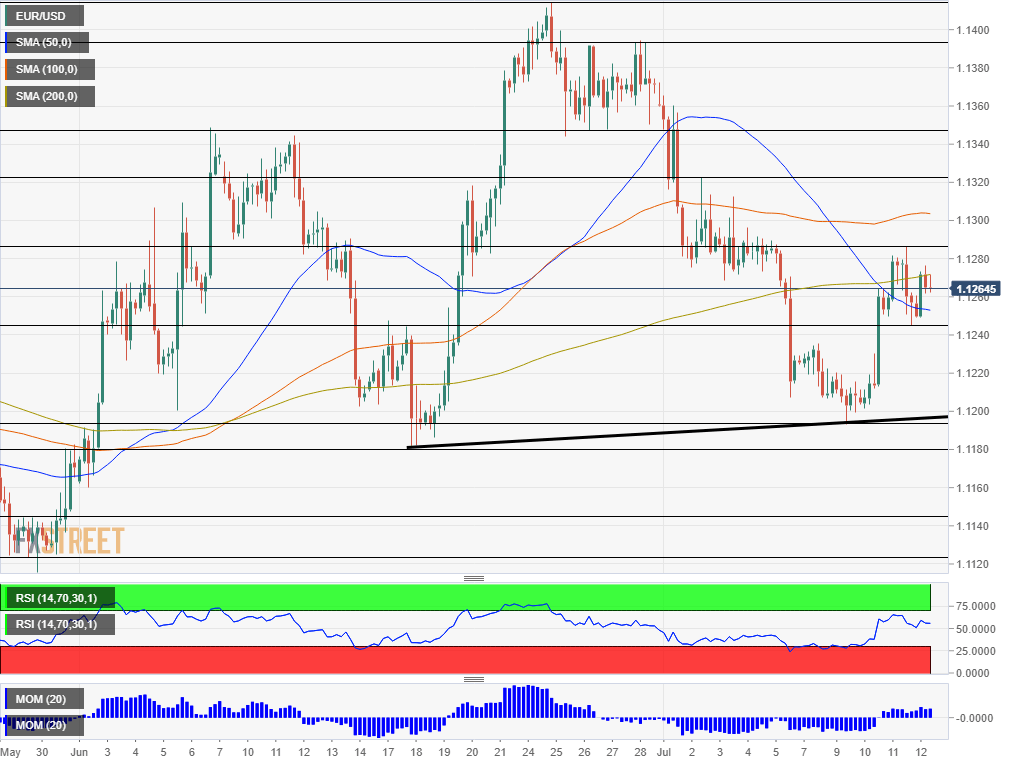 EUR/USD is struggling within a narrow range – between 1.1245 and 1.1285 – which has defined its trading since Wednesday’s rally. The world’s most popular currency pair is struggling with the 50 and 200 Simple Moving Averages on the four-hour chart. Momentum remains positive while the Relative Strength Index is stable above 50.

Overall, the picture is mixed with a minor tendency to the upside.

Get the 5 most predictable currency pairs
Previous ArticleFundstrat Tom Lee on Bitcoin’s pullback: Crypto winter is over
Next Article USD: Less of a safe haven now – ING