Latest
You are at:Home»Forex News»EUR/USD: New week, better luck with cracking 1.20? Laying out the bullish case

Is the fifth attempt to break above 1.20 going to be different than the previous ones? That is the question for EUR/USD traders, who are battling over the round number. While the attention in Europe may be on the upcoming “Superleague” of football teams, currency markets may be ready for outsized moves after days of frustrating range trading.

The good news for the old continent is that the vaccination campaign has picked up and bottlenecks seem to have been removed. Nearly 25 doses have been given per person – or nearly 20% have received at least one shot. 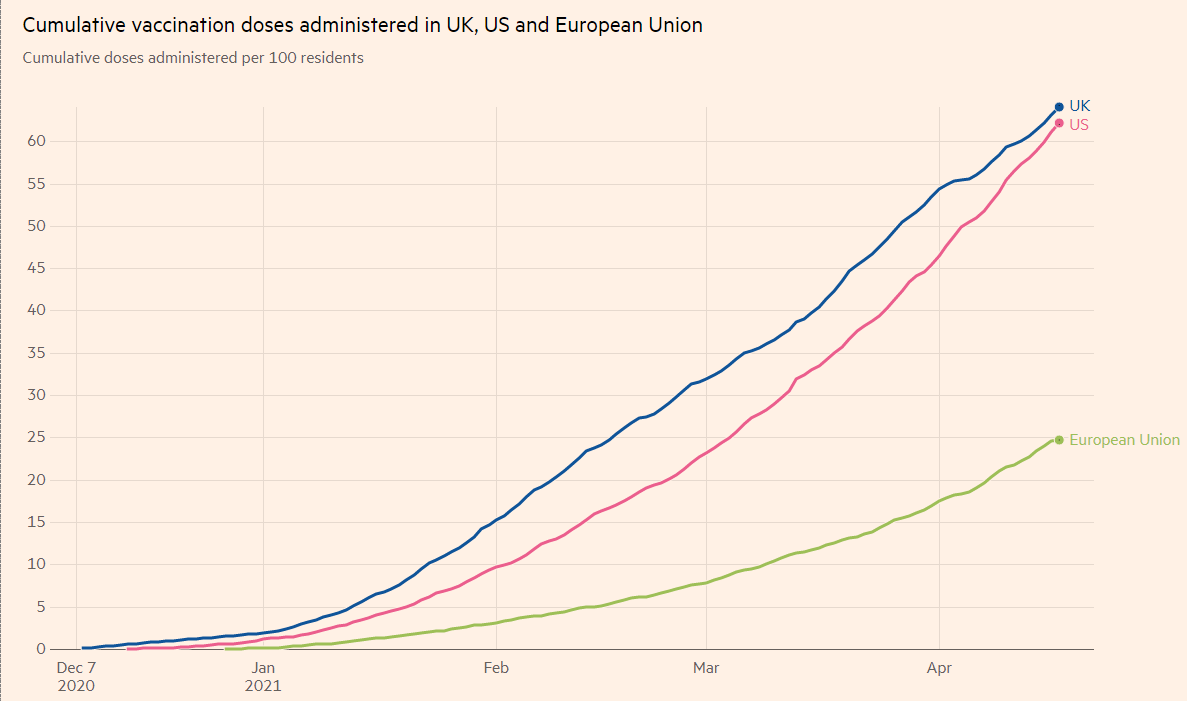 The EU will receive 50 million additional Pfizer/BioNTech doses in the second quarter and the issues with Johnson & Johnson’s single-shot inoculations may be removed shortly. While the US FDA could drag its feet for weeks before releasing its verdict on J&J and links to blood clots, the European Medicines Agency promised updates this week. The US pharmaceutical is on course to deliver 55 million doses through June– covering the same amount of people – if it gets the green light.

The faster vaccination rhythm is far from being priced into the euro.

On the other side of the pond, 40% of Americans have received at least one dose, but the upbeat pace was already factored in. More importantly for the dollar, bond yields are dropping, making the greenback less attractive. Returns on ten-year Treasuries are below 1.56% at the time of writing.

The dollar advanced thanks to the roaring back of America’s economy, reflected in figures such as a 9.8% leap in retail sales last month. However, demand from the US consumer has ripple effects and may also boost the European economies. In the nearer term, such a “risk-on” mood is positive for the currency pair.

One source of worry is the political impasse in Germany’s ruling CDU/CSU bloc. Armin Laschet and Markus Söder have been clashing on who replace Chancellor Angela Merkel as chancellor candidate. However, a quick resolution is likely as early as Monday.

All in all, fundamentals point to a growing chance that EUR/USD bursts above 1.20.

Euro/dollar is benefiting from upside momentum on the four-hour chart and trades above the 50, 100 and 200 Simple Moving Averages – all bullish signs. Moreover, the currency pair exited overbought conditions.

Overall, bulls are in control.

The pause that refreshes: Are currency markets hesitant to run with US data?

Get the 5 most predictable currency pairs
Previous ArticleEUR/USD: Fundamentals point to a growing chance to burst above 1.20
Next Article USD/JPY: Door open to a move to 108.00 – UOB