Latest
You are at:Home»Forex News»EUR/USD: Next correction could be a crash without a stimulus or Brexit breakthrough

Rally, short correction and another rally? That has been the pattern for EUR/USD in recent days but it may run out of steam without another dose of encouraging developments. The world’s most popular currency pair has been benefiting from two developments, which have their countertrends as well.

1) Downing the dollar in Washington

The latest leg down for the safe-haven dollar comes from Washington. House Democrats gave their blessing to a trimmed-down bipartisan deal crafted by Senators. While a package worth $908 billion is below what markets wish for, any cash agreed in the lame-duck session would be a blessing.

Will Republicans and Democrats strike a deal or just continue talking? That could be critical for euro/dollar.

On the other hand, the greenback may benefit from a flight to safety amid another bipartisan consensus – a new bill curbing Chinese firms’ activity in US stock markets is another thorn in Sino-American relations. Outgoing President Donald Trump is set to sign the bill into law.

Apart from both political developments, data is eyed on Thursday. Weekly Unemployment Claims are set to tick down after rising for two consecutive weeks, a worrying development last seen in July.

See US Initial Jobless Claims Preview: What was old is new again

Later on, the last hint ahead of Friday’s Nonfarm Payrolls comes from the ISM Services Purchasing Managers’ Index and its employment component. Growth likely continued in November, yet at a slower pace.

2) Vaccine vs. the virus

One of the main upside drivers for markets came from rapid announcements related to COVID-19 vaccines. The UK regulator was the first in the West to approve immunization, giving another shot in the arm to markets. While most European countries have turned a corner against the virus, the largest country is still struggling.

German Chancellor Angela Merkel announced that restrictions will remain in place until after the Christmas holiday season and into January, expressing concerns about the current situation. In America, the covid crisis reached new highs with hospitalizations topping 100,000, daily infections nearing 200,000 and mortalities hovering around 2,700, levels last seen in the spring.

Will markets focus on the light at the end of the tunnel or the current darkness? The vaccine-virus tug of war is an ongoing theme.

3) Brexit may move the euro

For EUR/USD, a fresh boost could come from Brexit talks. Intense negotiations continue in London and the latest reports suggest that France may veto a deal if it sees too many compromises. While the daily grind of headlines mostly affects the pound, any big move will likely move the euro.

A collapse of EU-UK talks could trigger a substantial correction while a deal could extend the rally, even if other factors such as US fiscal stimulus fail to provide fresh fuel for the rally.

Overall, most positive developments seem to be priced in and fresh optimism is needed to sustain the rally. 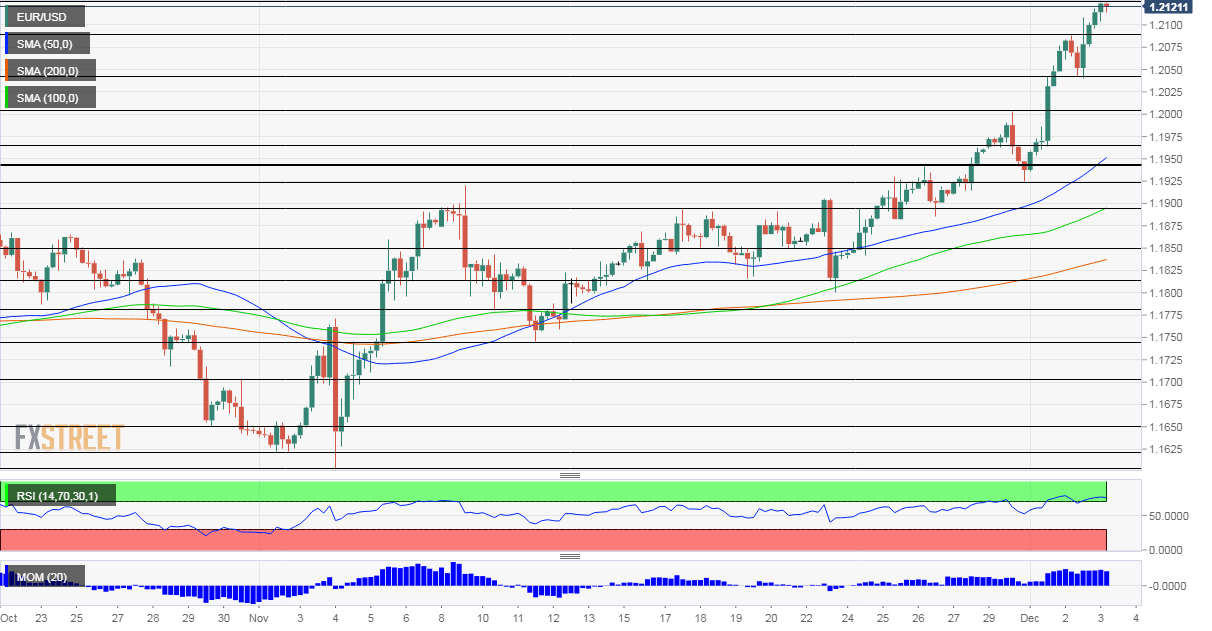 Euro/dollar is benefiting from upside momentum on the four-hour chart, but the Relative Strength Index is well into overbought territory once again. The last time that it happened earlier in the week, the currency pair corrected to the downside.