Latest
You are at:Home»Forex News»EUR/USD: Next stop, 1.2240? European reopening, Fed, fuel the rally

Is rising US inflation a reason to buy the dollar? Only if the Federal Reserve is worried, and that is far from being the case. Officials at the world’s most powerful central bank have been sticking to the message that the increase in prices is transitory – even if one of their preferred measures of inflation is lifting its head.

On Friday, the University of Michigan’s Consumer Sentiment Index showed that inflation expectations shot higher. Nevertheless, Fed Vice-Chair Richard Clarida seemed unmoved, and so did most of his colleagues. The only standout is Dallas Fed President Robert Kaplan, who supports raising rates already next year.

Atlanta Fed President Raphael Bostic is due to speak out later in the day and he will likely reiterate the Fed’s stance. He will speak after the release of  Building Permits and Housing Starts, which are forecast to show bustling activity in the sector.

Will the federal government join in with its own construction activity? Republicans plan to send White House counter-proposals to President Joe Biden’s vast plans for spending $4 trillion on infrastructure and other projects. It is still unclear if Democrats will go it alone or compromise with the GOP. Biden set July 4 as the date to pass legislation, and there is still time for haggling.

On the other side of the Atlantic, Europe is gradually opening up. Several countries in the old continent have jabbed more than a third of their population with at least one dose of a COVID-19 vaccine, and infections are falling. Italy announced it would gradually lift its nighttime curfew, a week after Spain ended its state of emergency. Tourism is picking up steam in these countries.

Updated Eurozone Gross Domestic Product figures for the first quarter are set to confirm the old continent’s misery – a contraction of 0.6%. Nevertheless, investors are looking forward and will likely cheer the recovery.

All in all, there are reasons to expect more rises. 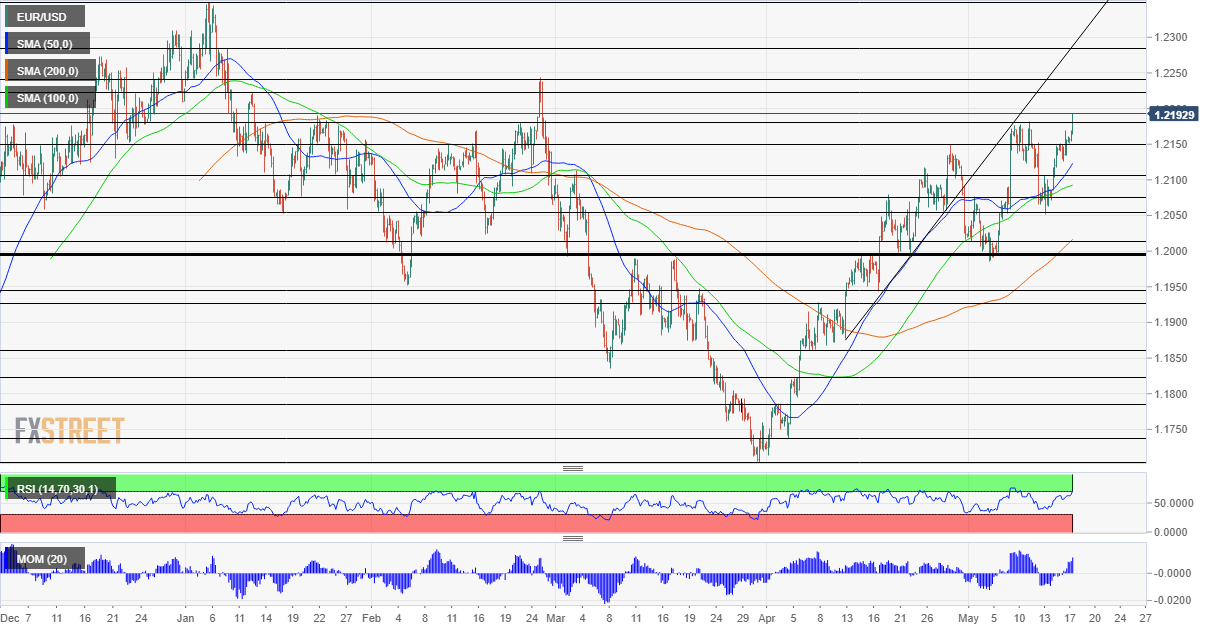 Euro/dollar is benefiting from upside momentum on the four-hour chart while the Relative Strength Index (RSI) remains below 70 – thus outside of overbought conditions. The currency pair is trading well above the 50, 100 and 200 Simple Moving Averages, another bullish sign.