Latest
You are at:Home»Daily Look»EUR/USD path of least resistance is up ahead of the Fed

EUR/USD is stable ahead of the all-important decision by the Federal Reserve. Will Chair Jerome Powell be hawkish or dovish? The world’s most popular currency pair is well=positioned to rise, as support is more significant than resistance.

The Technical Confluences Indicator shows that the pair is battling the 1.1451area which is the convergence of the Bollinger Band 15min-Upper, the previous 4h-high, the BB 1h-Upper, and the Simple Moving Average 100-one-day.

Looking up, there is only some weak resistance at 1.1487 which is last month’s high and the Pivot Point one-day Resistance 3.

The next cap is only at 1.1540 which is the meeting point of the PP one-month R1 and the BB one-day Upper, also in the vicinity.

Close by, another considerable cushion awaits at 1.1415 where we see yesterday’s low, the PP one-day S1, the SMA 200-4h, and the BB one-day Middle.

The most significant support line is at 1.1391 which is a minefield of technical lines including the Fibonacci 161.8% one-day, the Fibonacci 23.6% one-week, and the SMA 50-one-day.

All in all, the path of least resistance is clearly to the upside. 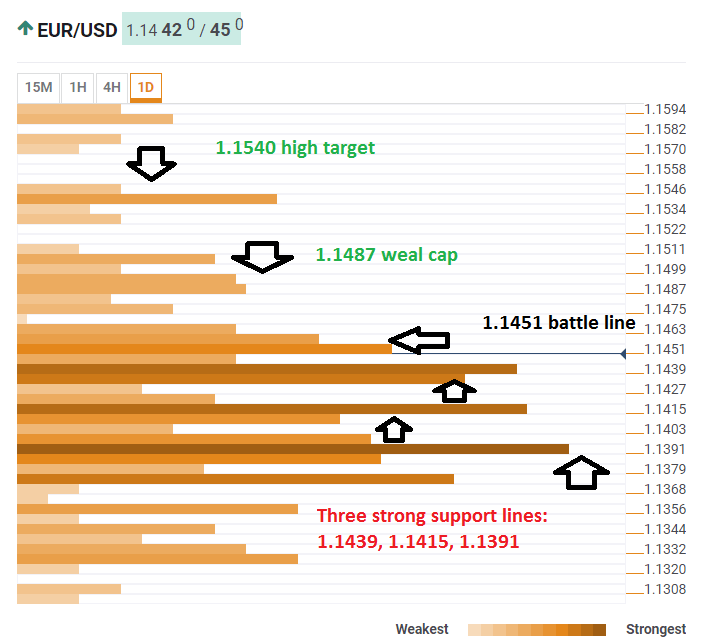 Get the 5 most predictable currency pairs
Previous ArticleUK: Parliament has a majority against a No-Deal Brexit – TDS
Next Article Moody’s: Another US Govt shutdown to spell deeper pain for the economy – Reuters