The following illustrates the prior price action and brings us up to date with what might be expected from this juncture from a top-down analysis across the time frames.

From the prior analysis, the downside was in focus towards a weekly demand area for which the bears are still on target for: 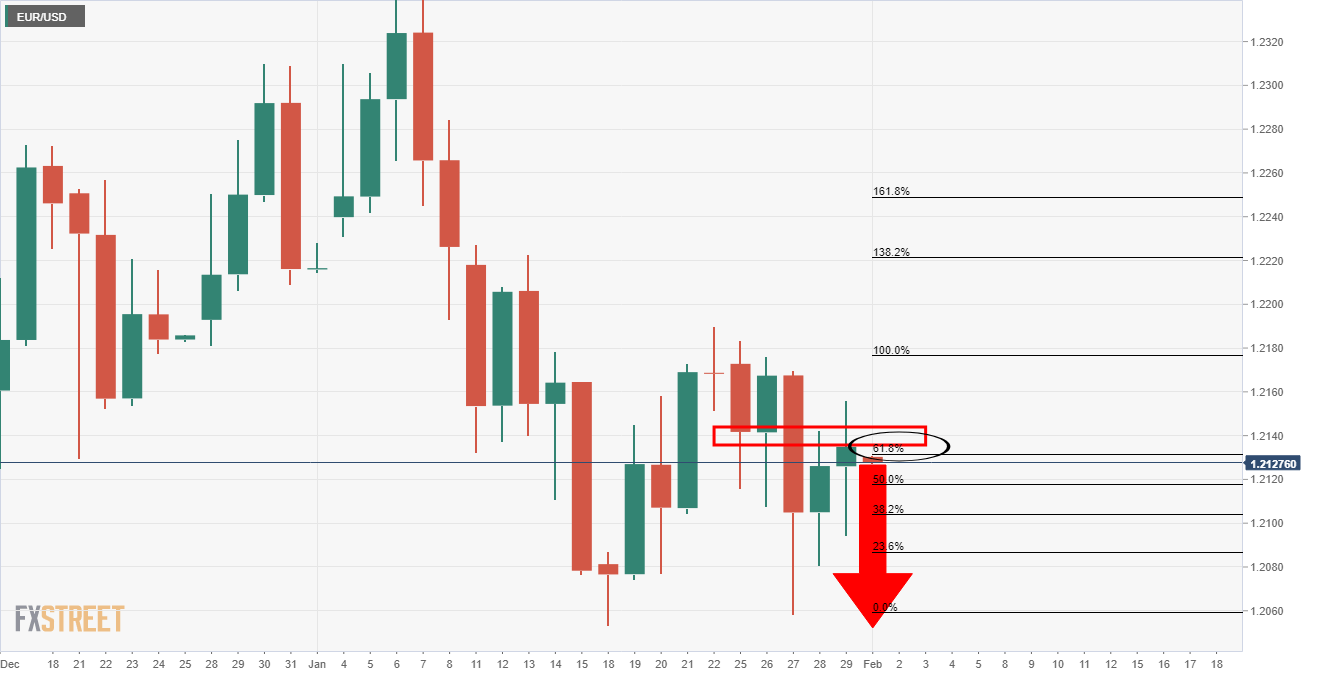 In the above chart, taken on the 29th Jan, the price was resisted at the M-formation’s neckline which would be expected to hold and see the market melt towards a daily target/

As can be seen, which can be followed and understood more closely in the above links to the previous articles, the price respected the said structures and is well on the way to the weekly confluence target.

The target is made up of the 61.8% Fibo of the weekly bullish impulse and mid-late 2020 resistance structure.

However, from a shorter-term perspective, there are prospects of a correction at this juncture.

As per the 4-hour time frame, bears may be on the verge of taking profit as the price plummets towards prior resistance, which would be expected to act now as support.

The round 1.2000 is where the focus is, but regardless of whether the price reaches as far low as that, the Fibonacci levels on the upside are compelling in so much as that the golden ratio, the 61.8%, aligns with the previous support.

However, the lower time frames, such as the hourly, are still showing that the environment is very much bearish with fading taking place from a 10-hour moving average.

More recently, the price has also been resisted at old support:

S&P 500 surges back above 3800 amid positive stimulus, vaccine, earnings vibes

EUR/USD bears in control with eyes on the round 1.2000 level. However, a correction could be on the cards at this juncture, and bulls can monitor for bearish technical indicators turning bullish. Further to the prior analysis, EUR/USD Price Analysis: Bears eye weekly target, 1.2010/20, and, EUR/USD Price Analysis: Bears on top at monthly resistance, the euro has indeed melted to the 1.2010/20 area. The following illustrates the prior price action and brings us up to date with what might be expected from this juncture from a top-down analysis across the time frames. From the prior analysis, the downside was in focus towards…