Latest
You are at:Home»Forex News»EUR/USD ready to recover? Lagarde may lift it with an upbeat message

Giving a green light to euro bulls? The European Central Bank is set to leave its policy unchanged, but may acknowledge the recent green shoots – and also add green considerations to its policymaking. That could unleash the upside, but it all depends on President Christine Lagarde.

The relatively new head of the Frankfurt-based institution received a comfortable legacy. Mario Draghi, her predecessor, cut rates and restarted the bond-buying program in September 2019 amid worsening conditions and rising Sino-American tensions. Since then, the world’s largest economies signed a trade deal and recent economic figures – including inflation that the ECB targets – have improved. Acknowledging the better mood may push EUR/USD higher.

These recent encouraging statistics allow Lagarde to remain above the internal battle between the doves and the hawks and be – in her own words – a wise “owl.” Without any imminent policy changes on the agenda, she may shed light on the bank’s strategic review and a different way to target inflation.

One of the options is to let consumer prices “catch up” and run quickly, compensating for previous years. That could send the euro tumbling down. However, the chances of allowing higher inflation are slim amid opposition from German members.

Another topic that is high on the agenda is the climate crisis. Recent natural disasters and growing demand for action have not been on lost on the ECB. Lagarde may provide some details about how monetary policy – rather than government action – could support green causes. Any cooperation between the central banks and governments to spur investment could turn positive for the common currency.

The coronavirus outbreak continues gripping headlines as the death toll from the SARS-like respiratory disease is rising. Chinese authorities decided to shut down transport links to Wuhan, a provincial capital that is home to 11 million people. The dramatic decision, coming just before the Lunar New Year, has been weighing on markets. The safe-haven US dollar and yen have benefitted from the decision.

The World Health Organization has, so far, refrained from declaring the coronavirus a health emergency. It is closely monitoring the situation closely and may update its guidance as soon as Thursday. 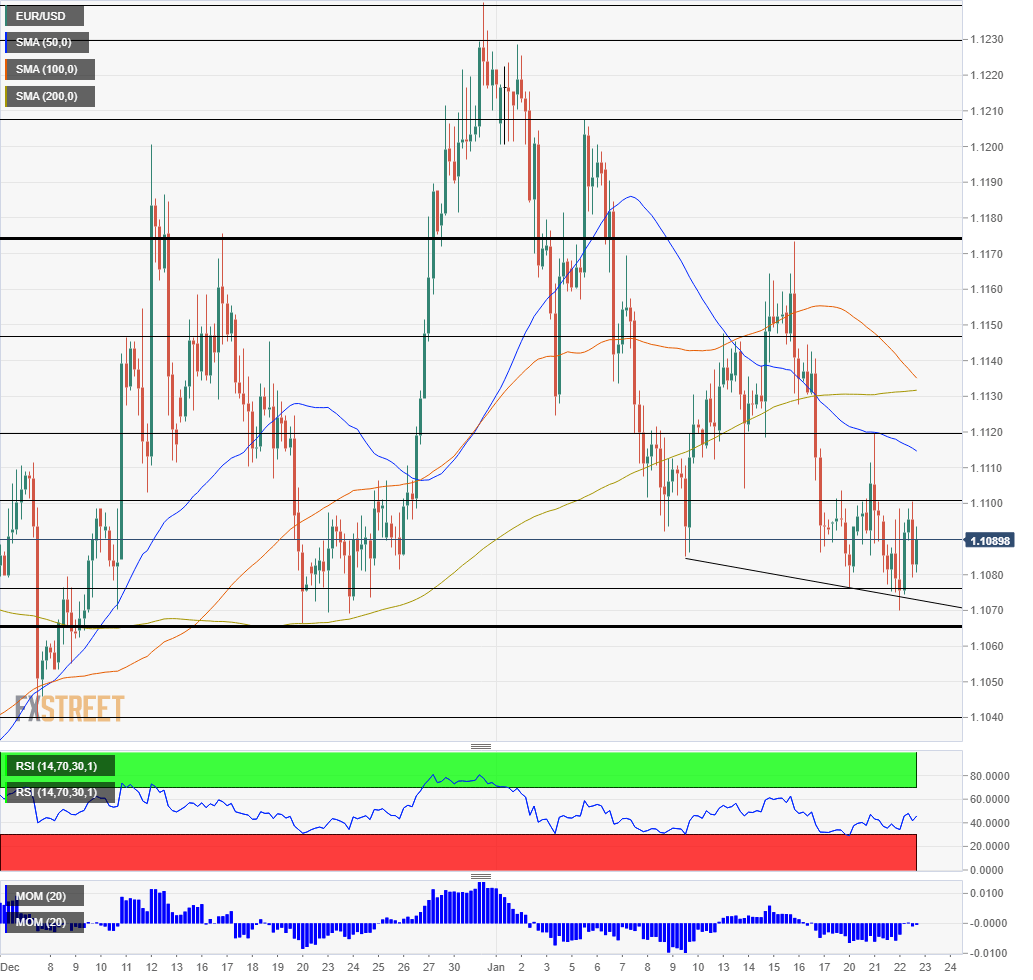 EUR/USD continues trading below the 50, 100, and 200 Simple Moving Averages. However, downside momentum has waned. Overall, the picture is marginally less bearish.