Latest
You are at:Home»Forex News»EUR/USD rises, but remains wary of the EU elections

EUR/USD has hit a new 2019 low at 1.1107, but this was only four pips beneath the previous trough, and it seemed to have marked the end of the downturn. The world’s most-popular currency pair staged a spectacular spring comeback and instead of dipping below 1.1100, it conquered 1.1200.

The moves reflect an “ugly contest” between the currencies. Weak German purchasing managers’ indices contributed to the falls, while weak US data pushed the greenback lower. Markit’s US PMI data missed expectations, projecting a slowdown in the world’s largest economy. That, in turn, pushed investors to the safety of US bonds. Ten-year US Treasury yields dipped below 2.30%, the lowest since late 2017 — making the USD less attractive.

Markets seem to ignore the Fed’s message of not cutting interest rates and focus on the intensifying trade wars which are not letting up and may already be inflicting damage to the US economy. President Donald Trump said that relief for Huawei could be part of broader trade deal, admitting that security reasons were not the sole reason for blacklisting the Chinese telecom giant. And while Trump touted an accord, the administration is reportedly preparing tariffs that would apply to countries deemed as manipulating their currencies.

The US will publish durable goods orders for April later in the day, the first read for the second quarter — feeding into GDP — and thus impacting the Fed’s next decisions.

See US Durable Goods Orders Preview: Sentiment is not enough

Back to the old continent, European Parliament elections are underway and eurosceptic populists are set for substantial gains that could limit reforming the bloc. The full results are due on Sunday night, just as markets open in Asia.

After the recent surge, investors may take profits on fears of a populist success that would send the euro down. 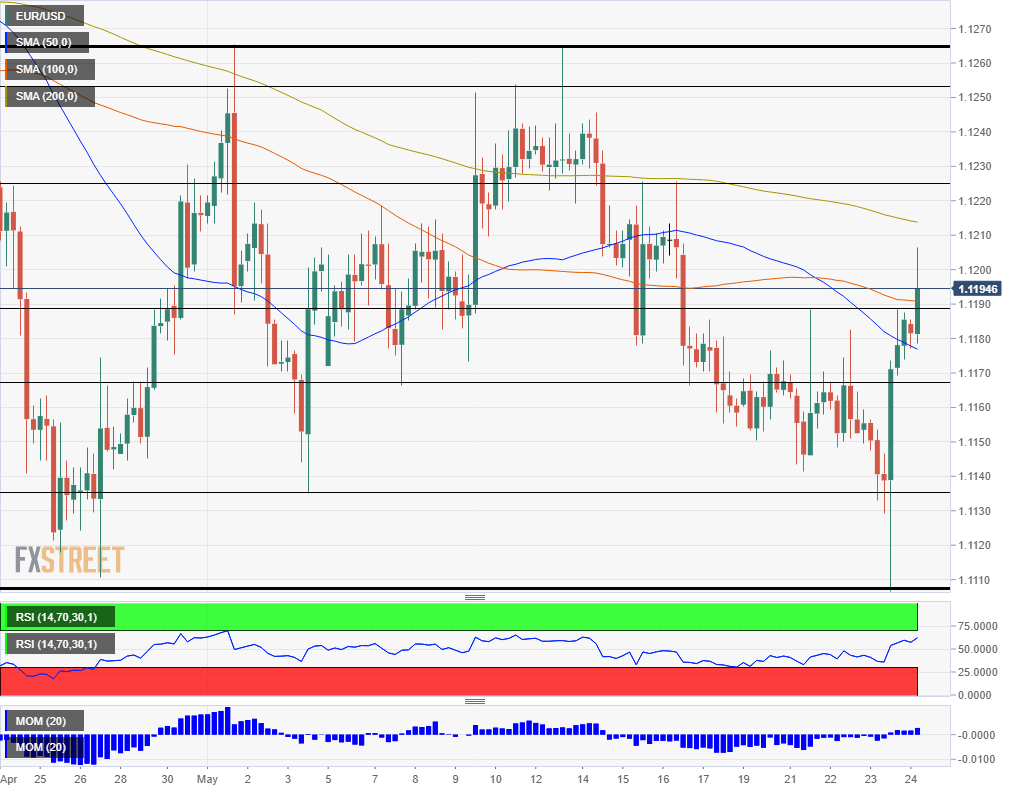 The technical outlook has considerably improved. Momentum on the four-hour chart has turned positive, the Relative Strength Index has moved up, and EUR/USD crossed the 50 and 200 Simple Moving Averages. It still trades below the 100 SMA.

Get the 5 most predictable currency pairs
Previous ArticleGBP/USD trims a part of early strong gains, back below 1.2700 handle
Next Article EUR/USD clings to gain, stays sidelined below 1.1200