Latest
You are at:Home»Forex News»EUR/USD setting higher lows and thinking of a recovery

The Federal Reserve has 224,000 good reasons to ignore President Donald Trump and remain patient on interest rate cuts. The US economy has gained that number of jobs in June – far above 160,000 expected and 120,000 that was feared of.

The US labor market seems robust enough to prevent the Fed from slashing interest rates by 50 basis points at the end of this month nor embark on a long cycle of cuts. Some analysts even doubt the central bank will move forward with a single “insurance” cut.

See NFP Quick Analysis: Time for USD bulls to enjoy the fireworks – the Fed’s cut may be a one-off

Chair Jerome Powell will testify on Capitol Hill on Wednesday and Thursday, and markets are highly anticipating his comments. President Trump has criticized the Fed for its tight monetary policy, saying, “it does not know what it is doing.” He has nominated two monetary policy doves to the bank’s Board of Governors. Christopher Waller, executive vice president at the Federal Reserve Bank of St. Louis, and Judy Shelton, who advised Trump in his campaign and previously supported a return to the gold standard – an unconventional pick.

Powell has remained fiercely independent, shrugging off the president’s criticism.

The greenback has reacted positively to the employment report, and EUR/USD has yet to recover. German industrial output has marginally missed expectations with an increase of 0.3% in May, but the euro zone’s largest economy enjoyed a broader than expected trade balance surprise of 18.7 billion euros. The mixed data has failed to cheer the common currency.

Euro traders are concerned about the next steps by the European Central Bank. The Frankfurt-based institution is set to introduce monetary stimulus amid falling inflation and trade concerns. ECB member Francois Villeroy de Galhau has reiterated the bank’s readiness to act over the weekend.

With few events scheduled on the economic calendar, markets will focus on speculation regarding the next policy moves. 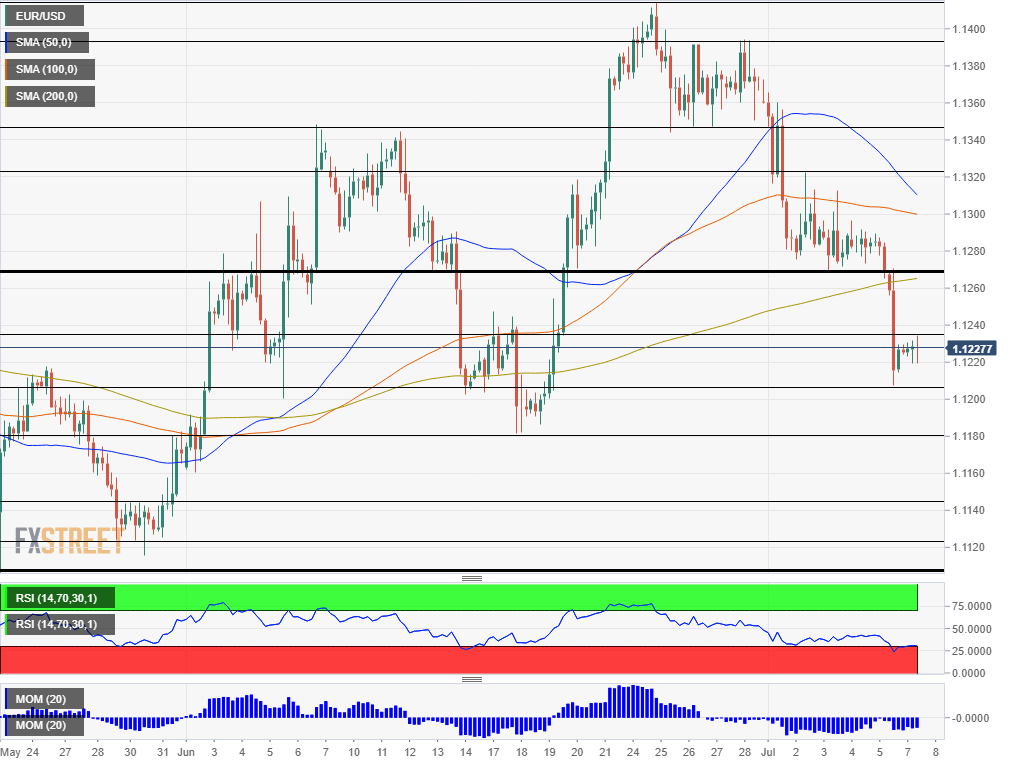 The green arrows on the four-hour chart show higher lows – a bullish sign for EUR/USD. On the other hand, downside momentum persists and the currency pair trades below the 50, 100, and 200 Simple Moving Averages. Moreover, the Relative Strength Index (RSI) has risen above 30 –exiting oversold conditions – and indicating more drops ahead.

Get the 5 most predictable currency pairs
Previous ArticleEthereum market update: ETH/USD hovers above $300 in a slightly bearish market
Next Article USD/CAD hangs near multi-month lows, just above mid-1.3000s