The Brexit deal swept the slow-moving euro off its feet – and may it is time for a reality check. Thursday’s announcement of a new EU-UK accord has been having a broad effect beyond the surge in the pound. The old continent – which was also set to suffer in a no-deal scenario, is also relieved. EUR/USD has reached a high of 1.1140, the highest since late August, breaking the uptrend resistance on its way.

However, the week and the Brexit saga are far from over. The UK parliament convenes for a special session on Saturday to vote on the deal – and it will go down to the wire. Markets are closed on the weekend, but announcements by MPs about their votes are set to rock markets today.

China and the Fed

Markets are digesting China’s Gross Domestic Product for the third quarter, which disappointed with an annual growth rate of 6% – the lowest since the 1990s – and below expectations. However, investors were relieved by Industrial Production, which rose by 5.8% in September, above expectations. German growth heavily depends on exports to China. Analysts’ responses to the mixed data may move the euro later on.

John Williams, President of the New York branch of the Federal Reserve, expressed satisfaction with the state of the US economy and seemed reluctant to cut interest rates once again. His colleagues Esther George, Robert Kaplan, and Vice Chair Richard Clarida will speak later on.

Clarida’s speech is the last public appearance by a Fed official before the bank’s “quiet period.” Clarida may opt to send a message ahead of that decision. Investors are unsure if the world’s most powerful central bank will do.

Overall, events in the UK, China, and the US are set to dominate, as no substantial European events are on the docket. 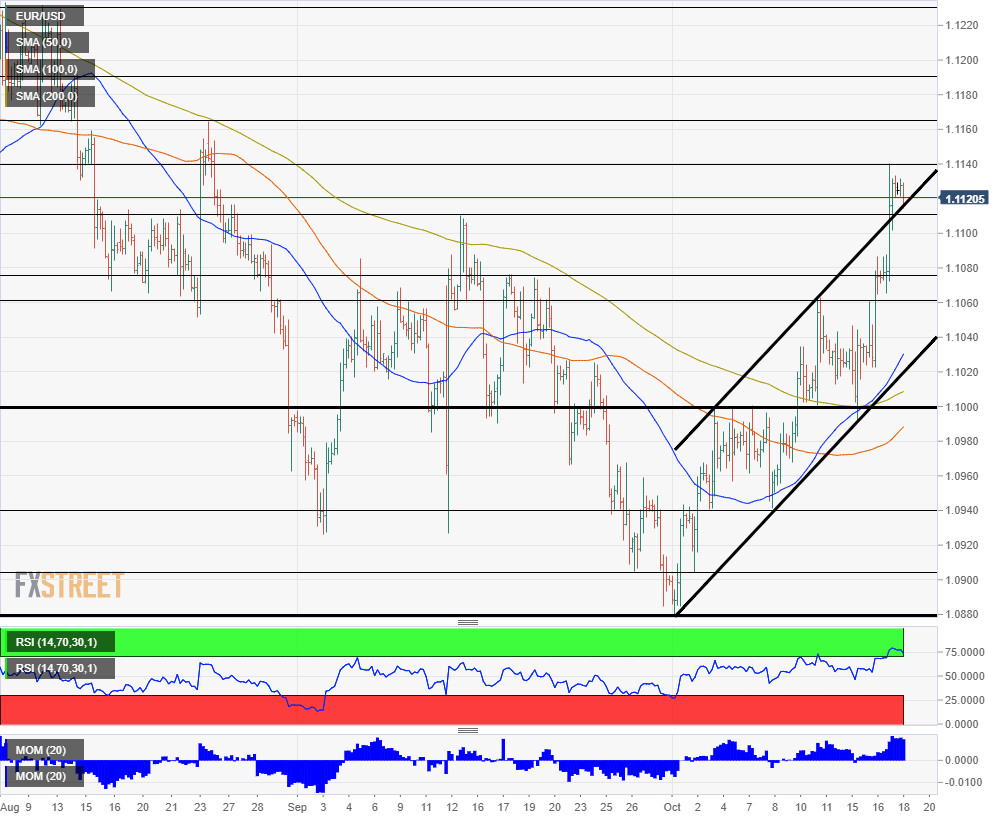 The Relative Strength Index on the four-hour chart is above 70 – indicating overbought conditions – and suggesting a drop. EUR/USD continues trading above the broken uptrend resistance line – which now serves as support. Momentum remains upbeat and the currency pair is well above the 50, 100, and 200 Simple Moving Averages.

Support awaits at 1.1115, which was September’s high. Next, we find the 1.1060-1.1075 area. Both were resistance lines in September and in October. Further down, 1.10 is robust support after capping EUR/USD in early October.

Get the 5 most predictable currency pairs
Previous ArticleCrunch time for Brexit in parliament – GBP/USD on the move
Next Article EUR/JPY Technical Analysis: The cross remains firm. Next stop at the 200-day SMA above 122.00