Latest
You are at:Home»Forex News»EUR/USD still leaning lower, despite optimism

The peak of the vacation season is reflected in financial markets – finally. However, stability in markets cannot be attributed to the warm weather, but soothing words from both sides of the Atlantic.

German finance minister Olaf Scholz has opened the door to fiscal stimulus – a significant change of direction. The government of the euro zone´s largest economy has insisted on budget surpluses and austerity for years. However, after it reported a contraction in the second quarter, domestic and international pressure is mounting. Investors are paying Germany to lend money to it – even with a time horizon of 30 years. Scholz also released a figure: €50 billion:

The last crisis cost us 50 billion euros, according to my estimates.We have to be able to muster that and we can muster that.

His words helped soothe tensions and also lowered the pressure on Italy. The euro area’s third-largest economy is still struggling with a political crisis that aims to bring the government down. Prime minister Giuseppe Conte, an independent, will appear before parliament on Tuesday. He will face a vote of no-confidence as the row between his deputies Matteo Salvini, and Luigi di Maio worsens.

The two coalition partners have lost confidence in one another, but elections are no certainty. Salvini – that called for elections – seems less eager to go to the polls and the center-left Democratic Party may try to form a government with the 5-Start Movement. The drama in the debt-struck country is unfolding, and investors would like to see political stability and adherence to the EU’s budget rules.

For the euro to rise, it is critical that Germany begins spending and allows others to spend – and that is not happening just yet.

US President Donald Trump has expressed optimism about reaching a trade deal with the world’s second-largest economy, saying “we are doing very with China, and talking.” In the meantime, Beijing has not commented on negotiations but allowed its yuan to strengthen – calming currency concerns.

Trump and also his economic adviser Larry Kudlow – which toured the TV studios – rejected fears of a recession, touting the strength of the US economy. Indeed, July’s retail sales and inflation numbers beat expectations, but consumer confidence has dipped. The Federal Reserve will have the chance to respond to the data and hint about the next moves – via the meeting minutes on Wednesday and via the all-important speech by Chair Jerome Powell on Friday.

The economic calendar is light today, leaving the scene to politics. 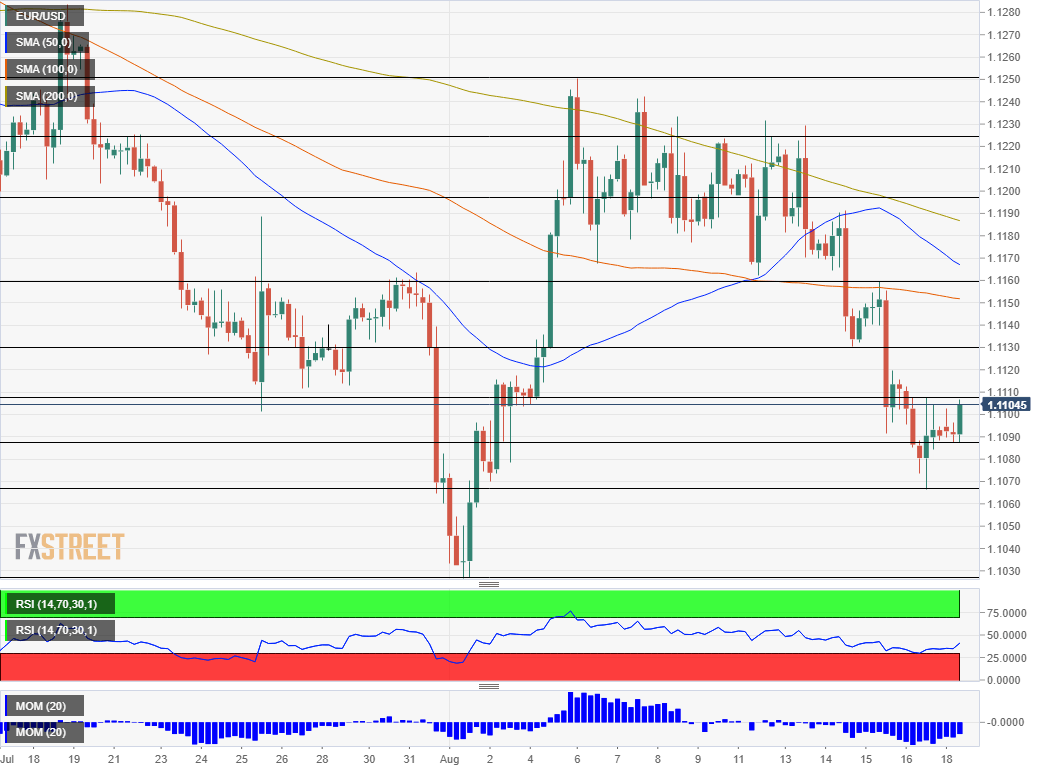 EUR/USD continues suffering from downside momentum despite bouncing from the lows. Moreover, the currency pair is trading below the 50, 100, and 200 Simple Moving Averages – bearish signs.