Latest
You are at:Home»Forex News»EUR/USD: Stimulus hopes set to send euro down from critical resistance

The currency pair is at crossroads – EUR/USD has reached the critical 1.2050 level after benefiting from dollar weakness, but there are good reasons for rejection and a fresh downfall.

The US reported an increase of only 49,000 jobs in January, significantly below investors’ elevated estimates that had been built on robust leading indicators. Moreover, January’s meager increase came on top of downward revised data for previous months. Markets shrugged off an increase in hours worked and the drop in the unemployment rate from 6.7% to 6.3%.

The calculation is this – weaker growth means lower inflation, buying bonds, pushing yields lower – the dollar is less attractive. However, the narrative has changed over the weekend. US President Joe Biden and Treasury Secretary Janet Yellen have taken advantage of the weak employment data to make their case for a large stimulus plan. In a media blitz, they have reiterated “going big” – perhaps as much as $1.9 trillion in relief they originally presented.

The push for substantive spending has been causing a sell-off in Treasuries on Monday, sending returns on ten-year bonds to near 1.20% and supporting the greenback.

Where next from here? The answer lies with the administration and with moderate Democratic senators. Biden’s party has the slimmest of majorities in the upper chamber – needing all his members to be on board. Senator Joe Manchin of West Virginia and Kirsten Sinema of Arizona are seen as the most centrist lawmakers.

Whatever they agree to, can probably pass. So far, Dems have advanced a blueprint for large stimulus but have yet to fill the details as negotiations continue and as Congress prepares for former President Donald Trump’s trial. Progress toward a larger boost would push the dollar higher, while compromises with moderates would send it lower.

Apart from the stimulus, EUR/USD bears have an advantage when it comes to coronavirus. The old continent’s vaccination campaign is set to gather some steam, but the US is far ahead, inoculating over 9% of the population in contrast to only 2-3% in many European countries.

Moreover, recent covid statistics have been more encouraging in the US, while Europe is more exposed to the B 1.1.7 strain, aka the British variant. This more contagious version of the disease is spreading quickly in America, but its impact remains minor for now.

Overall, fundamentals are pointing to the downside. 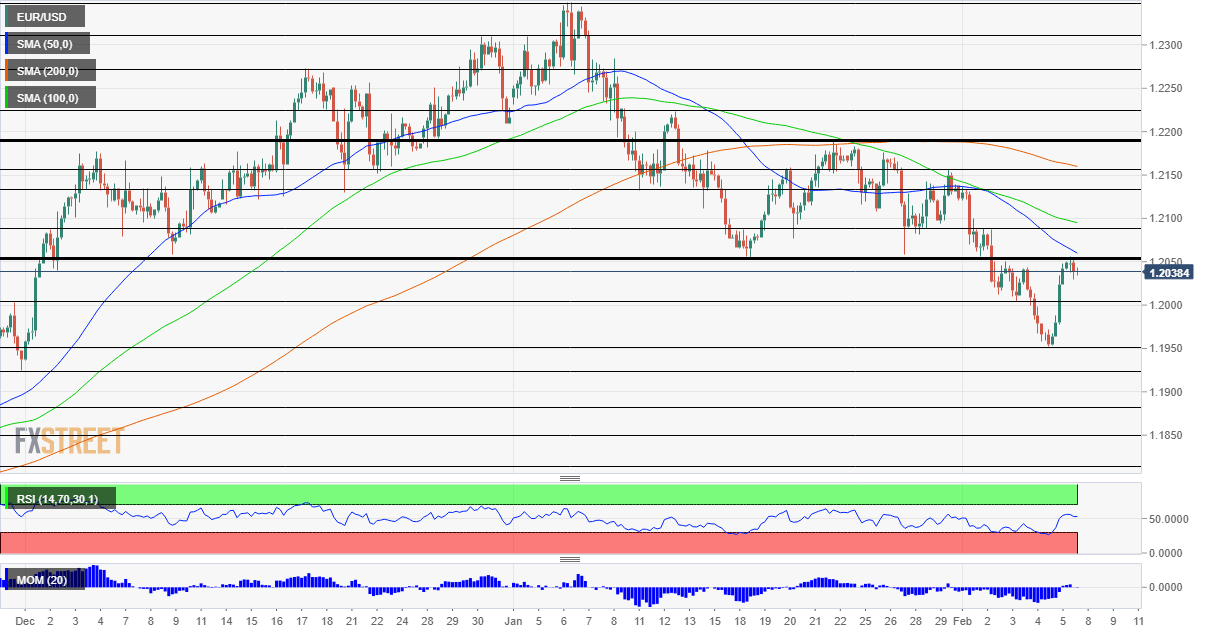 Euro/dollar has hit the critical 1.2050 levels which had supported it three times in January before the downfall late in the month. While momentum on the four-hour chart has turned to the upside, the currency pair is trading below the 50, 100, and 200 Simple Moving Averages. The 50 SMA is converging with 1.2050, making it even more robust.