Latest
You are at:Home»Forex News»EUR/USD: Three reasons why the correction may be over, new highs in sight

Two steps up, one step down, and now a fresh rise? That is the impression from looking at the EUR/USD chart – and there are good reasons for seeing the rally resuming after the recent fall.

The greenback has been gaining ground in a risk-off mood – investors have flocked to the safe-haven dollar while stocks declined. This may change soon.

Here are three reasons why the euro may move higher:

The much-needed downside equity correction may now make way for a fresh increase, as seen in S&P 500 futures. The Western world is emerging from the virus, as seen in America’s decline in COVID-19 cases. A gentle increase in shares may weigh on the dollar.

More importantly, US ten-year yields back below 1.60%, and that could also send the greenback lower, despite a looser correlation between the currency and returns on US debt.

The European Medicines Agency announced that Johnson & Johnson’s single-shot covid vaccines are linked to blood clots – but that these are extremely rare and do not warrant abandoning their usage. Several European countries have accepted that the benefits far outweigh the risks and are set to begin using these jabs as early as Wednesday.

Roughly 20% of Europeans have received one shot, half the rate seen in the US. J&J’s is set to send a total of 55 million shots to the EU in the second quarter, covering around 11% of the population – in addition to all the other vaccines. That implies a quicker exit from the crisis.

The mix of a quicker immunization effort, US demand, and other factors may lead the European Central Bank to upgrade its language and perhaps signal less support is needed. Investors may better position themselves ahead of Thursday’s event.

Another boost comes from Germany, where the Constitutional Court gave the green light to deploy massive fiscal support approved last year. While there were few doubts about the decision from Karlsruhe, it provides another sigh of relief.

All in all, there is room for EUR/USD to resume its gains. 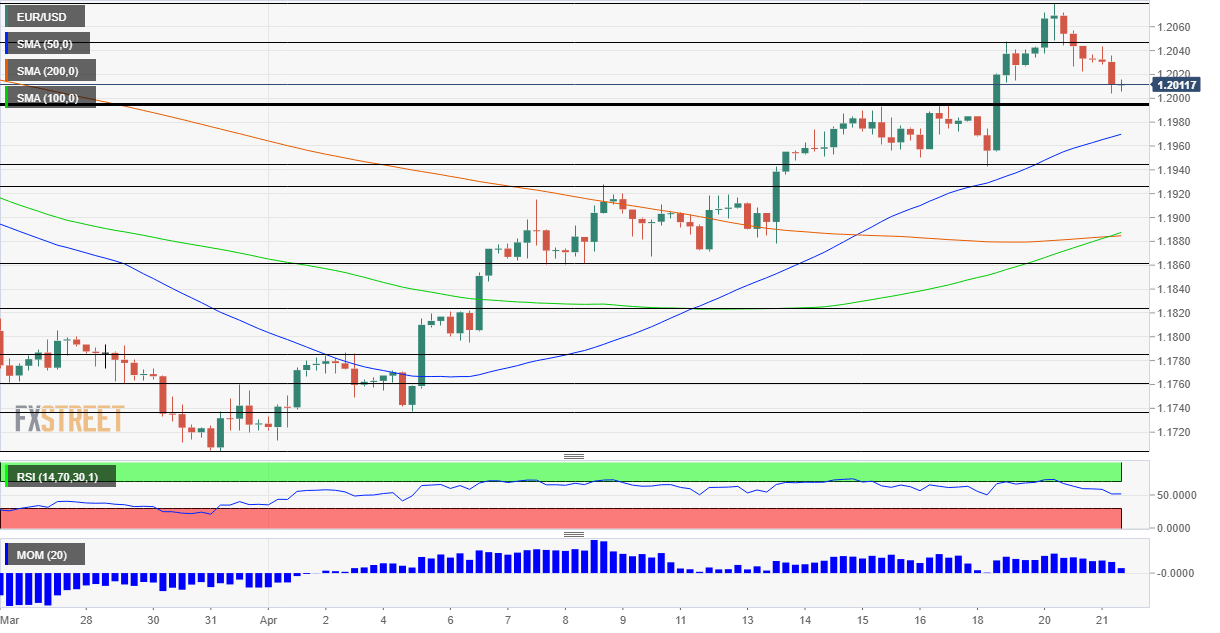 The four-hour chart is showing a clear uptrend so far during April. The recent descend from the highs still leaves momentum pointing to the upside and the currency pair above the 50, 100, and 200 Simple Moving Averages (SMAs). Moreover, the Relative Strength Index (RSI) is below 70, outside overbought conditions.

The pause that refreshes: Are currency markets hesitant to run with US data?