Latest
You are at:Home»Forex News»EUR/USD troubled by Trump, trade tariffs, and the wedge

Most children love carousels that go round and round – but the EU may not find America’s “carousel tariffs” amusing. The administration has been considering slapping duties on the EU – and moving these levies between different product categories to maximize pressure. The White House has been given the green light from the World Trade Organization (WTO) that ruled against the EU’s subsidies of Airbus – the European aviation giant.

By shifting the tariffs between different goods, the uncertainty would create “maximum pressure.” The news has pressured the common currency. Moreover, President Donald Trump has lambasted China in his UN speech – weighing on sentiment.

Another factor that drives stocks lower – and the safe-haven yen and dollar higher are also related to the president. US House Leader Nancy Pelosi has announced an official impeachment inquiry into Trump’s alleged wrongdoing. In a phone call with his Ukranian counterpart Volodymir Zelensky, the US leader reportedly asked his opposite number to dig up dirt against leading Joe Biden – former Vice President and leading Democratic candidate to combat Trump in the 2020 elections.

While the chances of ousting Trump are nonexistent in the Republican-led Senate, the harnessing of six House committees to investigate him cause distraction and uncertainty, stocks have been dropping, and the story adds to the risk-off sentiment.

Data have been mixed on both sides of the Atlantic. The German IFO Business Climate beat expectations with a rise to 94.6 points – but economists at the institution were concerned about the slowdown. The Conference Board’s Consumer Confidence disappointed with 125.1 points, but the figure continues reflecting high levels of consumption.

US New Home Sales for August are due out later today, and they are expected to an annual rate of 660K. However, developments related to trade are set to dominate today’s trading. 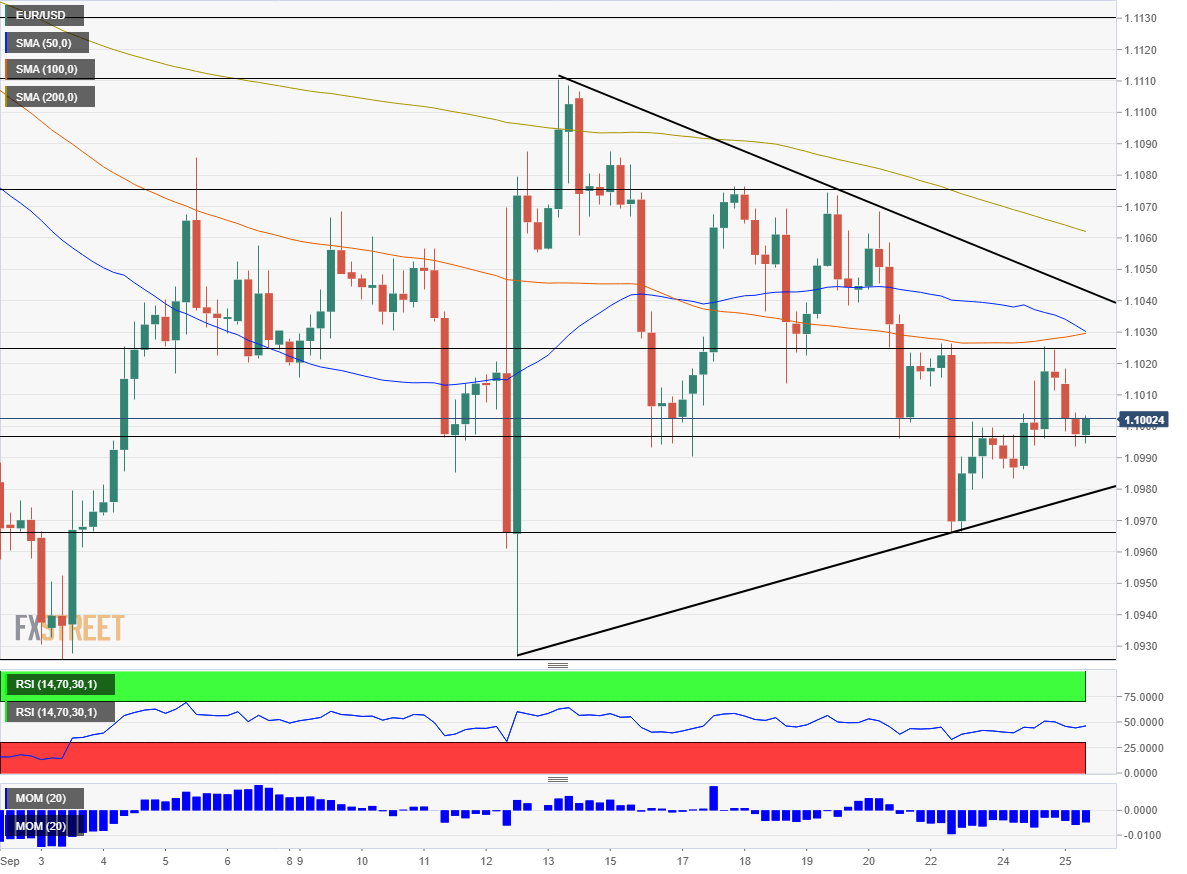 EUR/USD has been trading in a narrowing triangle or wedge. Technical analysis textbooks suggest that after trading within higher lows and lower highs, the currency pair then picks a direction and moves sharply in that direction. Technical indicators are pointing to the downside. The currency pair trades below the 50, 100, and 200 Simple Moving Averages and downside momentum is substantial.