Latest
You are at:Home»Forex News»EUR/USD: Why bulls may come on top as three forces fight for influence

Americans are off to a shopping spree, but does that make King Dollar unstoppable? The easy answer is that the answer depends on weekly jobless claims – Thursday’s critical data point – but there are other factors to take in into account.

Here are three factors to consider:

President Joe Biden continues pushing through his proposed $1.9 trillion coronavirus relief package and he is running into some reluctance from another Joe. Senator Joe Manchin III is the most conservative Democrat in the upper chamber and he is flexing his muscles. The West Virginia lawmaker opposes approving measures that would violate the “Byrd rule” – which limits any legislation passed by a small majority to strictly budgetary moves.

If Biden gets a smaller package – or any delay – would push investors back to bonds amid prospects of lower growth and less debt issuance. In turn, softer yields would make the dollar less attractive. All in all, progress on large stimulus is dollar positive and any road bumps would weigh on it.

The Federal Reserve’s meeting minutes from its January meeting showed that the world’s most central bank is upbeat on America’s growth prospects in 2021 – more than beforehand. However, the Fed seems unmoved from all the talk about higher inflation and is unlikely to raise rates nor taper its bond-buying scheme.

Under these circumstances, the greenback will likely remain under pressure.

See US Federal Reserve Minutes: Watch what we do and what we say

3) Shopping but still out of work

EUR/USD most recent downward move was triggered by superb US Retail Sales – volume leaped by 5.3% in January, far above expectations. Some of the rise may be attributed to seasonal adjustments which are skewed by the pandemic. On the other hand, there is no doubt that the stimulus checks from the previous package that Congress passed contributed to the boost. Some are concerned that this good news is bad news – as it may lower pressure for stimulus.

However, as both the Fed and the White House know, unemployment remains high, with some ten million Americans still out of work. Weekly jobless claims are set to provide a reminder that the economy is still struggling. While applications have been falling from the highs, levels above 700,000 are still worse than in the peak of the financial crisis.

See US Initial Jobless Claims Preview: Can they help the dollar?

All in all, there is room for a downside correction in the dollar – at least in the short term.

What about the old continent? In Italy, Prime Minister Mario Draghi has called his fellow citizens to pull together and focused on European integration, music to the euro’s ears. On the other hand, the EU’s vaccination campaign continues advancing at a sluggish pace, despite new deliveries of doses. Fortunately, cases and deaths are falling. 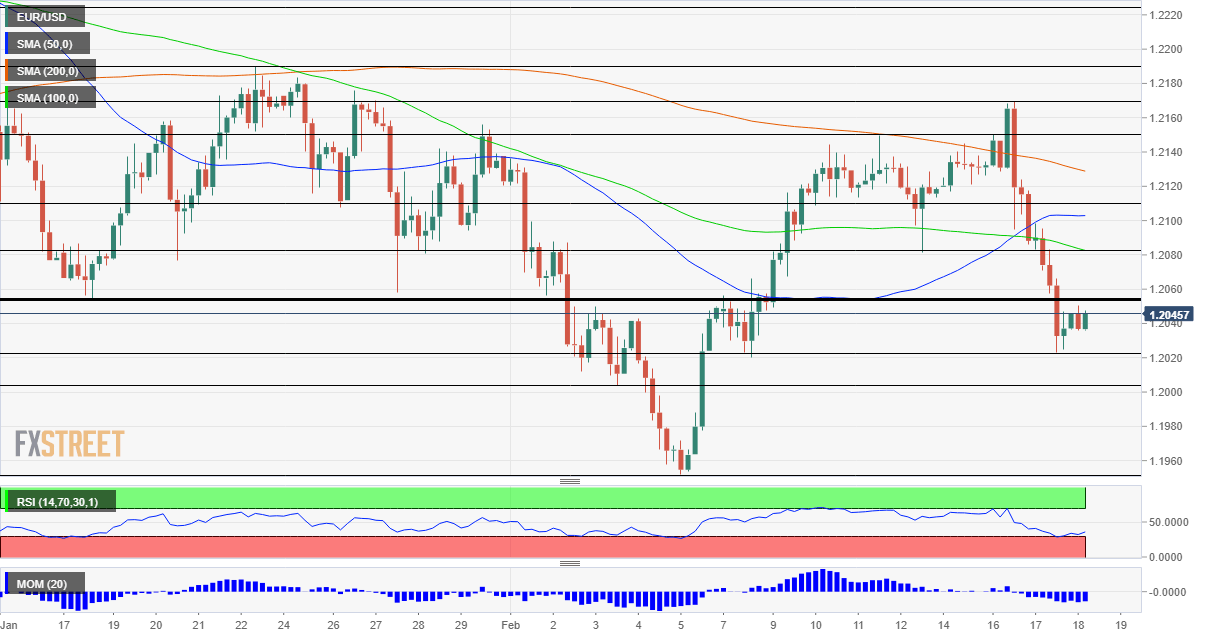 Bears have taken over – euro/dollar has dropped below 1.2055, which has been serving as a separator of ranges since mid-January. The currency pair is now on the lower side of this critical barrier. Moreover, momentum on the four-hour chart is to the downside and EUR/USD is trading below the 50, 100 and 200 Simple Moving Averages.

The silver lining for the bulls is that the Relative Strength Index is nearing 30 – closer to oversold conditions.