According to Europa Hungary is a non-Eurozone member of the EU. Hungary’s economy was driven mainly by industry, 26.4%; retail spending and consumer services, 18.5% and public spending at 17.5%. By far, Hungary’s largest import and export partner is Germany, accounting for 24.95% of all exports and 49% of the top 6 export destinations and 23.17% of all imports; 43% of the top 6 import originations.

In general, nearly 75% of all Hungarian exports and nearly 70% of all imports are exchanged within Europe and Russia. Lastly, Hungary’s sovereign debt is rated BB+, Ba1 and BB+ by the three ratings agencies; Fitch recently upgraded Hungary’s outlook to positive.

The Hungarian economy has done relatively well in the years since the financial crises. The country was burdened with too many foreign currency mortgages, many in Euros but mostly in Swiss Francs well before the SNB uncoupled the Euro from the Franc. As the Franc appreciated, the exchange between the Franc and Forints increased, greatly inflating mortgage payments. The situation became critical after the SNB actions of 15 January 2015. Eventually the Prime Minister Viktor Orban’s government took actions, first by cutting taxes on banks and established a ‘bad bank’, thus relieving the banking sector of ‘ballooning’ bad loans and then subsidizing low interest consumer loans. The most recent step involves converting foreign currency mortgage and auto loans to Forints, including 229,000 Swiss Franc denominated loans. 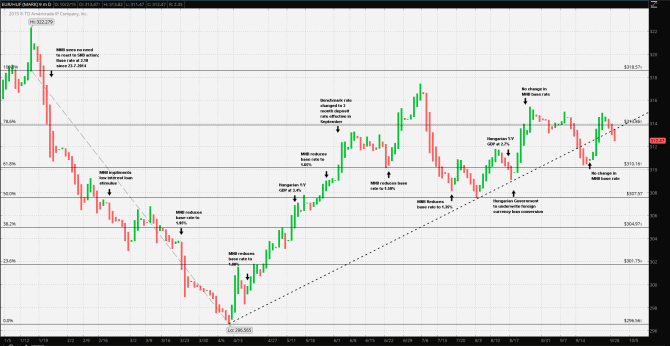 The Forint has had volatile swings relative to the Euro this year, experiencing its weakest on the day of the SNB 15 January action, 322.279 to the Euro to its strongest point, 13 April at 296.565; an 8% increase. From the 13 April high, the reversal coincided with the global bond market correction from about mid-May through early June. The Forint stabilized in early July. The combination of cooperative MNB and government action, a series of rate cuts, reduced the base rate from 1.95% in March, to 1.35% in July. It should be noted that strong demand for autos, Mercedes, Suzuki and others assembled in Hungary, gave a solid boost to the economy; 3.4% year over year, as reported in May.

However, all was not well between Hungary and fellow EU members. Prime Minister Orban’s public rhetoric against the accepting refugees stood in direct opposition to the EU’s position. Hungary is a Schengen Area member. On 17 June, it was announced that Hungary would build a 175-km security fence along its Serbian border.

When in July the MNB Monetary Council decided to reduce the base rate to 1.35% it declared an end to its easing cycle, begun in March. MNB President Gyorgy Matolcsy stated, “…We think we were able to create one of the most favorable business environments of Hungarian economic history with these two rate-cut cycles…” Within three weeks of the July policy meeting, the Hungarian parliament voted to convert foreign currency denominated loans into Forint loans, the conversions to be shared by both government and private sector lenders.

In spite of the back and forth rhetoric, a 108 mile fence on the Serbian border and others under construction, the economy little ill effect, at most a projection of a decline in foreign investment.

The whole point being that since the beginning of 2015, through MNB as well as government action, the Hungarian economy has made a remarkable recovery. Key to this recovery were global demand for automobiles,( many brands with assembly plants in Hungary); demand for auto parts, also manufactured in Hungary; tax reductions on private sector banks,  foreign currency loan relief, as well as subsidized loans and last but not least low lending rates.

The Hungarian handling of the refugee crises, its ‘Black Swan’ crises, is another matter. Hungary may be found to be in violation of the Schengen agreement, let alone expected EU principles and cooperation. The Hungarian public seems to be divided on the issue, and the Orban government, having suffered some defeats in a general election, will not be too quick to threaten to secede from the EU over the matter. Nor would the EU wish to worsen the matter by threatening some type of sanctions. What could affect the recovered economy; hence the Euro/Forint exchange is a global economic contraction, particularly in demand for autos and parts, followed by an expanded ECB QE, already noted by Mr. Draghi at a recent regularly scheduled EU testimony.

All things remaining equal, it’s not unlikely that EUR/HUF will trade in a channel 309 support, 315 resistance. However, much depends on German auto export demand. 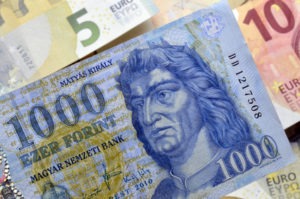 According to Europa Hungary is a non-Eurozone member of the EU. Hungary's economy was driven mainly by industry, 26.4%; retail spending and consumer services, 18.5% and public spending at 17.5%. By far, Hungary's largest import and export partner is Germany, accounting for 24.95% of all exports and 49% of the top 6 export destinations and 23.17% of all imports; 43% of the top 6 import originations. In general, nearly 75% of all Hungarian exports and nearly 70% of all imports are exchanged within Europe and Russia. Lastly, Hungary's sovereign debt is rated BB+, Ba1 and BB+ by the three ratings…