Latest
You are at:Home»Forex News»Euro braces for bad Thursday ahead of Good Friday (for the dollar)

Euro bears are not taken for a ride on April Fool’s Day – the common currency remains under pressure and for worrying reasons. Coronavirus cases continue rising in the old continent and the threat of overwhelming France’s health system caused President Emmanuel Macron to impose a monthlong lockdown. His move joins Italy, Germany and other countries.

The old continent is bracing for further pain from the virus, especially as lags behind in vaccinations. While the pace of immunization is set to accelerate, only around 12% of the population received one jab and a manufacturing issue at Johnson & Johnson’s US factory may cause even more delays.

EUR/USD has been holding up above 1.17 as US yields retreat from their highs. One of the reasons for the calm is that US President Joe Biden presented his massive $2.25 trillion infrastructure spending plan along with a funding scheme – tax hikes are coming. While higher rates for corporates may weigh on Wall Street, it means less debt issuance, which is positive for bonds. The resulting drop in yields weighs on the greenback.

Two critical data points are eyed on Thursday, and they may push the dollar higher. First, weekly jobless claims are set to continue falling, after hitting 684,000 last week – the lowest since the pandemic.

Secondly, the ISM Manufacturing Purchasing Managers’ Index for March is set to extend its gains above 60 – reflecting the rapid growth in America’s industrial sector. Any score above 50 represents expansion.

Both figures serve as a hint toward March’s Nonfarm Payrolls report due out on Good Friday. Economists project a substantial boost to employment, reflecting an acceleration. The mix of upbeat data and low liquidity could be explosive for the dollar.

Final Manufacturing PMIs in Europe were also upbeat, but they are heavily overshadowed by the shuttering in the old continent.

All in all, after EUR/USD stabilized at lower ground, it may be ready to resume its falls. 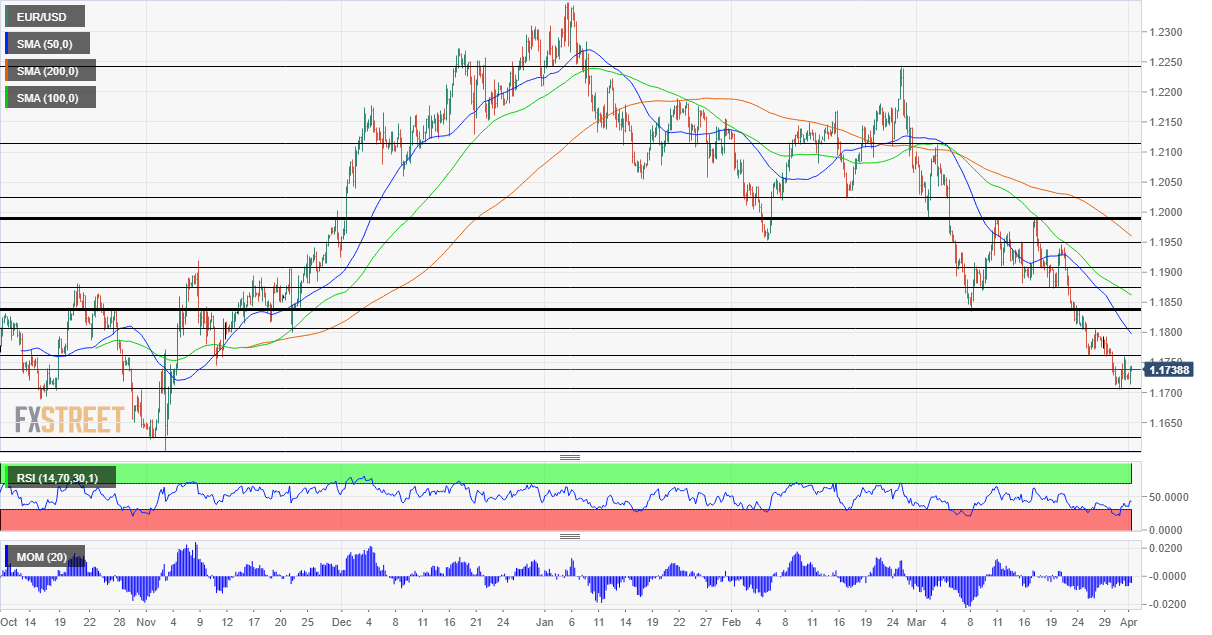 Euro/dollar continues suffering from downside momentum on the four-hour chart and remains suppressed below the 50, 100 and 200 Simple Moving Averages. Moreove, the Relative Strength Index has risen above 30 – leaving oversold territory and allowing for more falls.

Get the 5 most predictable currency pairs
Previous ArticleAUD/USD to suffer a deep correction lower towards the 0.7240 zone – Credit Suisse
Next Article WTI jumps beyond $60 mark as OPEC+ hesitates between output cuts rollover and increase