Latest
You are at:Home»EUR/USD Daily»EUR/US Feb 27 – Steady as Italy Grapples with Political

EUR/USD has leveled off following the volatility which resulted after election results in Italy pointed to a political deadlock. With no party in control of the Senate, there are fears that a prolonged deadlock could lead to a new crisis in the Eurozone. The markets will be monitoring Wednesday’s 10-year Italian Bond Auction, which could be an important indicator of investor sentiment on the heels of the Italian election. In the Eurozone, GfK German Consumer Climate fell within expectations, and M3 Money Supply beat the estimate. In the US, New Home Sales and Consumer Confidence both sparkled. There are two more key economic releases today – Core Durable Goods Orders and Pending Home Sales. As well, Fed Chairman Bernard Bernanke continues to brief lawmakers on Capitol Hill. 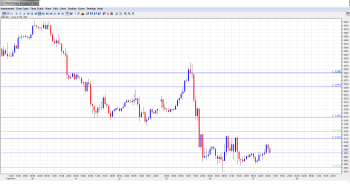 Get the 5 most predictable currency pairs
Previous ArticleEUR set to follow Italian bonds
Next Article USD/JPY:Trading the US GDP (Second Release)