EUR/USD remains under pressure, but is steady in Thursday trading. The markets continue to be nervous about the political stalemate gripping Italy. With no clear winner in this week’s parliamentary elections, there are fears that a prolonged deadlock could lead to a new crisis in the Eurozone. There was some good news as investors showed a strong demand for 10-year Italian bonds. In the Eurozone, French Consumer Spending disappointed, hitting a five-month low. German data continued to look good, as Unemployment Change beat the estimate. US key releases have looked sharp this week, and the markets are hoping to see strong numbers from today’s major releases – GDP and Unemployment Claims. 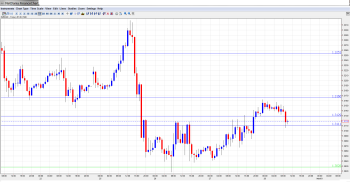 Euro/dollar steady after successful Italian bond auction – click on the graph to enlarge.

Get the 5 most predictable currency pairs
Previous ArticleForex Education. Margin Calculation with USD as Quote Currency
Next Article Risk on? Not so fast