Euro/dollar  had a positive week, riding on the determination of the ECB in using its firepower to counter the Spanish crisis. The upcoming week is even more important, with the German constitutional court’s ruling needed to enable the bailouts. There are quite a few additional regular indicators and special events. Will the rally continue?. Here is an outlook for the upcoming events and an updated technical analysis for EUR/USD.

Mario Draghi provided the goods with the OMT: a plan to buy an unlimited amount of bonds with a maturity of up to 3 years – a wider scope than expected. While full QE was not approved, Draghi did provide a political carrot to Spain – bond buying could happen also with a “precautionary program”– not  necessarily  a troika led program. Assuming an approval in Karlsruhe, the ball will pass to Spain, which is on the edge on many fronts. In the US, weak Non-Farm Payrolls convinced markets that QE3 is coming (even if it isn’t 100% certain), and this significantly hurt the dollar.

Updates: French Final Non-Farm Payrolls dropped 0.1%, matching  the market forecast. German WPI had its highest jump since  February, as the inflation index rose 1.1%.   We could see some volatility in EUR/USD on Wednesday, as the German Constitutional Court rules on the constitutionality of the ESM. As well, voters in the Netherlands go to the polls to choose a new government. EUR/USD was testing the 1.28 line, but has retracted, as the pair was trading at 1.2875. The Euro pushed higher following the German Constitutional Court decision on the ESM. The Court held that Germany could participate in the program, but set a cap of 190 billion euros. French CPI rose 0.7%, beating the  forecast of 0.5%. German Final CPI was up  0.4%, just above the estimate of 0.3%. Italian Industrial Production declined 0.2%, while the markets had predicted a 0.5% decline.  Euro-zone Industrial Production rose 0.6%, easily beating the forecast of 0.0%. Voters go to the polls in the Netherlands, with the results too close to call. The euro rally continues, as the continental currency continues to test the 1.29 line. EUR/USD was trading at 1.2895. The ECB Monthly Bulletin was released on Thursday. The  Bank stated that  inflation rates are expected to remain above 2% throughout 2012, and the underlying pace of monetary expansion remains “subdued”. The report found that there is a  need for structural and fiscal adjustment in many European countries, although progress is being made in this regard. Meanwhile, the markets are eagerly waiting for the FOMC statement, as speculation is high that the Fed will announce QE3 to help the US economy. In the Netherlands election, the conservative Liberal party won the most seats, but caretaker PM Mark Rutte will now be tasked with forming a new coalition government.  EUR/USD has edged downwards, as it dropped closer to the 1.29 line. The pair was trading at 1.2910. It finally happened: the Fed announced QE3 – open ended, $40 billion per month, in addition to more twist and a longer pledge for low rates through 2015. EUR/USD topped 1.30. 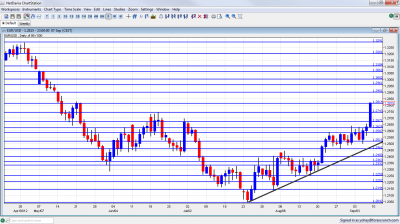 â‚¬/$ started the week capped under 1.2624, in what turned into a triple top. After falling to low ground and a new battle with this line, the pair finally conquered it and reached higher ground. It stopped only at the 1.2814 line (mentioned last week).

We start from higher ground this time: 1.3290 capped the pair during April and is distant resistance. The round number of 1.32 also served as resistance at that time and is minor resistance.

1.3105 provided some support in April and is minor resistance as well. 1.3060, was a clear separator in May and also had an important role beforehand.

The very round 1.30 line is a very important line in case of huge rally. In addition to being a round number, it also served as strong support. It is closely followed by 1.2960 which provided some support at the beginning of the year.

1.29 is also notable after providing some support in May. 1.2814 was the peak of a recovery attempt in May and also capped the pair in September 2012.

1.2520 had an important role in holding the pair during June, in more than one case, and it became stronger in August.  1.2460 is the next minor line of support after providing a cushion for the pair in August.

An uptrend support line can be seen on the chart. After bouncing off the line last time, the line slowly got closer to the pair that remained stable in range. Another move closer saw another nice bounce and the line is far now.

After the huge rally that sent the pair to the highest levels since May, there is room for some correction. The rise came on a better than expected ECB decision, and high hopes for QE3 in the US. These hopes could lead to a disappointment, countering the big steps that Europe is taking to counter the crisis.

The next phase is the German court approval (partially priced in) and the subsequent Spanish aid request, made easier thanks to Draghi. These should balance a potential compromise in the US, in a form of extended guidance instead of dollar printing.

If we get QE3, there’s more room for rises towards 1.30 and beyond. In an unlikely case of a German court rejection of the ESM, 1.20 could be challenged. The more likely scenario is none of these events, and a balanced outcome to a very important week. Volatility is back and is here to stay.

Euro/dollar  had a positive week, riding on the determination of the ECB in using its firepower to counter the Spanish crisis. The upcoming week is even more important, with the German constitutional court's ruling needed to enable the bailouts. There are quite a few additional regular indicators and special events. Will the rally continue?. Here is an outlook for the upcoming events and an updated technical analysis for EUR/USD.     Mario Draghi provided the goods with the OMT: a plan to buy an unlimited amount of bonds with a maturity of up to 3 years - a wider scope…