Latest
You are at:Home»EUR/USD Daily»EUR/USD Jan 30 – Euro Climbs Above 1.35 Ahead of

EUR/USD continues to move higher, as the pair broke through the 1.35 level in late Asian trading on Wednesday. The markets continue to monitor the Federal Reserve policy meeting, which wraps up today. Spanish GDP was a disappointment, dropping to its lowest level since 2009. The Italian 10-year Bond Auction will be released later in the day. In the US, the markets will have their hands full, as there are three key releases – ADP Non-farm Employment Change, Advance GDP and the FOMC Statement. 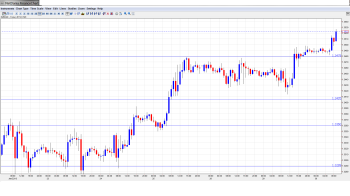 Euro/dollar pushes above 1.35 – click on the graph to enlarge.

Get the 5 most predictable currency pairs
Previous ArticleExpect a Choppy and Unpredictable Finish to a Dramatic
Next Article USD/CAD: Trading the Canadian GDP Jan 2013