Euro/dollar  couldn’t really recover from the recent fall and eventually close a bit lower as Spanish worries intensified. Will it make a bigger break out of range? Two major German surveys are the highlights awaiting us. Here is an outlook for the upcoming events and an updated technical analysis for EUR/USD.

Spain is under growing pressure from all sides: EU inspectors landed in Madrid, Italian officials aren’t too kind and most importantly, the markets are sending Spanish yields higher. The ECB has already hinted about reigniting the bond buying scheme, but may forced to introduce LTRO 3. Also in the US, things were already better: jobless claims broke out of range and joined the weak NFP. QE3 still has low chances, but if the current employment figures turn into a trend, it will not bode well for the greenback.

Updates: EUR/USD dropped to a one-month low in the Asian session, as the markets responded to the news that Spanish banks borrowed a record amount from the ECB in March.  There is concern that Spain may turn to the IMF for help, as Spanish 10-year yields climbed over 6.0%.   The Italian Trade Balance posted a deficit of 1.11B,  significantly better than  the market forecast of -1.85B. The Euro-zone Trade Balance came in this morning at a surplus of 3.7B, well below the forecast of 4.7B. This represents a four-month low for the indicator. EUR/USD has recovered slightly in  the European session,  trading at 1.3032. The German Economic Sentiment posted a reading of 23.4, well above the market forecast of 19.7.  This was the index’s best performance since June 2010. Eurozone Economic Sentiment also drew a cheer from the markets, coming in at 13.1, the best reading since May 2011. Euro-zone CPI came in at 2.7%, slightly above the market forecast of 2.6%. Eurozone Core CPI also was a  touch higher than forecast, at 1.6%.   EUR/USD is on the move upwards, as the pair is trading at 1.3146.  Current Account disappointed, posting a 1.3B deficit, which was a three-month low for the indicator.  The markets  had  predicted a surplus of 4.1B.  The Euro continues to slide, as  EUR/USD is trading at 1.3074.  Spain successfully raised EUR 3 billion in a  government auction.  EUR/USD is managing to stay above the 1.31 level, trading at 1.3113. We could see some movement by the pair before the weekend, with the release of three key US indicators later on Thursday.  Spain sold another EUR 2.5 billion in government bonds on Thursday, but the markets are concerned  that increased borrowing costs could spell trouble for the Spanish economy. The markets are waiting for the key release of German Business Climate on Friday, to close the trading week. 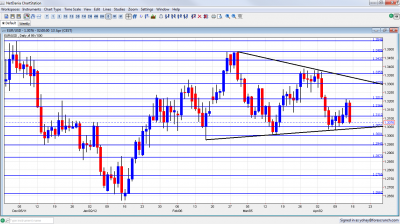 After a short-live move up, â‚¬/$ dropped and found support around 1.3050 (a new line that didn’t appear last week). It then bounced higher and after hitting resistance it turned back and eventually closed at 1.3076, a bit lower all in all.

We start a bit lower this week. 1.3550 capped the pair in November and December and marked the beginning of the plunge.  1.3486 was a distinctive double top in February 2012 and is a strong cap.

It’s closely followed by minor resistance at 1.3437. The pair struggled there when it traded higher. 1.3360 provided some support in February 2012, when the pair was trading on high ground, and is now weak resistance.

Quite close by, 1.33 was tough resistance 4-5 times, with two attempts very recently. It remains key resistance. 1.3212 held the pair from falling and switched to resistance later on. It proved itself as resistance once again in April 2012.  This was the bottom border of tight range trading in February.

1.3050 worked as support in April 2012 and also in March, and is the last frontier before 1.30. The round number of 1.30 is psychologically important and is now stronger than earlier. It managed to keep the pair from falling.

As you can see on the graph, the trading range of the pair is narrowing down. Both lines began in February, with uptrend support being more significant than downtrend resistance. The support line has also been challenged more recently.  Additionally,  here is a fresh Elliott Wave Analysis  of the pair, which points to low ground.

The situation in Spain is deteriorating fast and no respite is seen soon. The ECB will likely keep pressure up on the fourth largest economy of the zone. Things will likely get worse before they get better.

Also in the US, things aren’t good as they seemed. The difference now is that the US economic weakness doesn’t stand alone as a trigger for more QE and dollar weakness: it is combined with an official Chinese slowdown. The combined weakness of the world’s largest economies means risk averse trading, and this doesn’t favor the euro.

Euro/dollar  couldn't really recover from the recent fall and eventually close a bit lower as Spanish worries intensified. Will it make a bigger break out of range? Two major German surveys are the highlights awaiting us. Here is an outlook for the upcoming events and an updated technical analysis for EUR/USD. Spain is under growing pressure from all sides: EU inspectors landed in Madrid, Italian officials aren't too kind and most importantly, the markets are sending Spanish yields higher. The ECB has already hinted about reigniting the bond buying scheme, but may forced to introduce LTRO 3. Also in the…