Euro/dollar  suffered from the refusal of the ECB to help in resolving the debt crisis but its falls were limited. Where will this end? Purchasing managers’ indices, a major German survey are the key figures in the upcoming week. Here is an outlook for these events and an updated technical analysis for EUR/USD.

The ECB cut the rates and helped the banks, but didn’t provide the big bazooka to help solve the struggling indebted countries. In addition, the EU Summit provided nice promises for the future, but no immediate relief. Will the Chinese come to the rescue once again? There are too many doubts.

Updates: Higher Italian yields, fears of a downgrade from S&P and general disappointment from the lack of immediate action in the EU Summit send the pair down below support at 1.3280. EUR/USD fell to a two month low after Commerzbank is on the edge and the EU summit results are weak. After surviving a first approach to the 1.3145 line, the pair got back up, aided by the successful Spanish auction. In the US, Bernanke is expected to make no policy changes. Merkel’s rejection for an enhanced ESM sent EUR/USD to an 11 month low. The euro got another blow from the other side of the Atlantic: Ben Bernanke didn’t provide any policy changes, and this sent EUR/USD to test 1.30. European industrial output disappointed with a drop of 0.1%, but it was a bad Italian auction that weighed on the pair, that is struggling to keep above 1.30. EUR/USD lost 1.30 after a lot of bad news came in. It then managed to recover on a good Spanish auction, good PMIs and positive US figures. Range: 1.30 – 1.3060. 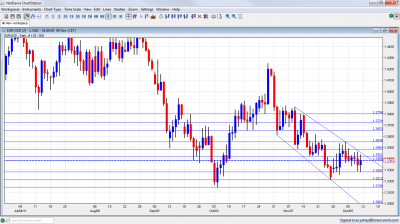 Euro/dollar kicked off the week with a small gap and an attempt to break above the 1.3480 line (mentioned last week). After this attempt failed, the pair dropped and bottomed out at 1.3281 before closing at 1.3382, right in the middle of the range.

After no major changes were recorded, we start from the same point. The round number of 1.38 is minor resistance, capping a recovery attempt in November. 1.3725 worked as support several times in October and served as a pivotal line in the range. It isn’t that strong.

A strong line is 1.3650, which served quite well in recent weeks, and was only temporarily breached. It is one of the more distinct lines in the range. Next we have a tough line: 1.3550 provided support early in September and then switched to resistance after the fall. It proved it can work as good resistance as well, as seen after the Non-Farm Payrolls.

1.3480 is of higher importance now after stopping an attempt to rise in December. It also had a role in September. The 1.3420 line is weaker now but still significant. When this bottom border of the range was broken, it  immediately  switched to resistance.

The level of 1.3380 is the next line. It is a minor pivotal line now once again.. 1.3280 was the bottom in December and is important support on the way down. More important support is at 1.3212 which held the pair just now.

Very important support is at 1.3145 which is the lowest point seen in the current round of the crisis. It is closely followed by 1.3080, which provided some support when the pair was range trading at the end of 2010.

The round number of 1.30 is psychologically important, before the low of 1.2873 seen early in the year. This year to date low is of high importance.

A sharp and widening downtrend channel can be seen on the graph, although it is weaker than earlier. Downtrend resistance begins at the end of October and has been widened to  accommodate  to the changes. Downtrend support was formed later on but is more distinct – it wasn’t violated.

Yes, this isn’t new. The results of the EU Summit provided hope for the future, but no relief for the current funding issues, that can turn Italy’s liquidity problems into a major solvency problem. The welcome rate cut and the measures to aid banks are helpful in buying time, but just show how severe the bank problems are. The deterioration can come from the ongoing high yields or a collapse of one European bank. French banks are especially vulnerable. The situation remains very fragile towards the holidays, that could be used for a Greek departure of the euro-zone.

Euro/dollar  suffered from the refusal of the ECB to help in resolving the debt crisis but its falls were limited. Where will this end? Purchasing managers' indices, a major German survey are the key figures in the upcoming week. Here is an outlook for these events and an updated technical analysis for EUR/USD. The ECB cut the rates and helped the banks, but didn't provide the big bazooka to help solve the struggling indebted countries. In addition, the EU Summit provided nice promises for the future, but no immediate relief. Will the Chinese come to the rescue once again? There…

GBP/USD Price Analysis: Bulls Geared Up for 1.38 amid Hawkish BoE

GBP/USD Price Analysis: Firm Above 1.36 Ahead of US CPI, Fed Minutes