Euro/dollar  fell even further as the crisis deteriorated but recovered from the abyss as bold statements were made by Draghi and other figures. It is now delivery time in a very critical week for the euro. Apart from the highly anticipated rate decision, the calendar is packed with events  . Here is an outlook for the upcoming events and an updated technical analysis for EUR/USD.

Greece unsurprisingly missed most of its targets, Spanish regions are falling one by one,  and Italy  is getting closer to elections. Unsustainable bond yields became even more unsustainable. It is always darkest before dawn, and Draghi can bring this dawn. Leaders of Germany and France joined ECB president Draghi in pledging to do everything to save the euro. The central bank has the tools to act, such as a full QE program among other options) in this dark hour and totally change the course of the debt crisis, or join the leaders by proposing only half measures and sending the euro to an even darker hour.

Updates: Spanish Flash GDP continued on a downward trend, which began in Q1 of 2011. GDP declined by 0.4%, compared to a 0.3% drop in June. Euro-zone Retail PMI fell to 46.4 points. The Italian 10-year Bond Auction posted a yield of 5.96%, up from the yield earlier this month of 5.82%. German Chancellor Angela Merkel and French President FranÃ§ois Hollande  issued a joint statement declaring their deep commitment to the Euro-zone. This was tempered by a statement by German Economy Minister Philipp Roesler that Germany would oppose any large government  bond purchases. The euro  was lower due  to  market doubts about the ability of the ECB to tackle the debt crisis, despite tough talk by ECB head Mario Draghi. EUR/USD was trading at 1.2254. German Retail Sales contracted by 0.1%, disappointing the markets, which had forecast a 0.6% gain. French Consumer Spending came in at 0.1%, just shy of the 0.2% estimate. German Unemployment Change was up seven thousand, better than the forecast of 9K. The Italian Monthly Unemployment Rate had a poor release, coming in at 10.8%. This was well   below the market prediction of 10.2%. Euro-zone CPI Flash Estimate posted a 2.4% gain, matching the market estimate. The Euro-zone Unemployment Rate set another record, hitting 11.2%. Italian Preliminary CPI posted a flat 0.0%, below the market forecast of 0.3%. The markets remain cautious, hoping that the ECB will announce  concrete action, such as steps  to lower Spanish and Italian borrowing costs, which have been reaching dangerous levels. The ECB will hold a policy meeting later in the week. EUR/USD was up slightly, trading at 1.2277. For a change, there was some good news out of Spain, as Spanish Manufacturing PMI was up in the July reading. The index posted a figure of 42.3 points. Italian Manufacturing PMI came in at 44.3 points, very close to the market estimate. Euro-zone Final Manufacturing PMI posted a reading of 44.0 points, a notch below the  forecast of 44.1 points. The markets will be  hoping for some concrete action at  the Policy Meetings  being held by  the Federal Reserve on Wednesday and the ECB on Thursday.  The euro made slight gains, and pushed across 1.23 line. USD/EUR was trading at 1.2213. As expected, the ECB maintained its key interest rate at 0.75%. A press conference will follow the interest rate announcement. No change was made to the deposit rate.  The Spanish Unemployment Change posted a reading of -27.8 thousand, the fourth straight reading in negative territory. The Spanish 10-year Bond Auction recorded an average yield of 6.65%. Euro-zone PPI declined by 0.5%, lower than the market estimate of a 0.3% drop. The euro has moved upwards, and is testing the 1.23 line. EUR/USD was trading at 1.2296. 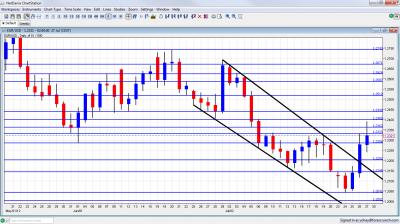 â‚¬/$ began the week with a gap lower, falling over the 1.2150 cliff (discussed last week) It fell as low as 1.2043, before staging an impressive recovery thanks to Draghi. The close under the 1.2330 line shows that the markets are cautious.

Further below, 1.2330 is another historical line after being the trough following the global financial meltdown in 2008. It’s stronger after working as strong support. It should be closely watched. The now previous 2012 low of 1.2288 is of higher importance now after being reached twice.

1.22 is now minor resistance, after serving as such in June 2010.  1.2144 is already a very strong line on the downside: it was a clear separator two years ago, when Greece received its first bailout. Also in July 2012, it worked as a separator.

As the chart shows, the pair made a breakout of out of the short term downtrend channel, breaking above downtrend resistance.

Draghi created huge expectations with his strong words. He has the power to deliver and turn a corner in the crisis, sending the euro far higher. However, high expectations can result in big disappointments and a total plunge. Against the tools that Draghi has, there are also many obstacles, coming from German politicians and the German Bundebank. Currently, it’s hard to tell how this will end. Hopefully we will see some solutions, but recent history points to the other direction.

Until Wednesday, the optimism should keep the euro well supported. Another non-QE3 decision in the US could slightly weaken the pair on Wednesday, and then it all depends on Draghi.

Euro/dollar  fell even further as the crisis deteriorated but recovered from the abyss as bold statements were made by Draghi and other figures. It is now delivery time in a very critical week for the euro. Apart from the highly anticipated rate decision, the calendar is packed with events  . Here is an outlook for the upcoming events and an updated technical analysis for EUR/USD.     Greece unsurprisingly missed most of its targets, Spanish regions are falling one by one,  and Italy  is getting closer to elections. Unsustainable bond yields became even more unsustainable. It is always darkest before…