Euro/dollar  had a terrible week, as it reached fresh 2 year lows losing nearly 400 pips. After the optimism from the EU Summit was totally erased, the euro-zone finance ministers will try to make some progress on Greece and Spain, but the hurdles continue mounting. There are quite a few other events scheduled. Here is an outlook for the upcoming events and an updated technical analysis for EUR/USD.

The ECB not only cut the benchmark lending rate to a new historic low, but also eliminated the deposit rate and admitted that the situation is worse than expected. In the debt crisis front, things aren’t looking rosy in the week after the summit: Finland and the Netherlands oppose bond buying by the ESM, Greece is even worse off than expected and the solution for Spanish banks is not close at all. On this background, the euro will find it hard to recover.

Updates: The trading week kicked off with some  disappointing releases. German Trade Balance posted a reading of 15.0 billion, below the market estimate of 15.7B. Sentix Investor Confidence continued to drop, coming in a -29.6 points. It was the indicator’s worst reading in over three years. Spanish 10-year yields  climbed  above the psychologically important 7% level, reaching  a high of 7.1%. The markets will be closely following remarks by ECB head Mario Daraghi, as he address the European Parliament on Monday. The Euro-zone finance ministers  will als0 be meeting  in Brussels to discuss proposals announced at the EU Summit to help  struggling members and integrate banking systems. The euro has edged upwards, pushing  above the 1.23 line. EUR/USD was trading at 1.2303. French Industrial Production declined 1.9%, a very poor reading. The markets had forecast a smaller decline of 0.9%. Italian Industrial Production looked sharp. The indicator jumped 0.8%, easily exceeding the -0.3% estimate. At the Eurogroup meeting of finance ministers, there was little progress to report. However, an agreement was reached  to extend Spain’s deadline to reach budget targets to 2014, and set the parameters of the bailout package for Spanish banks. The euro is testing the 1.23 line in choppy trading, as EUR/USD was trading at 1.2306. The only Euro-Zone data on Wednesday was the 10 year German Bond Auction.  The treasury  sold EUR 4.15 billion in 10-year bonds at an average yield of 1.31%, a record low, as investors sought safety in German bunds.  At the Eurogroup meeting of EU finance ministers ended with little progress to report. No agreement was reached on  the use of rescue funds to intervene in bond markets and lower Spain and Italy’s borrowing costs,which are threatening to spiral out of control. The finance ministers did agreed to extend Spain’s deadline to reach budget targets to 2014, and stated that EUR 30 billion in aid would be made available to Spanish banks by the end of July.  The euro remains below the 1.23 line, as EUR/USD was trading at 1.2280.    French CPI showed no change, which was a notch better than the market forecast of 0.1%. German WPI came in at -1.1%, well below the estimate of -0.5%. The ECB Monthly Bulletin was released on Thursday. The markets received good news from the Euro-zone Industrial Production. The indicator jumped by 0.6%, well above the market forecast of 0.0%.ECB President Mario Draghi will be addressing a conference in Casablanca. The markets were disappointed by the news that the Federal Reserve had no immediate stimulus plans. Minutes of the Fed’s June policy meeting indicated that Fed would continue to stand on the sidelines and not take any significant monetary measures to bolster the US economy. Bowing to pressure from the EU, the Spanish government implemented an austerity program, which included a raise in the sales tax and a reduction in unemployment benefits. The euro continues to drop following the news from the Fed, as EUR/USD crossed the 1.22 line. The pair was trading at 1.2178. 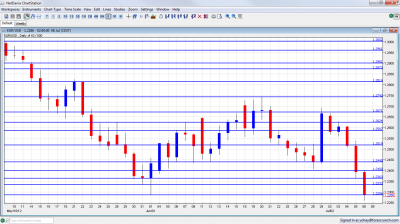 1.2520 had an important role in holding the pair during June, in more than one case, but it’s much weaker now. 1.2440 provided support for the pair at the same time. and worked as the double bottom.

Further below, 1.2330 is another historical line after being the trough following the global financial meltdown in 2008. The now previous 2012 low of 1.2288 is of higher importance now after being reached twice.

Next we have the 1.20 line, which is a round psychological figure. The post-crisis low of 1.1876 is the final frontier before lines last seen in the good years.

Apart from the deepening recession to which the ECB reacted, the debt crisis is getting worse, with the holes in the EU Summit now materializing as well: a solution for Spanish banks could take a year from now, the Netherlands and Finland object direct bond buying with the latter hinting that it will not stay in the euro-zone. This adds pressure on Spain and Italy. And after some calm from Greece, the dire economic situation clearly points to a big compromise in the bailout terms (something that Germany objects) or the dreaded Grexit.

In the US, job growth is weak enough to show that the US will not lead the world to growth, but isn’t weak enough for QE3. This balance is favorable for the US dollar as a safe haven from trouble, yet with a currency that isn’t suffering additional devaluation. 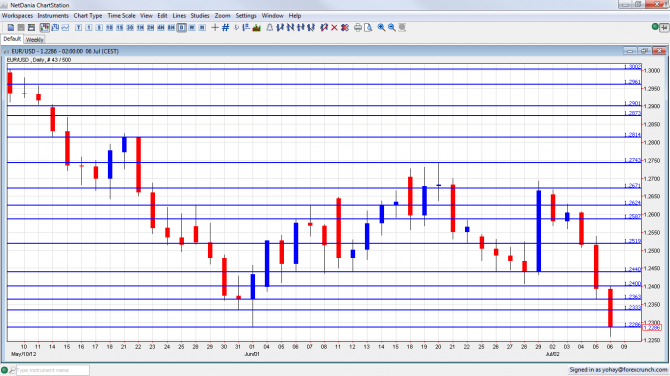 Euro/dollar  had a terrible week, as it reached fresh 2 year lows losing nearly 400 pips. After the optimism from the EU Summit was totally erased, the euro-zone finance ministers will try to make some progress on Greece and Spain, but the hurdles continue mounting. There are quite a few other events scheduled. Here is an outlook for the upcoming events and an updated technical analysis for EUR/USD. The ECB not only cut the benchmark lending rate to a new historic low, but also eliminated the deposit rate and admitted that the situation is worse than expected. In the debt…