Euro/dollar  didn’t need a gap in order to fall again and reach a 22 month low. Greece and Spain just look worse with every day that passes by. Will the common currency fall for a fifth week in a row?   Here is an outlook for the upcoming events and an updated technical analysis for EUR/USD.

The talk about a Greek exit of the euro-zone is accelerating and there are reports that even Greece is actively working on a new currency, just as tax revenue falls again. Spain’s rich Catalonia region needs government help just after the recently nationalized Bankia is asking for more money. And speaking of the rich, Germany is in trouble as well: manufacturing is falling fast, together with plunging business confidence.

Updates: Concerns eased over a Greek exit from the Euro-zone, as a Greek poll indicated that the pro-bailout New Democracy party would be able to form a coalition after the June election. However, the euro gave up these gains on Monday, after Spain announced Sunday that it intends to recapitalize Bankia, the country’s fourth largest lender. EUR/USD was steady in the European session, trading at 1.2577. There are no scheduled releases  in the Euro-zone or US today, as the  markets are closed for holidays in France, Germany and the US. The euro continues to drop, as the markets remain wary about  the  troubled banking sectors  in Greece and Spain. The EFSF transferred 18 billion euros to Greek’s largest banks to help them cope  with  ongoing pressure. In Spain, the government announced the injection of 19  billion euros to Bankia, the country’s fourth largest lender.  German Import Prices fell by 0.5%, an eight-month low. German Prelim CPI will be released later on Tuesday. EUR/USD lost ground, and was trading at 1.2539. The euro continues to fall, on market concerns over funding issues in Spain and Italy. German and Euro-zone releases were a disappointment. German Import Prices fell 0.5%, below the market forecast of a drop of 0.2%. German Prelim GDP posted a -0.2% reading, below the market estimate of -0.1%. Euro-zone Money Supply came in at 2.5%, well below the market forecast of 3.4%. Euro-zone  Private Loans were up 0.3%,  which was lower  than the market estimate of 0.7%.   Eurozone Retail PMI came in at 43.3 points, up  from the April reading of 41.3. The  eagerly-anticipated Italian 10-y Bond Auction recorded yields of 6.03/1.4. The markets will also be scrutinizing a speech by ECB head Draghi later on Wednesday. EUR/USD  was  steady, trading at 1.2448.  The euro finally reversed its downward plunge on Thursday, after some strong data out of Germany and France.  German Retail Sales were strong, posting a 0.6% increase. This easily beat the estimate of 0.1%. German Unemployment was unchanged, but the German Unemployment Rate nudged down from 6.8% to 6.7%. ECB President delivered a speech at the European Parliament in Brussels. The Euro-zone  CPI Flash Estimate  came in at 2.4%, just   below  the market forecast of 2.5%.  Italian Prelim CPI was a flat 0.0%, a notch below the estimate of 0.1%. On Thursday, Ireland is holding a referendum on the EU Stability Treaty, which most EU members have already ratified. If voters reject the treaty, the IMF could hold   back bailout funds, which are critical to an economic recovery.  EUR/USD has edged down, and was trading at 1.2405. 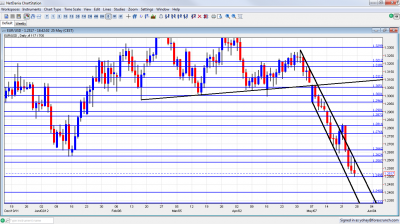 â‚¬/$ opened the week without a gap for a change. After an attempt to climb over the 1.2814 line (mentioned  last week), the pair fell and even dipped under the 1.25 line.

We start from an even lower point this time.  1.3050 worked as support in April 2012 and also in March, and is next frontier above 1.30. The round number of 1.30 is psychologically important and proved to be a place of struggle. After the downfall, the pair made another attempt to fight over this line, but this failed.

1.2760 is a pivotal line in the middle of a  range. It provided support early in the year and is now of high importance. 1.2660 was a double bottom during January and the move below this line was confirmed after a struggle.

1.2623 is the previous 2012 low and remains important, now as resistance. Attempts to rise above this line have been . Below, 1.2587 is a clear bottom on the weekly charts but is only minor resistance now.

The round number of 1.25 is of psychological importance, although not so much on the technical level. This is an important battle line. Another round number is the next support line: 1.24. It provided some resistance in June 2010 and is now minor support.

Further below, 1.2330 is another historical line after being the trough following the global financial meltdown in 2008. 1.22 is minor support below, after serving as such in June 2010.

1.2144 is already a very strong line on the downside: it was a clear separator two years ago, when Greece received its first bailout. The round number of 1.20 is of course highly important in the psychological level.

The steep  down trend  channel is still relevant. It was temporarily broken, but the pair returned to it quite fast. EURUSD is now in the middle of the channel, as the chart above shows. Staying in this channel means steep falls.

Greek polls are once again leaning towards the anti-bailout parties, but markets don’t really need the elections. With the louder talk about contingency plans for a euro exit, the ball is already rolling. While it’s good to know that important bodies are getting ready, the implications of a Grexit for the European banking system and for other countries are not fully priced in. Here’s how to trade the Grexit with EUR/USD.

Spain has serious problems of its own, with the banking system and the regions leaning on the government for money. They are already shut of the markets. How long will Spain remain in the bond markets without help? A coordinated action by central banks can help Spain and lift the euro. So far, the ECB seems very reluctant to budge. The US economy is still OK, and it plays second or third fiddle to the dramatic European events.

Euro/dollar  didn't need a gap in order to fall again and reach a 22 month low. Greece and Spain just look worse with every day that passes by. Will the common currency fall for a fifth week in a row?   Here is an outlook for the upcoming events and an updated technical analysis for EUR/USD. The talk about a Greek exit of the euro-zone is accelerating and there are reports that even Greece is actively working on a new currency, just as tax revenue falls again. Spain's rich Catalonia region needs government help just after the recently nationalized Bankia…